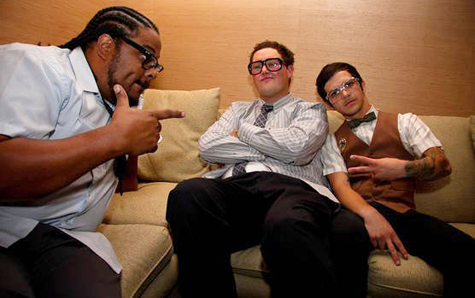 When I was introduced to Who Cares, I heard a group with the purest of intentions struggling to craft music beyond the traditional hip-hop realm, while not betraying its beloved culture. I’ve always admired the courage in a group that was willing to make a song as heavy as “Heaven Ain’t That Hard” and follow it up with a Bambaataa-esque throwback like “They Killed the Radio” with Egyptian Lover.

Despite my admiration, there was a glaring struggle in identity that I always perceived as heavy-handed and off-putting. It was as though Who Cares might function better as two entities, one that loves trans-European electro-party jams and one that is meant to be heard during a rainy-day self-reflection session. Who Cares’ third record, Teenage Ego Trip, released last month, is its finest to date. With the help of an engineer and studio guidance, the album also serves as the resolution of the aforementioned identity crisis.

Easily the wisest move Who Cares made in crafting Teenage Ego Trip was pulling Dusty Brown into the project as its engineer, contributing producer and co-writer. His fingerprints leave evidence throughout the long player as he employs the same trademarks that made his This City Is Killing Me EP an instant classic. With Dusty behind the boards, Who Cares resolved its clash in styles found on the previous CD-R the group peddled at shows. Teenage Ego Trip is rich in texture, featuring a studio band intent on boastfully marauding for abstract sound pieces typically reserved for the likes of Damon Albarn and his Gorillaz project. This makes previous Who Cares efforts sound like skeletal demos; it’s as though the past years of songs were written in order to achieve this sort of breakthrough.

Subtle and lush, no song is without nuance in style that is not only rewarding, but adequate in placement–no tricks for the sake of flare–nor are the instrumental affairs exaggerated or embellished. In the past you could have made a case that Who Cares was wanking off a bit, or that a different perspective was relying too heavily on its virtuosity–take your pick. The choicest amount of care is given to production. Take, for example, the snare drum intro on “Cherry Boy” that’s run through filters, muting the percussion to a pitter-patter that, once refashioned, creates a pop to the instrumentation as Ernie Upton, aka Fernie Fresh, comes in with the vocals. The Who Cares style of old haunts the record in small doses: grandiose sax solos are fed as distant radio transmissions. Young Aundee’s falsetto crooning is employed sparingly, not to suggest it should be, but “These Three Words” is given room to breathe and earn its electro-outro that features an Aundee refrain, instead of forcing a vocalist into a boom-bap production or customizing the boom-bap and running the risk of the cursed “crossover” scarlet letter.

Who Cares is well past its juvenile days of rewriting Pete Rock and C.L. Smooth’s “T.R.O.Y.” a dozen times over. The transformation is strictly from a sonic perspective as Fernie Fresh maintains a deep connection with the disenfranchised and half-broken in his lyrics. Teenage Ego Trip is a well-constructed teddy bear for the latchkey kids and survivors of broken homes that took to the seedier side of life and are seeking to do better with their days and weeks. Perhaps it’s time to heal the gloomy demeanor of the Who Cares bear cartoon, give it a congratulatory pat on the back and put a crooked smile on its worried mug.

Who Cares’ Teenage Ego Trip is available for free download online at www.forhiphop.com.