This Ain’t No Foolin’ Around

When the collective runoff of ballyhooed Sacramento bands Black Licorice and Popesmashers joined forces after a mid-’90s tour, they probably didn’t realize their labor would yield the seeds for the forbidden fruit of dance-punk. They probably didn’t even realize that what they were doing was all that unique. But however you slice it, the niche-malleable !!! (yes, you can pronounce it in any number of thrice repeated bursts of syllables—most commonly Chk Chk Chk, but don’t forget Pow Pow Pow, Bam Bam Bam or any other such triadic inference) introduced to the fringe-stream a hypnotic freak beat mythos that spawned more bastard-children experimentalists than had Wilt Chamberlain studied Blondie rather than basketball. Their symbiotic mastery of marrying organic jams into heady blips of post-punk funk has afforded them opening slots on major tours (2006’s opening slot in support of Red Hot Chili Peppers in the UK), and has paved the way for the moderate successes of their last two studio albums: 2004’s Louden Up Now and 2007’s acid-punk/funk field guide Myth Takes. The band is currently on a brief West Coast tour, slowly wrangling their brigade from various corners of the country to once again coalesce and steer the vessel even deeper into uncharted waters, or as guitarist Mario Andreoni alluded to Submerge, to blindly forge straight into the dock. Either way, bring a life vest and some deck-safe dancing shoes.

!!! has its foot planted nowhere specific musically. How liberating as an artist is it for you to not feel pressure to homogenize your craft to fit into a niche?
Well, we do tend to work on things that have a strong rhythmic foundation so”¦ From there, it’s pretty wide open though. I don’t worry too much about the rest.

The indefinable aspects of your music often surface as the focal point of it as well; abstracts become hooks, dissonance becomes harmony. Are you ever concerned that by way of the indefinability of your music that your songwriting is guided toward that indefinability rather than emerging from an organic jam?
If part of me was concerned about that, I’d want the other collective parts of me to punch that part in the face.

Being one of the forbearers of the progressive dance/funk scene, what trends do you see infiltrating the mix that you guys are really into? Which trends are you seeing that you think are detrimental?
Being a fan of lots of old obscure/odd/forgotten dance tunes, I tend to really like freaky re-edits—creative DJs or producers reinterpreting songs, making them longer, adding bits. What I dislike, though, still comes down quality. I want a good tune. Subjective, I know, but I don’t keep up on what [the] latest things [are] in any musical genre—sort of blissfully unaware.

Is the band still spread out across the country? And if so, how is your chemistry affected when you reconvene for small tours like the one you’re on now, or when you get back together to create music?
Yeah, most of the guys live in Brooklyn while Allan [Wilson, horns, percussion] and I live on the West Coast. We toured most of last year and that probably had more of an affect on our chemistry than the separation ever did. I’m frankly used to [the separation], although it’s certainly not the easiest way to make music as a band.

In what ways do you feel making an artistic statement with your music is important? How does that stack up against playing music just because you enjoy it? And where do those two roads cross paths for !!!?
When creating, I don’t make the distinction. If we’re working on a tune and it makes me smile, gives me goose bumps or some other crazy feeling, I go with it.

What are the band’s plans for a new album?
Working on new tunes now. Ideally, I’d like to have most of it recorded by end of this year, but we’ll see. It’s still early in the process. The goal is to keep making better records, which I think we’ve done. I’m sure it’ll slam though.

In what ways has the Sacramento music scene changed since you guys began playing?
!!! came out of a pretty tight downtown community. Once that “ended,” I’m not sure who picked up the torch. I sure hope there is some weird small scene brewing in Loomis, or Rancho, or Folsom”¦doing more than just anger-rock that is, which seems to be a pre-requisite to getting any “pro” rehearsal slot—in just about any city. People outside of Sacto always wonder about what was going on around the time we formed; it was really great to be around so many smart, supportive and open-minded music snobs. 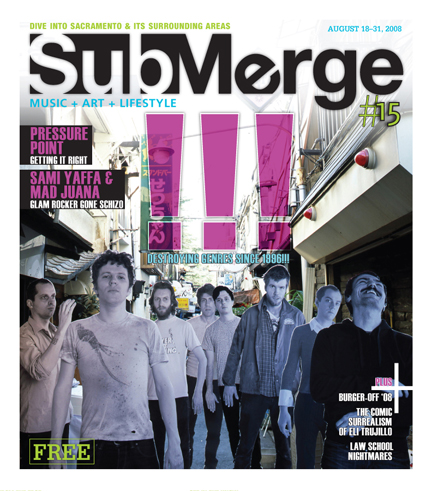