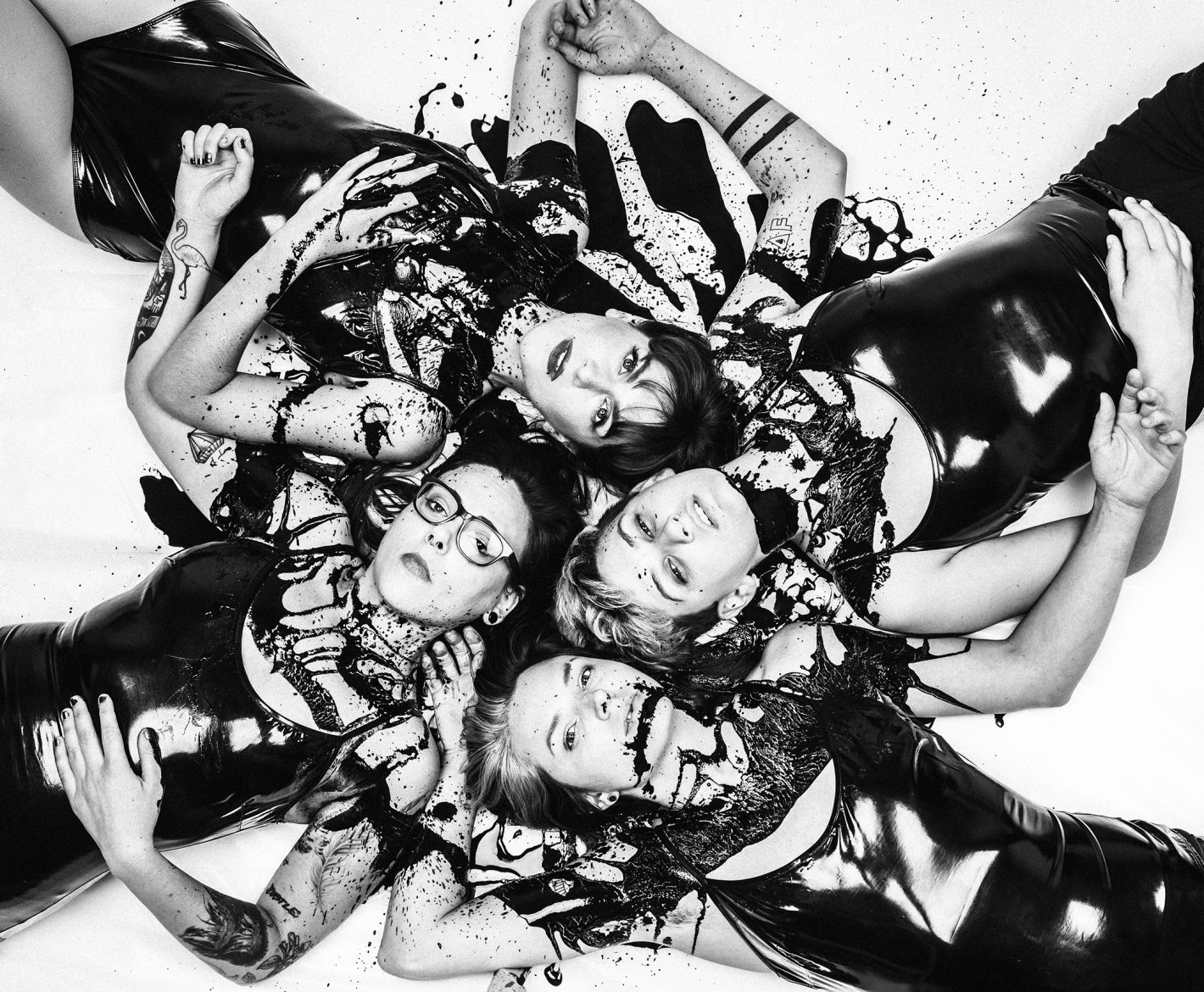 Thunderpussy is not just an all-girl band; they’re a skull-crushing, kick-ass rock juggernaut. But even skull-crushers have feelings. As evidence, drummer Ruby Dunphy was getting wrapped up from a fresh tattoo when we connected to discuss her band and their upcoming performance at the Crocker Art Museum ArtMix event, FIERCE, in March. Dunphy took a seat to chat while watching her friend get a matching tattoo—Russian symbology that means there is no revolution without evolution.

“I’m such a bitch getting tattoos,” jokes Dunphy. “I’m just crying the whole time. I wish I wasn’t like this.”

Dunphy, Thunderpussy’s newest member, moved to Seattle to attend Cornish College to study art. She vowed she wouldn’t start a band until she graduated—she was going to focus solely on her studies. During her first week at college, her trombonist friend grabbed her arm and said, “I’m going to introduce you to your new band,” to which Dunphy sharply replied, “Go away, I don’t want a band.”

But this was meant to be. Dunphy was promptly dragged to Joe Bar across the street from her school, where Molly Sides, Thunderpussy’s lead singer and a barista at the time, was introduced to her new drummer.

“Molly wouldn’t let me go,” laughs Dunphy, who reports she was courted by borderline harassing texts until she finally caved. She agreed to help the band out “until they found their real drummer.” Famous last words.

“Thank God Molly was so persistent,” says Dunphy. “I was so lucky.”

Wrapping up her last semester of her fourth year of art school, Dunphy is slated to graduate in May, and simultaneously has managed to be in a band that is skyrocketing to stardom. Recently signed to Universal Records under their subsidiary Stardog Records (which is a subsidiary of Republic Records), Thunderpussy is releasing their long-anticipated debut album in late May. When I say long-anticipated, I mean I’m panting like a dog waiting for this LP to drop.

With multiple offers on the table from labels thirsting for Thunderpussy, Stardog Records felt like the right fit because of their family vibe, affiliation with their Pearl Jam friend Mike McCready and Thunderpussy’s deal-sealing whirlwind trip to New York when they visited Universal Records’ headquarters.

“It was the craziest experience I’ve ever had,” remembers Dunphy. “The things they were offering seemed so attainable because of the artists they have, like Drake and Amy Winehouse. It was like, well, you did it for these people …”

After years of saving every penny the band made to reinvest back into the band, and hustling independently, the ladies of Thunderpussy are all now living the rock ‘n’ roll dream that for so many bands never comes true. They’ve all quit their day jobs, yet it’s impressive that Dunphy has stuck with her education in spite of her band’s success.

“My days are really filled,” says Dunphy when I asked her how she manages the workload. “I’m getting a tattoo right now only because I’m blowing off my homework. In the end it all gets done. When we’re on the road, I’ll be in the green room doing my homework, or in the van studying and shit. My teachers are super cool and for the most part understand everything, and luckily I have the other three members to help respond to emails and get me to where I need to be sometimes.”

Every member of Thunderpussy has been a lifelong musician, and it’s evident in the skillful execution of every live set. Sides was born a performer incapable of not dancing, and graduated from Cornish College as a dance major. She has been a singer all her life, too, and was in a couple bands prior to forming Thunderpussy. Leah Julius, the bassist, was a drummer all her life and has been in countless bands before learning to play bass. She also currently plays in the band Sundries “who fucking rip,” explains Dunphy. Whitney Petty, Sides’ lover and partner for the past six years and Thunderpussy’s sick guitarist, was also a long-time drummer in many bands before finally teaching herself guitar. Dunphy is a classically-trained jazz drummer.

“It’s the one thing I know how to do. The only skill I have in my whole life,” jokes Dunphy. Her jazz influence shines through in Thunderpussy’s sophisticated time changes.

Their sleazy rock ‘n’ roll sound is gigantic, dwarfed only by Sides’ and Petty’s palpable sensuality and onstage romance, and Sides’ melodramatic, convulsing, writhing, hair-flipping command of the audience. Her powerful vibrato is akin to Grace Slick’s knifing vocals, and the band’s mastery of their craft conjures the gods of rock.

Inspired by one another, songwriting generally begins with Petty and Sides at home, and song starts are brought to practice and arranged by the group.

“The ‘Speed Queen’ is this mythic and magical woman who rides a motorcycle and travels around the country,” shares Petty in the band’s bio. “Nobody knows too much about where she came from or where she’s going, but she changes everyone she meets because she’s that powerful. I was thinking of Molly when I wrote it… People talk about that magic. There’s some voodoo happening between Molly and I, which is like a cosmic connection. She has this power. Somehow, I’m under her spell when we’re performing—we all are.”

It was the magic of their live performances that has catapulted them to notoriety, making them such a hot commodity before they even put out a record. In fact, a focus on performing live has always trumped recording for the aptly-named Thunderpussy. In addition to their tour, Thunderpussy is playing Sasquatch Music Festival and SXSW this year.

“So much of Thunderpussy is performance. I prefer smaller clubs and audiences because I like to look out and make eye contact with people, and joke around with people and smile. And after the show, I love having women come up to me. My favorite fans are older women and young girls, who come up to us after the show and are like, ‘I’m going to play drums now.’ I want to cry every time. Recordings can do that, but I’m selfish—I like to be in the moment and experiencing it live,” beams Dunphy. “I go bucket drumming every weekend on Capitol Hill in Seattle just for that reason, just to make people dance and have a good time.”

And when Dunphy plays music, it transforms her emotions, too.

“Last year we played a show where I was insanely angry because I had just got off the phone with somebody who had just had something tragic happen to them,” recalls Dunphy. “I hit the drums harder than I ever had. And midway through the set, I look up, and Molly, Whitney and Leah could tell, and they responded to how I was playing. Everything shifted in that moment to pure happiness, and pure family. I love them.”

See Thunderpussy live as part of the Crocker Art Museum’s ArtMix event, FIERCE, on March 8, 2018. Rituals of Mine will also be performing a special DJ set. For more info and to register for tickets, go to Crockerart.org. This is a 21-and-over event. Crocker Art Museum is located at 216 O St., Sacramento, and the event will start at 6 p.m.