Weaned on the sounds of the ‘50s and ‘60s, Todd Morgan and the Emblems create modern tunes on their new album

It’s hard to beat the energy of a live show played by enthusiastic young musicians, especially when they’re rocking out to universally loved jams from the ‘50s and ‘60s. Todd Morgan and the Emblems originally formed as a ‘50s cover band—a tribute to the great rock ‘n’ roll legends that had a lasting influence on lead singer/songwriter Todd Morgan. While their sound has evolved from those early days into more modern rock, the band’s energy hasn’t diminished.

Todd Morgan and the Emblems is, at its heart, a group of early-20s musicians who appreciate good, old-fashioned rock ‘n’ roll. Today, the band members are Todd Morgan (vocals/piano/guitar), Patrick Owen (guitar), Jessica Luna (bass) and Cameron Womack (drums). But as so many band stories start, Todd Morgan and the Emblems was formed with a different lineup and a different sound. As a junior in high school, Morgan put together a band that would play a combination of ‘50s cover songs and some of Morgan’s original songs. They recorded their first album in 2009.

From there, the music went through a transition. Old-time music would always be an influence, but Morgan decided he wanted to write something more modern. The band released its second album, Reality, in 2012, which Todd says was the debut album for their current style and sound. The band still plays ‘50s and ‘60s at live shows, and there’s no denying the influence of that era on their current sound, but it’s all modern rock now.

The sound of Todd Morgan and the Emblems is hard to characterize by a particular genre or sound, although “rock” is an obvious label. “I write catchy pop things … It’s basically pop music in the same vein as the Beatles were pop music, or Elton John, or Michael Jackson,” Morgan says. “It’s pop music but I try to put something there that’s not just catchy because it’s repetitive but catchy because the melody makes it catchy.”

The band doesn’t try to hit a particular demographic or audience with their music—they go for what they think the greatest capacity of people will gravitate toward. “Not in a milquetoast kind of way, but actually make something that tries to be as good as possible so it brings people to the same table,” he says. “I want everybody to dig it.”

While always interested in music itself, Morgan’s interest in becoming a musician didn’t start until high school, when he started attending Rio Americano High School and getting involved with the band program. He remembers it being very dismal at first—the school is known for its band program, and he felt he was in way over his head. “I could play in one key and keep time,” he says.

The day he remembers best was the day they held auditions to see what band each person would be in. They put Morgan into the back room to practice. “It felt like a put-down,” he says. But he worked on learning the new tunes and chords he was instructed to.

“I’m glad that approach was taken. It made me realize these are things you have to know to fit in with other musicians,” he says. Now, he feels confident he can go into any city, any club, and find common songs so that he can jam with other musicians.

The competition introduced through his high school band program had a lasting effect on Morgan.

“Musicians at that age are pretty cocky. They will laugh at you and put you down the second you make mistakes. But a lot of them are really good musicians so you can learn from them,” he says.

Morgan admits he’s always been competitive, and the fear of falling behind drove him to work harder and practice more. By the time he was ready to put together his own band, he was primed to practice five hours a day or more and make a solid effort at a career as a musician.

Today, music is Morgan’s full-time job, and he’s not afraid to put in the work required to create something that is good on a very real level, not just something that people will like. He is very interested in the production element of the music he creates as well—probably more than many artists.

“Anything I’m involved in that my name is going on, I want to know what was used in it,” he says. To him, the technical is part of the music. “The tone or the way it’s edited … it’s all part of what ends up being the performance.”

Morgan was particularly involved in the production of the band’s “Crazy Cryin’ Blues” video, released toward the end of 2014. The song, from their previous album Reality, was originally by ‘30s-era musician Memphis Minnie. The video was shot at Sacramento’s historic Ryde Hotel near the Sacramento River, which was once an actual speakeasy. This video is a tribute to Prohibition-era music, set in a speakeasy with gangsters, flappers and even a Tommy gun. An interesting fact about said Tommy gun: they couldn’t get the permit to shoot a gun in the video, but Todd was against adding an effect in post-production—he thought it would look phony. Instead, they added some real smoke and mirrors.

“You see the Tommy gun, then you see the look on the guy’s face, and then right when he’s going to shoot, we took a strobe light and flashed it at the shooter’s face like he’s shooting,” Morgan explains. That took care of the flash of gunfire, but there was still the problem of the bullets. Cue Morgan, standing underneath the camera, throwing bullets. “Everybody said, how’d you get the Tommy gun? That was their favorite part. It was so much better than had we done it with computer graphics.”

Their main efforts over the past year have been on their new album, Sweet Pretender. Morgan feels it is their best yet.

“I think a big part of what you do on a record is to try and capture the energy of live,” Morgan says. To this goal, the new album definitely succeeds. Songs boast catchy hooks and lyrics, smooth vocals, a strong and consistent beat, and a certain energy that resonates even after the song is over.

When asked what he predicts fans will like best, Morgan says he never knows. “The musician can’t predict a hit to save their life,” he laughs. He does mention that he thinks “The Only Time” is the most radio friendly track. Other tracks that could become singles, he guesses, are “Love and Affection” and the title track.

In addition to the buzz and excitement surrounding the release of the new album, Todd Morgan and the Emblems were invited to sing the National Anthem at the June 27 Oakland A’s game against the Kansas City Royals. It was a “1965 Turn Back the Clock” event in honor of when the A’s called Kansas City home. The woman in charge of bookings had heard Todd Morgan and the Emblems last year at Carmichael Park and sought them out personally.

Morgan says there is one thing that has surprised him about the music business: “I thought it would be easier to get famous,” he laughs. “I thought all you had to do was be good at it.” Luckily, Todd’s ultimate goal is not to be famous—in fact, he says he’d rather avoid the headlines than be famous for the wrong reasons. His ultimate goal in making music is simple: to create something that makes people happy.

Catch the CD release show for Todd Morgan and the Emblems’ new album, Sweet Pretender on Aug. 14, 2015, at the Fair Oaks Community Clubhouse (7997 California Avenue) in Fair Oaks Village. Admission is $5. Learn more about Todd Morgan and the Emblems at Facebook.com/toddmorganandtheemblems or visit their official website: Toddmorganandtheemblems.com. 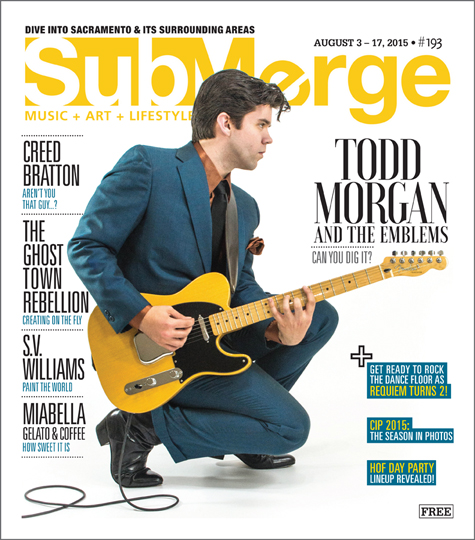