Florida melodic metal band Torche are anything but upstarts. The band formed from the ashes of stoner doom band Floor in 2004, releasing their self-titled debut in 2005, followed by their critical and commercial breakthrough Meanderthal in 2008, a number of EPs, splits and singles, and two more full-lengths including their most recent, Restarter, released earlier this year on Relapse Records.

In each case, these releases have been followed by the requisite national and increasingly international touring, which brings them through Sacramento, Aug. 2, 2015, at Harlow’s. But according to bass player Jonathan Nuñez, this repetition isn’t necessarily a grind.

“Its a cycle, and luckily for me, I love recording, I love equipment, I love playing; it’s a gratifying circle as opposed to a vicious circle,” says Nuñez via cell phone from the Fargo, North Dakota stop of band’s current tour with Japanese noise legends Melt-Banana. “I wake up and I want to go do that drive and play that show, or wake up and work on a record. And those two things complement each other, so I’m not complaining. I’m super excited and I want to keep doing both things for as long as I can.”

Torche’s consistent roadwork, paired with the band’s uniquely accessible take on sludgy, riff-driven metal has put Nuñez and his bandmates—vocalist/guitarist Steve Brooks, drummer Rick Smith and guitarist Andrew Elstner—in the enviable position of being able to not just continue to record and tour, but to attract fresh legions of followers with each release cycle. Although Restarter marks, in a certain sense, a return to the band’s heavier roots following 2012’s more upbeat (not to mention suitably titled) Harmonicraft, Nuñez says that one thing the members of Torche have learned over the last decade-plus of playing obscenely loud music, is that there’s certainly more than one way to be “heavy.” 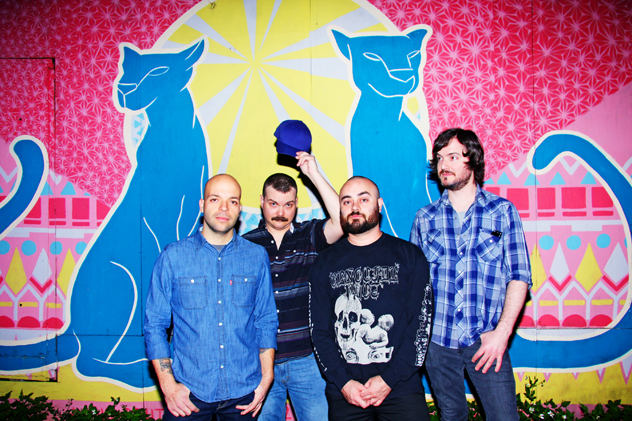 How have the dates with Melt-Banana been so far? That’s a pretty far out pairing.
It’s been great. We’re big fans. We played with them in Tokyo years ago and it was awesome, so it’s been cool to follow up and do a proper tour.

Seems like you keep it pretty open, as far as the kinds of bands that you tour with.
For us, I feel like we have less limitations because we have a pretty broad sound. I mean, it’s all generally loud and heavy, but we try to do our own thing and have fun with it, and that allows us in the end to tour with different bands, sometimes bands like Melt-Banana, who are an influence.

It also seems like Torche has made a point to explore the different ways of being quote-unquote heavy with your music. Is that something that has been a goal?
Yeah. I mean, there were classic rock bands that were heavy, and they weren’t anywhere near using as much distortion or dropped tuning as modern heavy music. Shit, you have the right drummer, and you’re already 40 percent of the way there. And it’s cool when bands switch it up; to me, that’s what makes a record. You have slower songs, faster songs, meaner songs, happy songs, whatever. To me, I prefer records that have different moods, but are all cohesive within a certain sonic umbrella of the band and identity; the actual delivery of every song can vary, but it’s still the band’s sound. And I feel that we have that. We’re not doing 10 or more songs that all sound the same because that would be boring. So with us, I think we have a certain freedom. Even our upbeat happy jams, they’re gonna sound big, they’re gonna sound heavy. It’s all in the delivery, each instrument’s voice and role in the band. It’s what you make of it. Certain people think it has to do with sticking to one genre or one sound, but you can switch it up a bit, and then when we do certain things it becomes way more effective and harder hitting, actually.

Do you feel like your most recent record, Restarter, is the most successful that you have been at varying your sound and making your music more accessible?
I think its varied, like all of our records. But I definitely feel that this record is one of our heaviest releases, if not the heaviest. But there are still songs like “Loose Men” or “Blasted” and even the sci-fi one “Restarter” that are all heavy in their own right, and they’re definitely thick, no less thicker than any other song on the album. We weren’t predetermined, it’s just the way it happens; we write all sorts of stuff. And you know, within 17 songs we might only keep a certain amount because we feel it fits within this cohesive collection of songs for a record. But I feel like … accessible? Maybe? We like hooks. To me it feels like there’s catchy stuff in there and it’s memorable. If it’s not catchy and it doesn’t draw our attention and we don’t think it’s memorable, we tend to put it to the side. But I feel like if anything, Harmonicraft was probably the most accessible out of all of our records as far as what I would consider accessible.

How has the reaction been to Restarter? Has there been any pushback from people who maybe wanted to hear you guys go further with the sound of Harmonicraft on the new record?
With this record, I feel like, we’ve had good luck. We’re hard on ourselves when we’re putting together music that we actually like and want to play, so it feels good when it’s well received, and I feel like this album has had a really great response, not that any of other records didn’t, because I feel like they all have. With Harmonicraft, there was a whole new wave of fresh interest and people were stoked on the band with new people coming to our shows. It was an exciting record and exciting time. And this one is even more so, because it’s the complete opposite of that record. That record was a brighter, biting sounding record. Where this is darker, smoother, way thicker; to me, way heavier. There’s a certain moodier vibe, as opposed to Harmonicraft, which was more of an upbeat, party-time record, at least in my eyes. Where with this one, there’s still the party tracks and the happier songs and all that, but I think the heavier, sonic properties of the record hit way harder. People that like our band were just, “Holy shit, this is massive.” I feel like with any record we release, it’s very liberating to explore different aspects of the sound and keep the band interested and engaged and having fun and it seems to just mirror back with the response we’re getting from people who like our band and are buying records and coming to shows. It feels good. I feel like this record has reached even further and maybe even brought in new people who may have heard the name and never really got around to checking out the band.

Has being on Relapse helped as far as getting some new people to check out your music?
I feel like every label we’ve worked with has offered something new as far as visibility with the band and exposure. So Relapse was kind of a return to a heavier music based label, and they’re super into what they do and they’re genuine music fanatics. And they were telling us they’ve been into it since the first record, so they were really stoked to work with us. It seemed very much the right choice, early on. And now having released the record, I feel like it was the best move we could have made and it feels right. We feel at home, working with those guys.

Is the plan for now just to keep hitting the road super hard?
Yeah, once you release a record you have to go ahead and put in the time. In a way, it’s work, but it’s also fun to enjoy the fruit of your labor, if you will. You put in the time writing songs, recording them, waiting for the artwork to come together and pressing it on vinyl, and waiting for the release date. Then once it’s out, maybe you’ll do a music video, and then once that’s done, then you hit the road. But we have a good flow. It seems like it’s every other month: Hit the road, then go home and have a little break. Keeping that balance keeps it relatively fresh and keeps everybody into it.

Check out Torche live at Harlow’s on Aug. 2 with Wrong and House of Lightning. Doors open at 7 p.m. Tickets for this 21-and-over show are $13 in advance and can be purchased through Harlows.com.