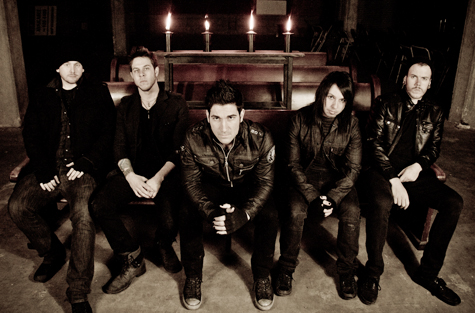 Track Fighter reap the benefits of 10 years of hard work

Ten years ago, Track Fighter frequented old venues like the Underground in Roseville, writing material at the time guitarist and only original member Dino Vidovich describes as “emo, metalcore shit.” On top of their dissatisfaction over the sound the band represented, members were at odds, forcing a new incarnation of Track Fighter to emerge with new members, including guitarist Mike House, vocalist TJ Chopelas, drummer Jeff Wathen and bassist Bobby Martin. Yet there’s always the aftermath when a band reforms under the same name. Or the “baggage” as the guys so candidly phrased it in front of Shine coffee house one afternoon. Keeping the same name was ultimately a unanimous decision and quickly motivated the band to start fresh with conviction and purpose. A new sound paired with an idea to expand their fan base nationally mixed with a lot of sacrifice catapulted the five friends into a direction many bands only dream about within the music industry. On June 1, 2012 Track Fighter signed with record label Silent Majority Group, a subsidiary of Warner Music Group. Owner of the label Jeff Hanson, is also the band’s manager and his roster of musical gems includes Creed, Paramore and Sevendust.

“I just have a lot of respect for what they’ve done on their own up until now,” says Hanson of his newest band’s work ethic. “They went out and toured around on their own dime and were able to make it happen just hustling. They did their own radio promotion. And when you find a band wanting to do it themselves, it makes you a little more apt to want to work for them and help them out. Track Fighter deserves their shot.”

And it doesn’t stop there. The guys are set to release their new, five-song EP at the Boardwalk on July 13, 2012 called Revenge, which Chopelas says, “Definitely has a story behind it.” A fitting title for a group who has won numerous awards and even contests presenting opportunities to perform alongside bands like As I Lay Dying, Deftones and more during the Taste of Chaos tour at Arco Arena six years ago. What was once a struggle under their original moniker is viewed between band members as accomplishment and motivation especially when the new EP is mentioned. Not only did members of Track Fighter set out to prove to Sacramento they work hard and are a force to be acknowledged, they ultimately wanted to prove to themselves they deserved a shot to tour internationally or perform alongside bands like Papa Roach or Oleander–and now, they have.

How did you feel learning Track Fighter is now represented by Silent Majority Group?
TJ Chopelas: Oh my goodness. I cried. It was just amazing. It was like vindication. We’ve worked so hard for it. I don’t think people understand that because we aren’t very public about the inner workings of our band. Now we finally have the chance to actually be successful at this. We all want to do it for a career and we’re finally getting the opportunity after all this time. It’s so gratifying. In a really weird, roundabout way, it has finally paid off.

Tell me about recording Revenge in Tennessee.
Dino Vidovich: We were like screw it. We’re going to do everything ourselves. Make the best record we can make on our own. We went out to Nashville, Tenn., and we recorded with Malcolm Springer and worked with him for the last year-and-a-half just getting this thing ready. He’s worked with Matchbox Twenty, Collective Soul [and] Fear Factory. With Matchbox Twenty, the first record they did he mixed and engineered.

How would you categorize the current sound of the band?
DV: It’s hard rock. We just try to appeal to more of a mainstream audience. It’s not all screams, but it’s not all pretty singing either. It’s a mixture of everything. There’s conviction behind it. This is just what we do and what we play and hopefully people like it.

Besides Deftones, what is another band you’ve performed alongside?
DV: We opened for Papa Roach at Ace of Spades last February. It was completely sold out over two nights. They wanted some local bands that were working hard and making it happen. I don’t even know those guys very well, but they picked us and it was this huge honor.

Where do you want music to take you?
DV: I want to play festivals in Germany, all over Europe. I want to come here and sell out Memorial Auditorium and just do the damn thing. Playing in front of 10 people, well, that shit’s fun, too. We have a lot of work to do, but it doesn’t seem like an impossible goal anymore.

What advice do you have for other Sacramento musicians striving to be represented?
DV: It has to be fun otherwise you’re not going to want to do the work for free. But, you have to understand there’s a lot of shit that you have to deal with that most people don’t want to deal with, and they wonder why things don’t happen. A lot of bands and people get discouraged. There’s a lot of hard work for free. For years. Treat your band as a business.

What are you most proud of after all the years of hard work in Track Fighter?
DV: As soon as we got the new lineup, regrouped and did everything new almost immediately we went out on a national tour. The first show was in Reno and then we went all the way to Utah, Colorado, Michigan [and] the South. We toured most of [2009 and 2010]. This is my first real band, and it’s just a matter of time now. We started over with a new incarnation of the band, and we had to win the respect back from everyone. We were going to overcome that, and we did.

Come snag a copy of Revenge at Track Fighter’s CD release show at the Boardwalk on Friday, July 13, 2012 with supporting performances by For All I’ve Done, Overwatch and more. Doors open at 6:30 p.m. with advance tickets at $10 or at the door for $12. The show is all ages.