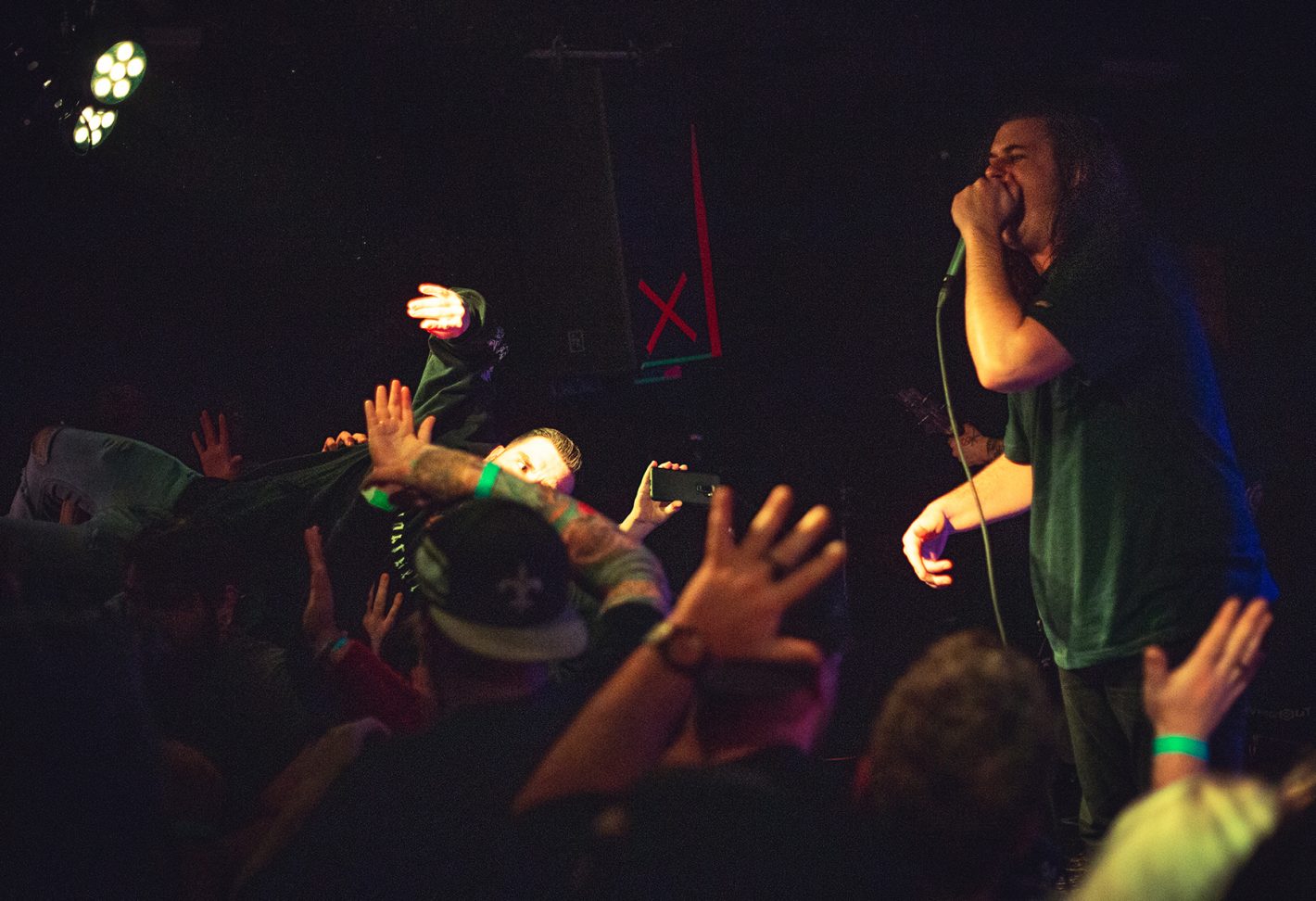 The deathcore band Traitors brought a stacked bill of down-tuned, punishingly heavy bands to Holy Diver for their The New World Order Tour on President’s Day, and the metalheads of Sacramento came out in full force. The densely tattooed and pierced crowd threw down the hardest for the touring acts, but they also showed up early—in number and energy—for their local scene. 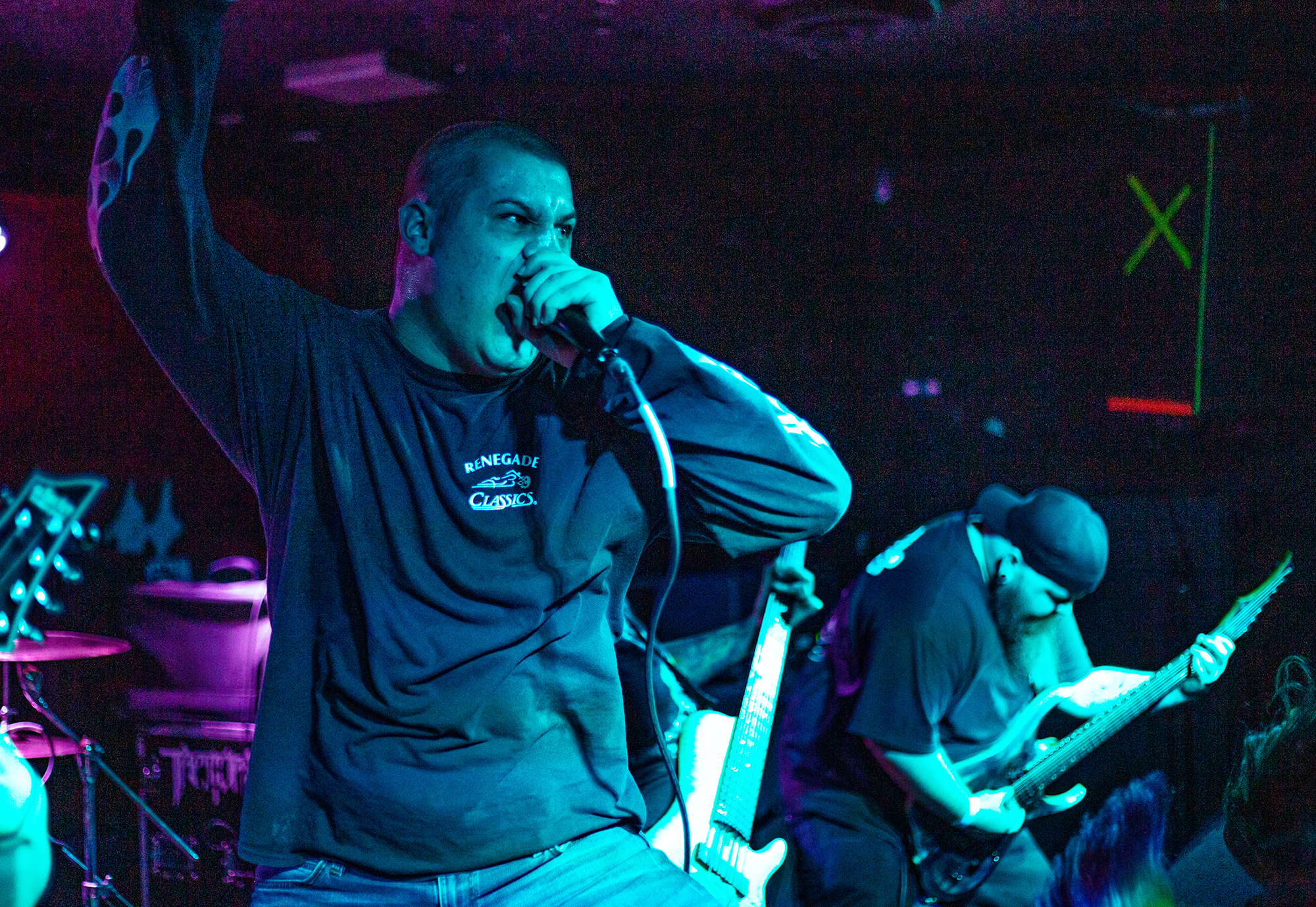 The night started loud, low and heavy with Sacramento deathcore outfit Hard Knox, and it didn’t let up from there. Next up was A Waking Memory, whose style mixed beatdown hardcore with atmospheric death metal riffs. Rounding out the local openers was Desolist, who played an impressively tight set full of galloping djent rhythms with lightning-fast melodic riffing. 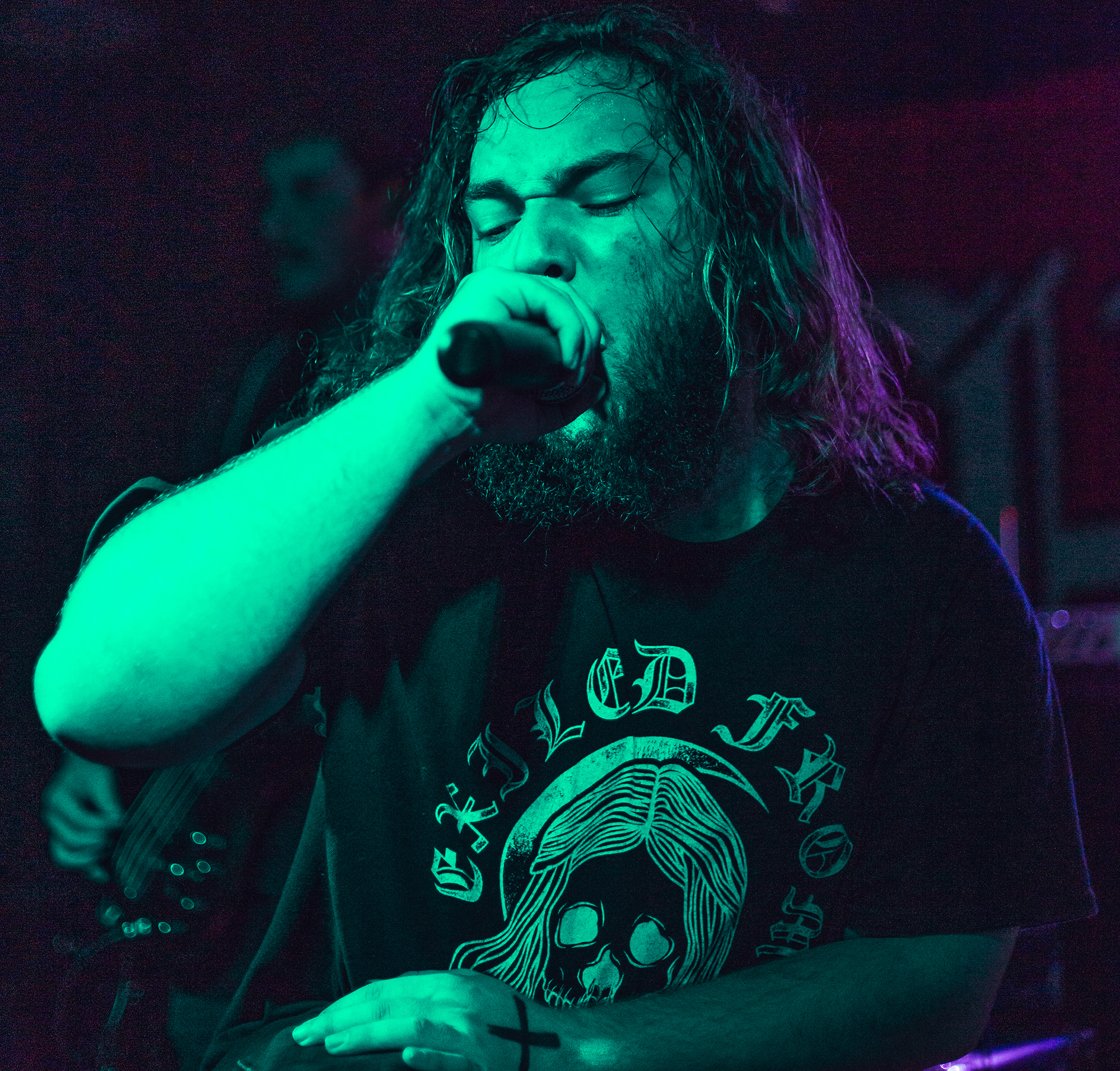 You might think that in between sets of pummeling music, you might want something lighter to cleanse the palate. Not this crowd! During each set change, the engineers filled the room with down-tempo metalcore, and everyone enjoyed the relentless sonic onslaught. 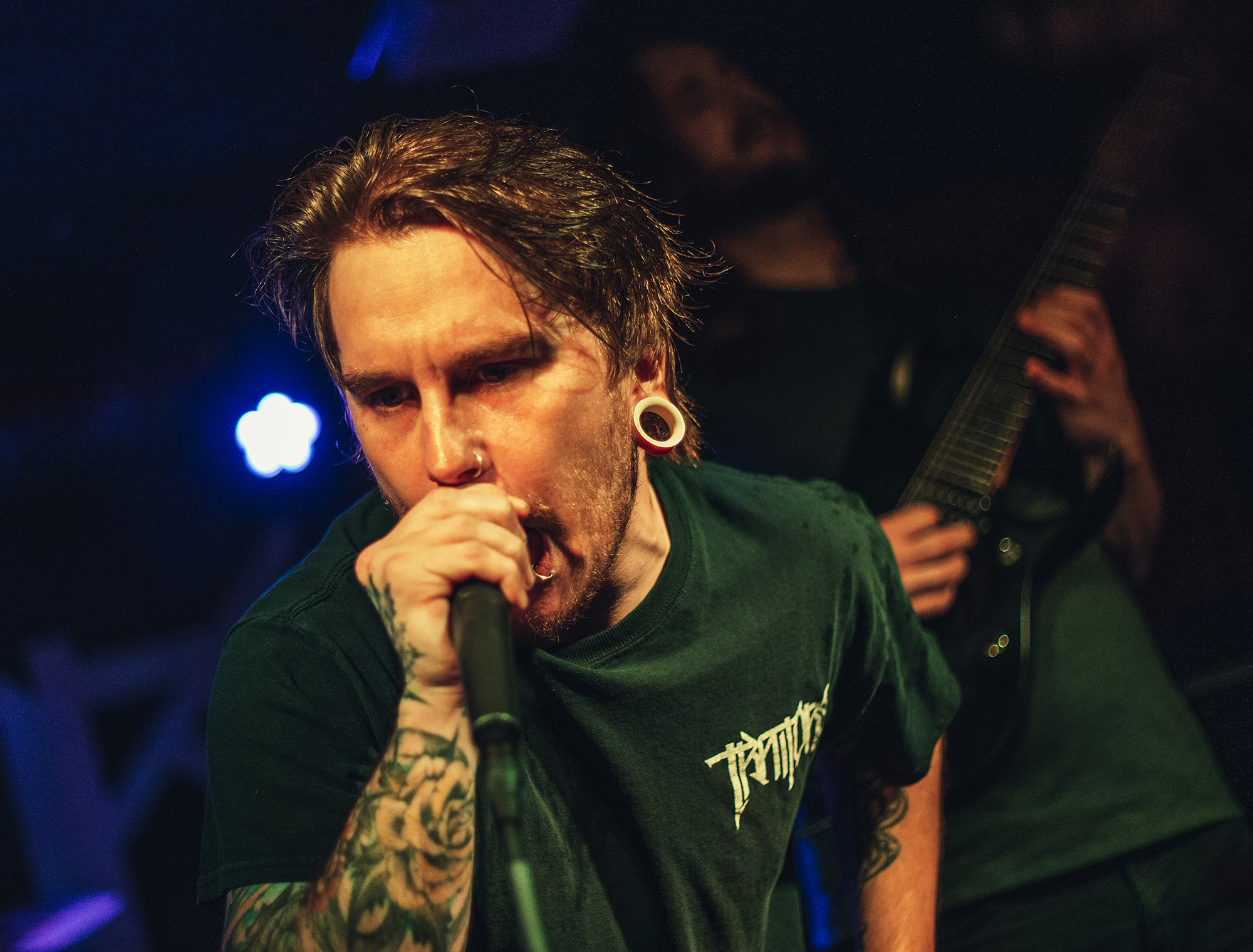 Because of Holy Diver’s small size, the bands loaded on and off by going directly through the crowd. In keeping with the theme of the night, the engineers playfully asked the crowd to make room by requesting they go to each side “like a big-ass wall of death, but without the death,” referring to the practice at larger metal shows of crowds running pell-mell into each other from opposite sides of the floor like they’re charging Helm’s Deep in The Two Towers. 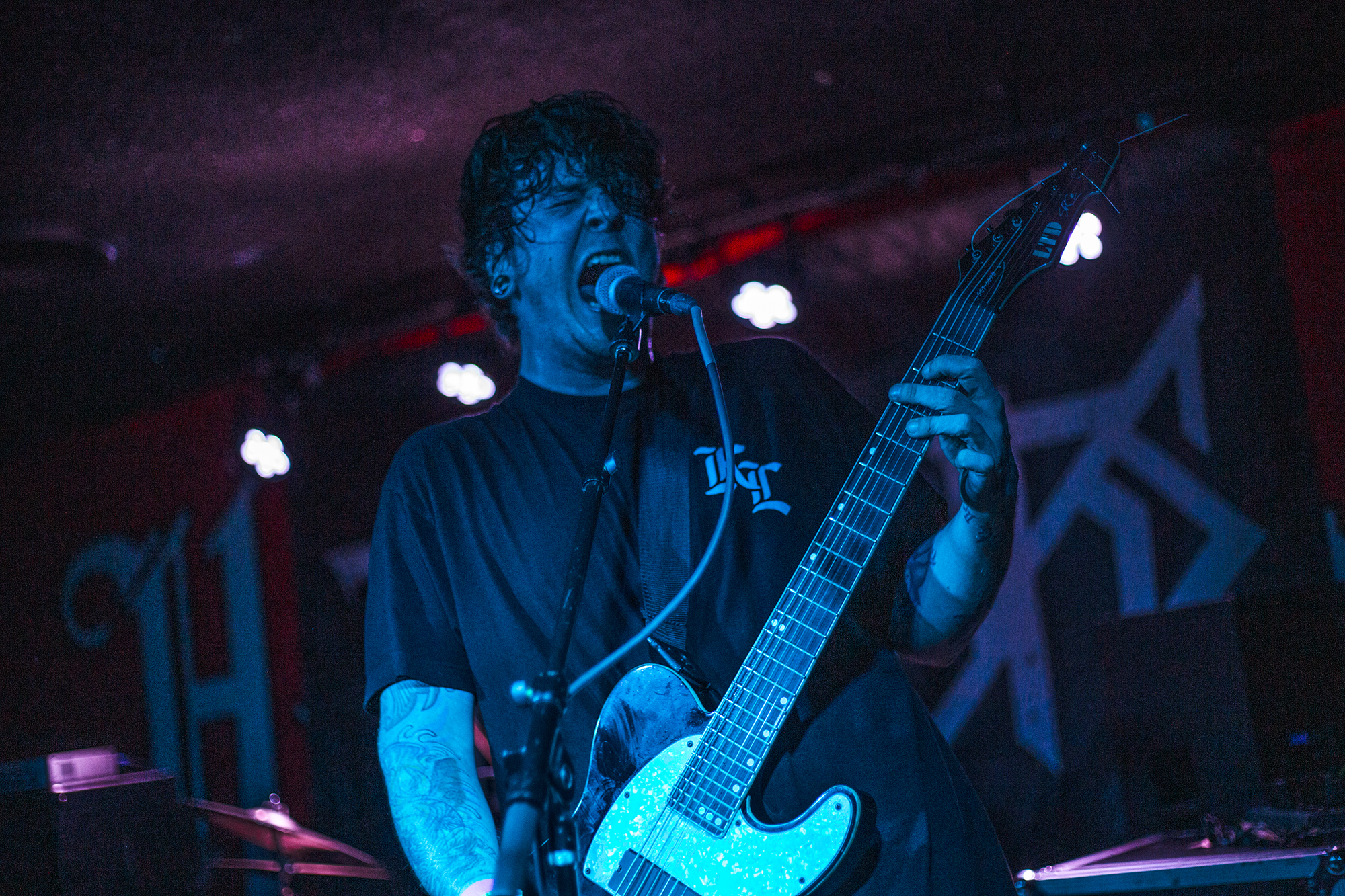 When touring act VCTMS took the stage, the already hyped-up crowd turned up the energy even higher. The Chicago quartet play a chaotic brand of metalcore that mixes low, chugging rhythms with a skronkier, sometimes nü-metal inspired sound that’s totally hectic and fun. The band’s performance matched the energy of their music, with even the drummer getting up out of her chair multiple times to accentuate the heaviest sections.

One brave pioneer attempted the first stage dive of the evening despite a rather thin front row. He didn’t make it very far, but his adventure inspired others to do the same, and the crowd took note and filled out the front.

Lights trained directly at the pit started to flip on sporadically throughout the rest of the night. Whether this was more for the CaliberTV cameraman at the show, or just for folks to mosh and crowd-kill in the spotlight, it was a wonderful way to reward an already enthusiastic and dedicated crowd by making them feel part of the show. 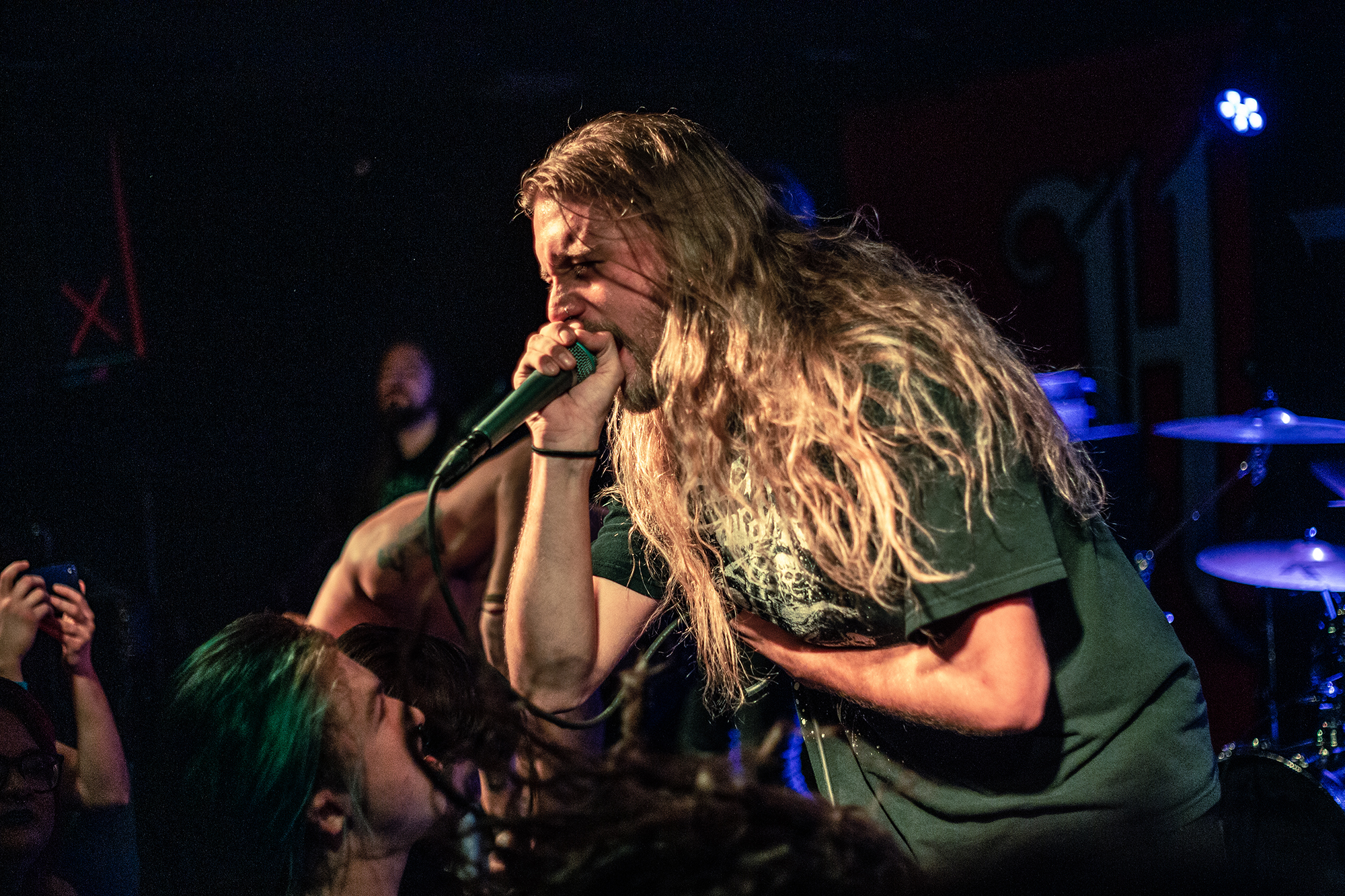 When Angelmaker began setting up, someone in the crowd declared gleefully, “I am ready to die!” Being unfamiliar with Angelmaker, I took this to mean I was in for some extremely heavy shit. My suspicions were confirmed when not one, but two vocalists took the stage.

Both frontmen exhibited great talent with bellowing lows, rasping highs and powerful mid-range screams, sometimes playing off each other in alternating patterns and sometimes combining for one deep, devastating roar. Angelmaker played a variant of deathcore that leaned more toward “death” than “core”—more technical but still heavy as hell—with a fullness of sound that was well captured by the engineers. 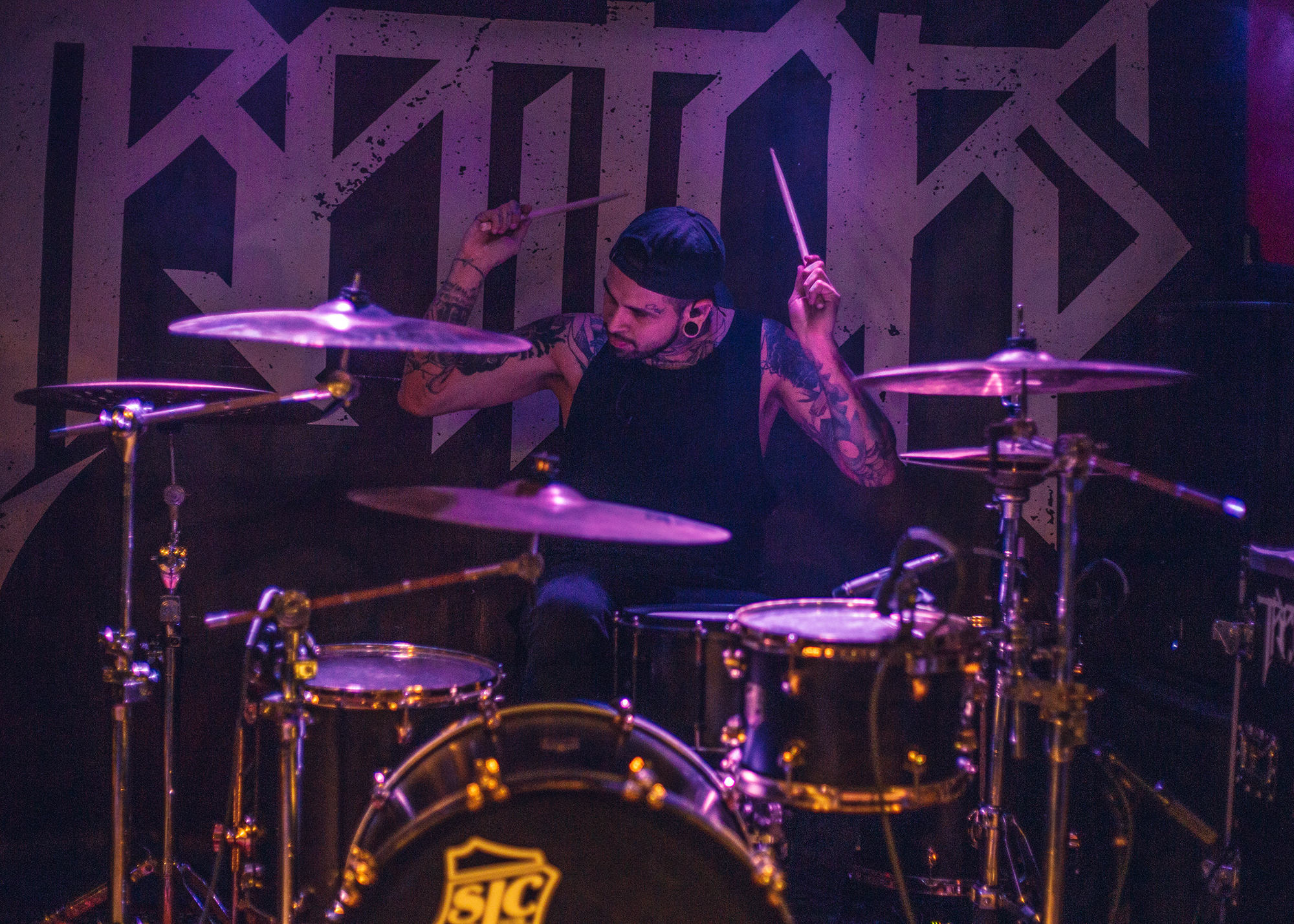 After five talented bands, the crowd was well primed for the main attraction of the night: Traitors. Clearly a favorite of both the crowd and the supporting bands, many of whom highlighted their excitement for Traitors during their own sets, Traitors set the crowd off right away with their dirty, groove-laden deathcore.

The floor became a roiling mess of hardcore dancing, two-stepping and crowd-surfing, with the imposing frame of vocalist Tyler Shelton commanding it all from the stage.

Shelton gave a strong vocal performance throughout the night, hitting not just his toilet-bowl lows, but also occasionally pulling out a tortured high-low bellow. Driving this steamroller of a set was drummer Stephen Arango, who was an absolute joy to watch play with great precision and energy.