Where the Wild Things Are: Trash Talk’s aggressive style bridges the gap between hardcore punk and hip-hop 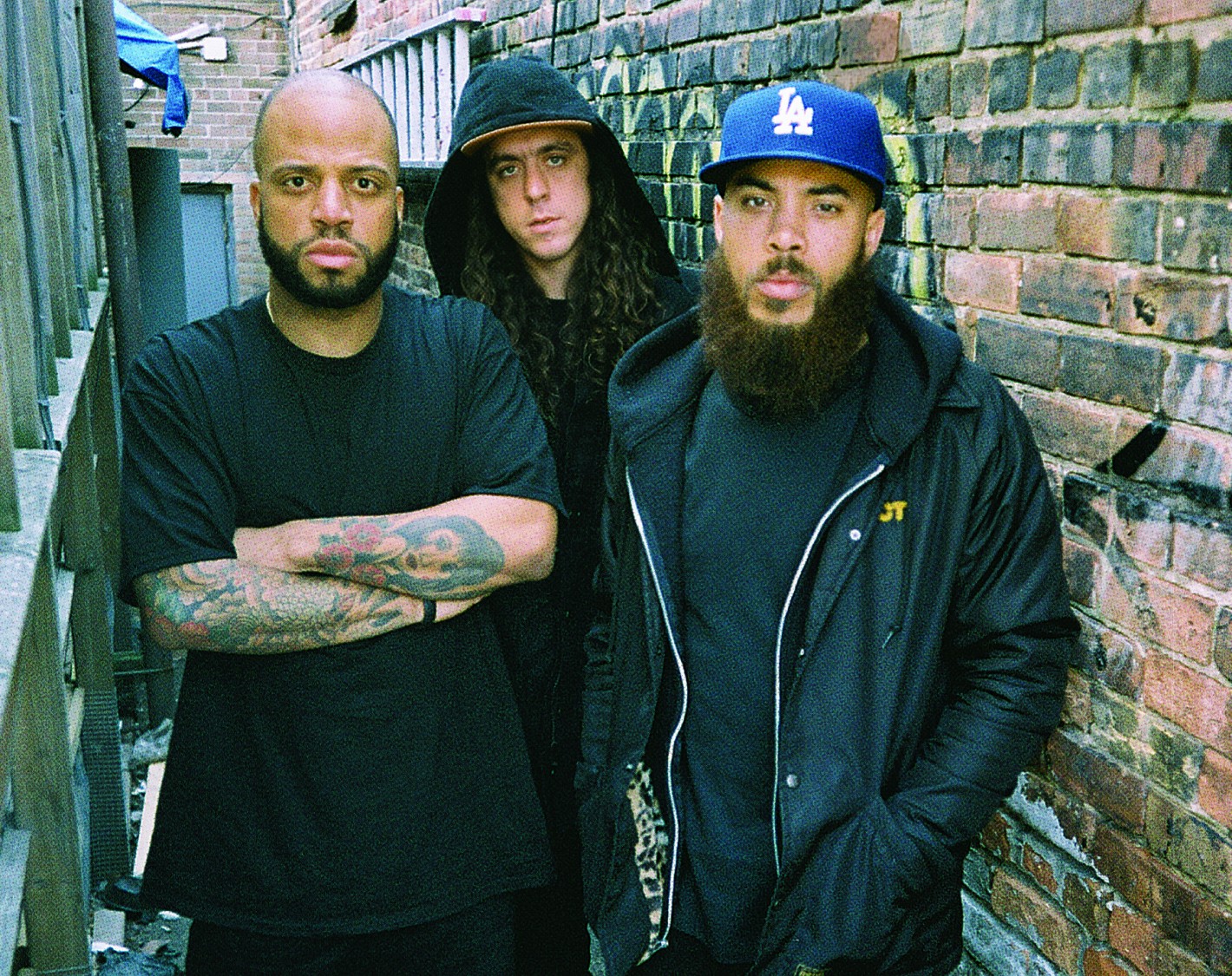 I love Lee Spielman’s tweets. Sometimes you can tell he’s been smoking weed: “Antwon just showed me a photo of @JLo and said ‘Look @MelissaJoanHart got ass.’” Other times, you can tell he’s high out of his goddamn mind: “You ever stop and admire how nice someone’s front yard is?” And, on occasion, his tweets are downright frightening: “Talking to the Sacramento newspaper later today about playing our first show there in about 7 years. Might Marshawn Lynch the interview.” Ah, Lord. Do you know what is worse than an awkward interview? Nothing. So for the next day I was truly scared about talking with Spielman, the singer whose band Trash Talk I consider one of my favorites.

Trash Talk has been playing hardcore music for the past 10 years and the band has seen a dizzying amount of success, especially for such an aggressive, not-pop-friendly band. They’ve played huge festivals, gotten to work with incredible producers—like Steve Albini (on the Trash Talk album) and Alchemist (on No Peace)—and they even signed to the Odd Future label, which still confuses hardcore and punk purists to this day.

The band, known for their chaotic live shows where the crowd tends to break limbs and destroy venues, is 100 percent chaotic energy. So, needless to say, the prospect of talking with Spielman was exciting, and I had a lot of questions for the Sacramento native. I wanted to know what he thinks about his old hometown and why he left; I wanted to ask him about his collaboration with Odd Future; I was dying to hear him discuss his band’s wild reputation and some of the trouble he’s gotten into with Trash Talk; and I was also wondering why his publicist said he was working construction.

So, I guess the question is: Did Lee Spielman Marshawn Lynch this interview? Well, that’s up to you to decide. 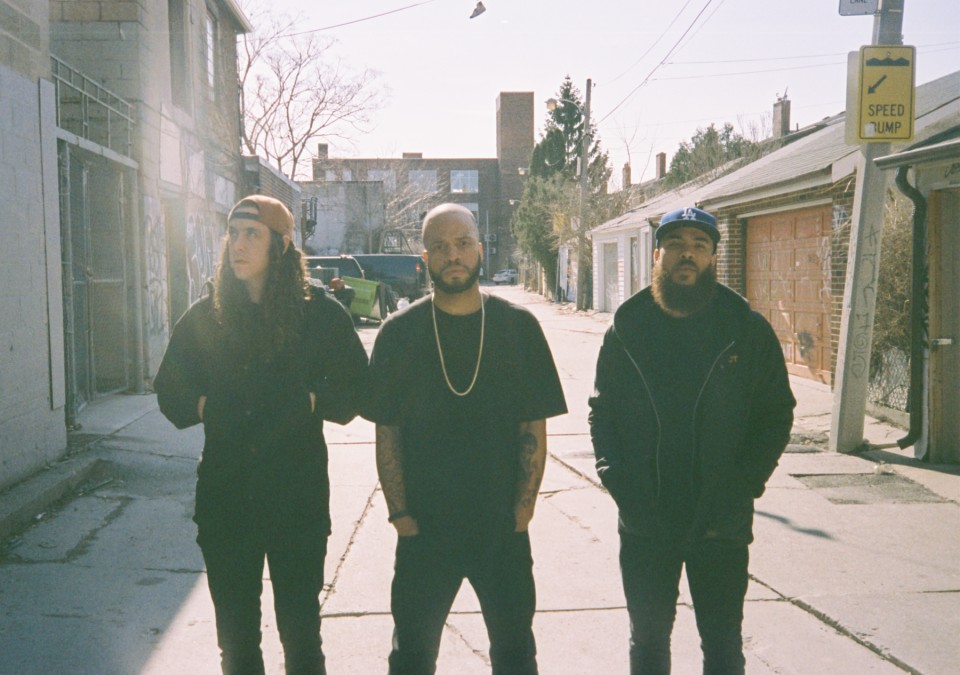 I was so stoked to see you still have a 916 number.
Yeah, I’ve had the same number since I’ve ever had a phone.

The publicist said you were doing construction.
No, I’m building something for us.

What are you building?
Just a bunch of shit for our tour. A bunch of crazy shit. I can’t really talk about it. You’ll see eventually.

Do you work on a lot of other stuff that’s not music?
Yeah, we’re working on a lot of shit. That’s why I’ve been building all fucking day. Working on a lot more stuff that’s outside the box. The last couple months we’ve been having a lot of fun doing creative stuff, from, like, art and ‘zines to collaborating with other artists and brands that we like and not keeping it so cookie cutter on our side.

Oh, OK. Man, I love No Peace. It’s so good.
I appreciate that, man. We were trying to do something different from the demos to what we have now. I don’t even know what the next stuff is going to sound like, but it’s just kind of boring to make the same music over and over. We all know by this point we know how to make short, fast, aggressive punk songs. It’s kind of fun to test ourselves, and we try to do that every time.

When you think back to the beginning of Trash Talk is it odd to think that your little hardcore band ended up being successful and you’re getting to tour and travel and things like that?
Yeah, it is weird. But, then again, it’s something I’ve always loved and have been involved in forever. So it’s weird, but I don’t know what else I would want to do. I’ve been involved with this stuff since I was a little kid, so it almost makes sense. And it’s kind of rad that it turned out the way it did. But I think [our success is] because ever since we started we’ve been 100-percent all the way.

What do you think you would be doing if you weren’t in Trash Talk?
I have no idea. I’d probably would have went to college and shit like that.

Is it weird that we still kind of claim you as a Sacramento band?
I did a lot of things there as a kid. We started playing there when I was a little kid. I booked shows there for the better part of high school years. It was almost like I could say that I learned how to be in a band and how to tour through booking shows in Sacramento.

Was that at Westcoast Worldwide?
Yeah. [Mike Hood] would leave for tour and me and my friend Jason T. would legitimately go to every single show there. We didn’t care what kind of band it was, whether it was a thrash band, a punk band, whatever. I don’t even think they knew my name until the first year. We went so many times and…we kind of took over for a little while. That taught me how to treat bands on tour—how to pay bands, how to book shows, how to promote shows. I kind of owe that whole area of us starting [to that period of time] because I booked all our first tours and it was like, “Hey, remember that time I booked you a show in Sacramento? Can you book me a show in New Jersey?” It was just kind of a tradeoff and punk and hardcore is cool for that. I met all my best friends like that.

Anthony Anzaldo from Ceremony was talking about Westcoast Worldwide and he remembers it being a huge pile of shit.
Yeah, it was a shithole. But it was our shithole, so it was OK.

Do you ever miss Sacramento?
Yeah, my family still lives there. Some of my best friends still live there. I’ve just been going so hard doing other shit. I don’t know, the day I turned 18 I got in our bass player’s car and drove straight to Seattle, and then I haven’t moved back home since then. But it’s been fun because I’ve lived in London, Seattle, Philadelphia, San Francisco, Richmond, Virginia. I feel like every kid should get out and see what’s up. Sacramento is a beautiful place and I’d be psyched to have a house there one day or some shit. I’m too young to be stuck there right now.

Do you think it was important for your band to get out of this place and just go?
I think we got to the point where it was like we were getting asked to play a lot of shows in Southern California and stuff and it was like, “Fuck it, let’s just go to Southern California. We drive there every weekend, anyway.” We all kind of moved apart. Our bass player was living in Bakersfield, our drummer in Los Angeles, our guitar player in Seattle, so one of the main reasons of me moving out was so we could all move to one place and operate as a unit. That helped us get a lot of shit done.

What has Odd Future helped you do?
There’s just other opportunities. It’s more like a whole new set of eyes and ears to work with on the creative side. And just kids in general. I don’t feel that punk and hardcore should be stuck to punk and hardcore kids. [Music should be] projected to someone that can make their own opinion to whether or not they like it, but a lot of time people don’t get the chance. Some kid at an Odd Future show may never have heard of anything like this, but the second he sees it he’ll know it’s his favorite shit. So I think it’s really important to do shit like that in general. Like, we’re coming through Sacramento with Ratking. We’re down to play with Wavves. Or a DJ. Or whatever. It doesn’t matter.

I never heard Ratking until I looked at your flyer and YouTube’d them. They’re really good.
That’s what it’s all about. Shit like that. And then vice-versa. There’s probably a kid in Sacramento who’s never heard of us and going to see Ratking and typed [Trash Talk] in and is like, “Damn, this is tight.”

Skateboarding has always had this connection between punk rock and hip-hop.
I’ve always said that forever. Like, Ratking, we’re going on tour with them. There may rap and stuff and we play a different genre or style of music, but at the same time we’re all the same kids. We got into music for a reason and we’re traveling with our friends, seeing the world, having fun—skating, tagging—doing whatever we want. At the end of the day, regardless of the genre, we’re kind of the same kids.

Since you guys are touring so much, do you ever just get tired out? Like you don’t even want to go on stage?
For sure. Sometimes I’m like, “This fucking sucks. I can’t do this.” But then maybe like 10 seconds before the first note it’s like, “Alright, this is OK.” Then five minutes into the set it’s like, “This is fucking sick.” Halfway through it’s like you forgot how you’re feeling. But this next tour is like 30 days. It’s definitely going to take its toll.

Have you ever played Harlow’s before?
No, I’ve never been there. Is it on J Street or some shit?

Do you guys get in a lot of trouble at your shows?
Yeah, a lot. It’s a blessing and a curse. It’s one of those things, people book us to play and they’re like, “Oh, I want this crazy show!” and they get it and they’re super bummed. The crowd’s not bummed. It’s usually the owners or some shit. But it’s not like we ever go out of our way to intentionally break anything. It’s usually not even us. It’s usually the crowd doing too much. We’ve been in trouble a shitload of times. We’ve had riots. We’ve had police shut down our shows. It’s kind of weird now. Every time we pull up, they know we’re pulling up and they have a list of rules of shit we can’t do before we walk in the building.

Is there one rule that people always have for you guys?
Don’t climb on shit.

Well, good, man. I’m glad you didn’t Marshawn Lynch me.
I thought about it.

Who knows what will happen when Trash Talk plays Harlow’s. That’s why you have to be there to find out. The show is March 16 and also features Ratking and Lee Bannon. Tickets for the all-ages show are $15 in advance and can be purchased at Harlows.com. 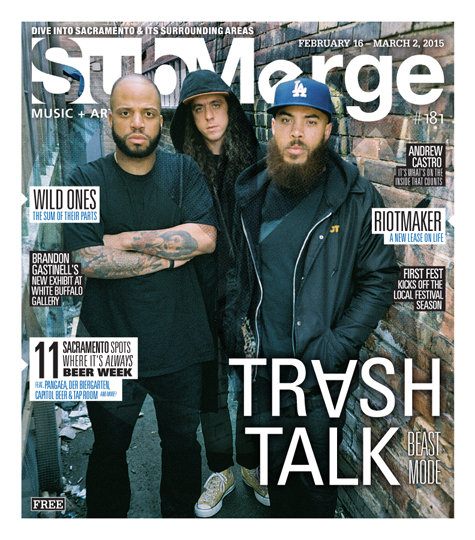