HEAR: An Aural Experience Unlike Any Other Awaits at the Annual Treasure Island Music Festival • Oct. 17-18, 2015 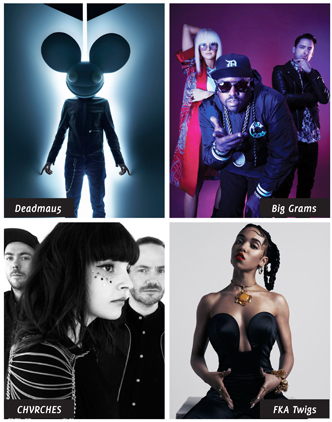 The fine folks at Noise Pop and Another Planet Entertainment have delivered yet another fine amalgam of national and regional talent that is sure to please the masses. For the uninitiated, the festival started in 2007 and has become quite a destination for fans of hip-hop, electronic, indie and nearly every subgenre in between. Thankfully, the myriad acts play back-to-back sets and separate stages are timed just right so everyone in attendance can enjoy and get their money’s worth. This year’s roster on Saturday is particularly impressive with the addition of Deadmau5, Big Grams (Big Boi + Phantogram), STS9, Run The Jewels and lesser known acts such as Gorgon City, Cashmere Cat, Shamir, Baio and more. Sunday’s lineup is equally insane now they’ve confirmed the likes of The National, CHVRCHES, The War on Drugs, Father John Misty, Deerhunter, Drive Like Jehu, EX HEX (featuring Mary Timony) and the always captivating Viet Cong from Canada. Do visit the site in advance to avoid a potential clusterfuck getting there since all parking is sold in advance and there are shuttles going all day to Treasure Island from the Bill Graham Civic Auditorium in San Francisco. Make it happen at Treasureislandfestival.com