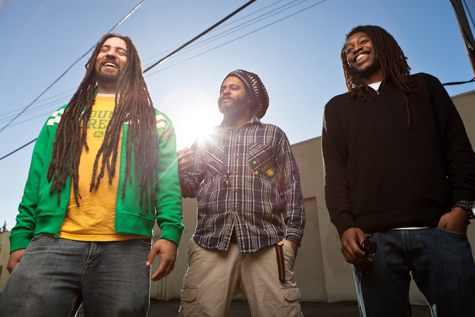 After many delays, Tribe of Levi release their first album, Follow My Lead

Tribe of Levi is a fixture in the Sacramento hip-hop scene as members of The People’s Revolution collective, but in the six years of being a crew the group never released a proper record. With the completion of Follow My Lead, the true schoolers are bringing local pride and world vision to the burgeoning scene.

The night before our interview, Chuuwee, Task1 and Poor of Tribe of Levi, among other local MCs, hit the KDVS airwaves for a session as part of the ATF: All Things Fresh’s last show of the semester. Tribe of Levi member, N.O.N. listened in while on the job saying, “It was a good display for the radio with good MCs.”

With N.O.N. on the job and Mic Jordan tending to “domestic things,” Poor represented for Tribe of Levi on the session. “While I was there, it hit me that this radio show was really special,” Poor said. “Not just because there were hella rappers there. But because this show was the only underground hip-hop you can hear on the radio. I’m not talking about Internet radio either. No diss to all the Internet radio cats out there, but I’m talking, in your car coming home on a late night radio. Feel me? On the FM dial! Plus, it is rare for me to be in a room with a lot of rappers that I consider really talented.”

The following morning, sitting down with Mic Jordan and N.O.N. of Tribe of Levi at the Javalounge, it was stated immediately, “Sacramento, per capita, has the best hip-hop scene in the country.” Without my provocation, Mic Jordan and N.O.N. came to the interview with a positive spin on the exhausting conversation of the local scene. Perhaps, it is time to stop worrying about what we don’t have and start appreciating the assets we do?

Like all talks with locals, it lapses into issuing complaints, issuing blame upon permits, shady promoters and community apathy. But as Tribe of Levi’s Follow My Lead record came together, the group saw past the common discrepancies to find inspiration and pride within the people who helped construct the album. As bleak as it can feel, an engineer working off the clock to perfect a mix, a local producer bouncing ideas and gathering resources and friends contributing guest verses and video treatments encouraged the group to see to it that Follow My Lead was released–even if they had to do it on their own.

The making of Follow My Lead began after a trip to Austin, Texas, for SxSW in 2011. The group returned home rejuvenated from the love it received in the southern oasis. An unfinished record entitled Levitation, was waiting for them at home, looming over their heads in limbo after issues arose with a producer who decided his beats were off the market, despite the songs already being laid down.

“We felt a little bogged down after spending five years trying to do Levitation,” Mic Jordan said. “It started to feel like an albatross.”

Mic Jordan opened the front apartment of his Midtown property to producer Lee Bannon. With Bannon a door knock away, the group began recording in his living room. The producer also linked up Tribe of Levi with New Jersey producer Akili Beats, who handled a majority of the production. “At first we were re-arranging beats,” Poor said. “Switching one out for the other, and so on. Until eventually, we decided to just write a whole other album. Lee Bannon played a huge role in helping the Tribe of Levi get a second wind.”

In August 2011, Tribe of Levi offered insight into the progress of Follow My Lead with a Jae Synth-directed video for “Things to Do” featuring fellow The People’s Revolution member Bru Lei. Shot at Mic Jordan’s home and around his 19th and G block, “Things to Do” opens with Poor riffing, “I’m on my Sacto shit today/I’m on my grown man shit too,” which is telling of the group’s mindset. Each rapper on the track sets up the closing stanza of his verse with, “I’m a grown ass man/I got things to do.”

On Follow My Lead, the group attacks each track with a no frills mentality that runs deeper than just on record. Mic Jordan had few qualms with stating that the record will be their push to take the group global, rather than fall victim to the small town thinking associated with the city. On “Things to Do” he raps, “Our community is crawling with future kings/But usually we stupidly ruin things.” 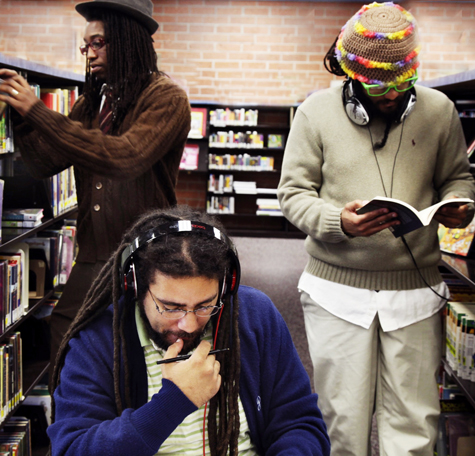 “Historically and even presently we deal with this conundrum of being on the verge of being a big city and the verge of being a small back water,” he said. “There’s this strange confluence of really motivated, driven people and then you get to a certain level and you get shut down by retrograde, backwards, close-minded people who are plugged into a good ol’ boys network trying to preserve a status quo that’s actually kind of weak. It’s just rough.”

Much like Mayor Kevin Johnson’s vision, Mic Jordan spoke of Sacramento as a “should be” destination city, citing the climate, the capitol and its beauty as attractions. The deterrent to a blossoming music scene, to him, comes down to overlapping enforcement agencies and regulations on live music that make it so little can be done.

“International visitors can’t even get into the 21-and-over venues with their passports,” he said, which lends restriction on putting Sacramento hip-hop on the global scale.

“The idea for this album was to be able to do something that had national appeal,” he said. “If we are able to make the jump to being national or international, I hope I can put some sort of bridge or infrastructure in for the rest of the artists.”

Historically, the artists from the capitol have not done much for the city that raised them, and it continues with bands like Trash Talk repping Los Angeles harder than here or Death Grips hiding out but only playing three shows locally. Listening to the Beastie Boys’ Hello Nasty record, a Mixmaster Mike phone call before “Three MCs and One DJ” features Mike saying he’s out here, but as N.O.N. notes, “It’s just a trip because you don’t see people like Mixmaster Mike out here doing events.”

“People don’t associate Sacramento’s biggest acts with Sacramento,” Mic Jordan added. “People don’t know that Blackalicious went to Kennedy. Other than [Brother] Lynch [Hung], he’s the only major act from here that was associated with it. But things are changing with Chuuwee, Death Grips and Bannon. Maybe the tide is turning finally. We’ve just got to figure out how to push it further.”

Follow My Lead is littered with hometown pride as the city’s name is invoked numerously throughout the record. It boils down to the people who helped make the album possible. Tribe of Levi is deeply rooted, recording tracks in Bannon’s kitchen and taking them to be mastered by PeteSpace at SoundCap Audio. “Everybody seemed to really believe in what we were doing and made it feel like they were participating in something worth while,” Mic Jordan said.

N.O.N. said he was recently searching Pandora Radio to see how many local MCs had stations, only to find artists like Mahtie Bush and Death Grips on the server. The initial push for Follow My Lead will begin on the grassroots level, as the group intends to handle its own public relations by writing letters and emails to the friends they’ve made internationally while traveling. The group will follow up the album with the delayed Levitation record, which is shaping up to be more of a mixtape, as well as solo projects from each member. N.O.N joked, “There’s a reason you have a mic in your house instead of a horse,” and it once again harkens to their grown men mindset.

“There’s not many people from Sac who are up on Pandora,” he said. “We’ve been keeping it real underground for the most part. We’ve performed so many songs that people can’t buy or listen to in their car. We’re putting our record on there.” 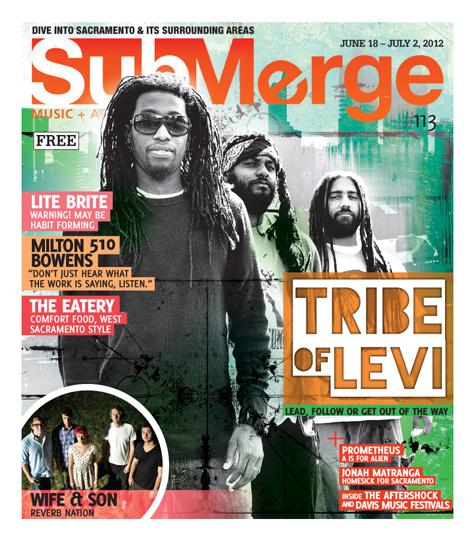 Tribe of Levi’s album release show for Follow My Lead will be Tuesday, July 10, 2012 at Harlow’s. Follow the band on Twitter (http://Twitter.com/tribeoflevi) for more updates and information. You can listen to some of the tracks from the album on the group’s Reverb Nation page (http://www.reverbnation.com/ and search “Tribe of Levi”).