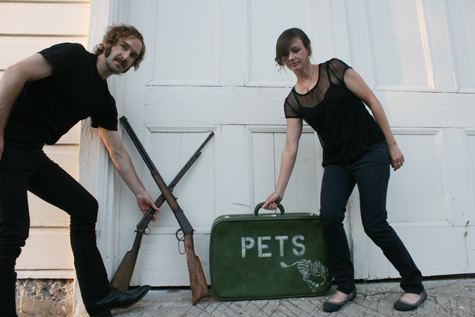 Photo by Dino the Girl

Pets Return to “Kill The Boredom” For Second Album

Most people watch TV and play video games in their living room, but Allison Jones and Derek Fieth of the rock band Pets use their house space a little differently. For the past few years, the rock couple has used their living room as an area to practice their music for upcoming gigs and recordings.

“Our living room is set up so one side is a couch and the other side is all of the amps and guitars set up against the wall,” said Fieth with a laugh. “So when it’s time to practice we have to drag it out, like we are setting up for a show. It’s not that big of a deal. It’s great to practice at home but it does make it a bit of an event.”

Although they would like to have a separate music room in their home to rehearse in, the only thing they seem to need is each other to begin the creative flow.

“He just doesn’t write a song and then I am like, ‘OK show me how to play it,’” explained Jones. “We write at the same time.”

But after much practicing, Pets are ready to unveil their second album, Ready the Rifles with 10 new tracks that will turn your mundane day into a rock out session. At first, they chose their album name because it simply sounded cool, but Jones and Fieth soon realized that the title had more meaning than they thought.

“The ‘rifles’ are whatever you use or we use to kill the boredom,” Fieth said. “So it’s like a call to action…your rifles kill the boredom. The last song is called ‘Bored to Kill’ and that’s what the whole thing is kind of about. If you’re bored, then make it better.”

The amount of footwork Pets put into their new CD could make them one of the hardest working bands in the area. The guitar players made sure that every part of their new album, from the artwork to the packaging, was under their control.

“It was cool to be so hands-on with the company making the CD though,” said Fieth after sipping his $1 Olympia beer. “It just shows that anybody can do it, if they get into it and go for it.”

Both band members agreed that if you mixed the music from The Raveonettes and Black Rebel Motorcycle Club it would equal their new rock sound for Pets’ upcoming album.

Ready the Rifles is fully equipped with live drums and has a “straight rock ‘n’ roll” feel to it, compared to their debut album Pick Up Your Feet, which prominently featured a synthesizer and a drum machine. These days, the duo decided to drop the old drum machine and only play with a live drummer for all of their shows.

“So that’s a big difference. It’s always going to be a live band from now on, which is fun,” said Fieth. “We love the drum machine, but we had pretty much had that machine run its course… But the energy playing with live drummers is awesome, especially with the new songs.”

Pets recorded Ready the Rifles with Ira Skinner at Alley Avenue Studios and hope to book him for future shows as their drummer.

“We would have had to buy a new [drum machine] and learn how to use it,” Fieth stated. “Or hire a regular full time drummer, but we love being just a two-person band. We don’t want to officially have a third member.”

One of their personal favorite tracks on the new album is “Sweetspot,” because it only took them about two afternoons to put together, unlike some of their other songs which took them months to produce.

Both members are Sacramento residents. Jones, from Citrus Heights, and Fieth, from Yuba City, feel like they have played at almost every local venue such as Old Ironsides, Marilyn’s, Press Club, The Distillery, Luigi’s, The Blue Lamp and even Sacramento State. But with the rapidly changing music scene in Sacramento, booking shows for their new music might be a different experience for Pets.

“When we had the drum machine it seemed like sometimes people didn’t know where to put us on a show,” said Fieth. “Now we’ve got this full, loud, rock ‘n’ roll set up. So we’re excited to see what happens.”

In 2010, Pets were pleasantly surprised to win the Sacramento Area Music Award (The Sammie) for “Outstanding Pop,” because they have been nominated multiple times but in different music categories.

It took Pets five years between their two albums, because they never feel the need to force the music out of their heads. They only play rock ‘n’ roll to have fun.

“If it gets hard, then we kind of put it off,” Fieth said.

“We go out instead,” continued Jones.

Even when choosing a band name in the summer of 2003, they decided to keep things short and sweet.

“We made a few simple rules,” said Fieth. “We wanted something that didn’t tell you what kind of music it was going to be. A lot of bands you can tell what you are going to hear just by reading the name. Pets was pretty unassuming.”

But when the fun-loving rockers aren’t on stage, they enjoy a good night out on the town in Sacramento’s downtown grid, mini vacations to San Francisco, and taking care of their pet cat named Townes. They even like refer to themselves as local “happy hour hounds.”

“We can tell you all the good happy hours,” said Jones. “We would have moved if Sacramento wasn’t so good… If there were no downtown, we wouldn’t be living in Sacramento. It’s comfortable, it’s nice.”

When the duo is on stage playing their loud rock set, it is easy to expect both members to be full of delicious pizza every time they perform. When it is show day, Pets have their pre-show ritual food at their weekly downtown eatery, Pete’s Pizza.

Whether its happy hour hunting or guitar practicing in their living room, Pets’ are ready to rock Sacramento and Ready the Rifles definitely won’t kill anyone from boredom, with their raw guitar sounds, synchronized vocals and live drumbeats. 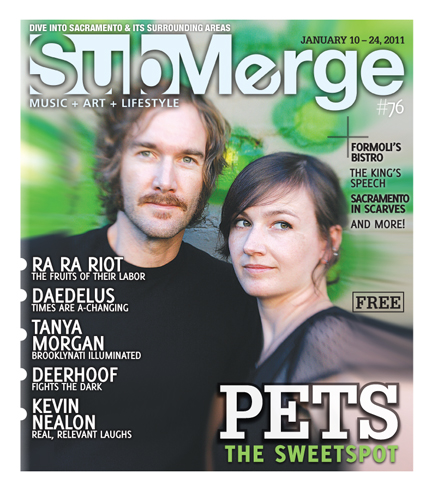 If you are 21+ and missed their all ages CD release show at Luigi’s Fungarden in Jan. you can see them this coming Friday Feb. 4 at the Townhouse. Show starts at 9 p.m. with DJ SAMiJAM, Shaun Slaughter, Adam J, Taylor Cho and Roger Carpio.