Two Local Bands to Celebrate Major Milestones at Press Club Within the Next Month!

Within the next month, The Press Club will host two separate major milestone shows for two prominent local bands. First up, on Sunday, Jan. 25, 2015, The Sacto Storytellers are playing their 15-Year Anniversary show! Joining them for the matinee gig (kicks off at 5 p.m., so get there early) will be The Flower Vato and Ky of the group Recorded Freedom. The Storytellers are a collective of incredibly talented local roots/reggae/ska musicians, and they are easily one of the most underrated bands in town. Seriously, check out their 2013 album V.A.S.O.S. at Soundcloud.com/sactostorytellers, or pick up a copy at a show. Undeniable grooves, super catchy melodies from the horn section, complementing male/female vocals, it’s no wonder the group has withstood the test of time, they’re just that good. You can also find them at Facebook.com/sacstorytellers. 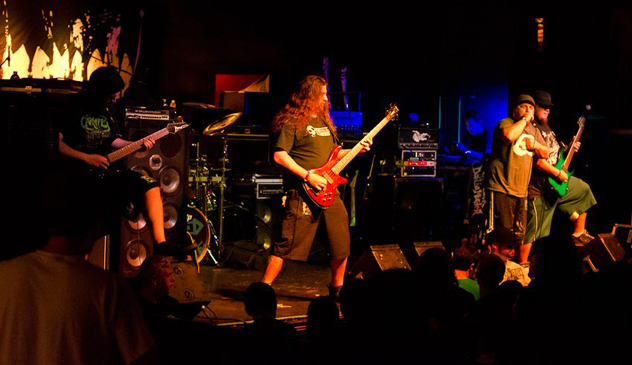 The second milestone show at Press will be for a band that couldn’t possibly be any more different from The Storytellers, but that’s part of what makes Sacto so great, its musical diversity. On Tuesday, Feb. 3, Awaiting the Apocalypse will play their 10-Year Anniversary show and joining them will be Catharsus from Visalia, California, and locals Removal of a Tenth. If you aren’t familiar, Awaiting the Apocalypse is a brutal death metal band that has been pulverizing California’s heavy music scene since 2004 with their intense rhythms and breakdowns, guttural growls and face-melting guitar riffs. Their 2011 album At War With the Dead is streamable on Spotify and is solid front to back. ATA should be (hopefully) releasing a new album this year. Find them at Facebook.com/awaitingtheapocalypse or Reverbnation.com/awaitingtheapocalypse.