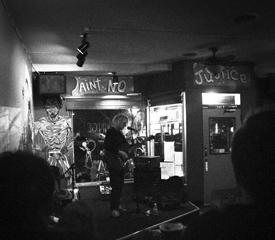 DCOI, a punk rock band based out of Davis, just finished hanging their black and white banner last Wednesday night at the Javalounge when an argument between members of the band and venue owner Toben Woodman took place, ending the evening of music immediately.

After Excreta from Vacaville, Calif., and Side Effects of Oakland performed at the Midtown coffee house, more than 30 attendees waited for DCOI to close out the night, but when words between the band and Woodman during stage setup escalated, the evening of punk rock music was sealed with missing equipment, damaged property and plenty of angry show-goers.

“I’m not going to point the finger at anybody, but there were only like five people left in here, so it’s a real short list,” said Woodman about the missing equipment and added a group of people threw chairs into a dumpster and broke the venue’s signs.

“The PA’s missing, dude,” was overheard within the crowd of people congregating on the sidewalk in front of the venue.

“That particular style of music is more aggressive punk rock,” Woodman said. “We, me, I, the Javalounge, allowed that to happen here because we were reaching out to them. I am not reaching out to them any longer. They will not play here until my stuff is returned and even then, it’s debatable.”

Submerge’s attempts to reach DCOI for comment were not answered as of press time.

Other items broken that night, according to Woodman, were smashed microphones and chords. 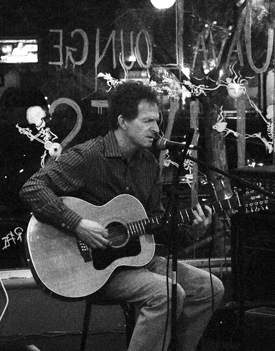 Despite a missing PA system, the show planned for the following night with Scott Miller and alternative rock singer/songwriter Anton Barbeau was still a go.

“I was going to go borrow the money if had to, to get another [PA system] because that’s what we do, the show goes on,” explained Woodman. “Fortunately the community reached back to us in positive ways and loaned us the equipment and a guy came forth tonight who had heard about what went on last night [and] offered to let us borrow one indefinitely if we need to.”

Thursday night’s show saw a wide demographic of attendees, from salt-and-peppered-haired adults wearing all black to children occupying the big orange sofa. The smell of coffee paired with reverb from the single microphone on stage dismissed the previous night’s incidents as Miller opened the show without introduction, taking requests from the crowd like, “Idiot Son” from the album Plants and Rocks and Things when Miller was in the San Francisco-based band the Loud Family. Not a seat was empty in the coffee shop during his entire performance, which included live excerpts from his book Music: What happened?, a cover of the Beatles’ “I Want to Hold Your Hand” and a duet with headliner Barbeau.

Barbeau, a longtime Sacramento musician, is known for his albums The Horse’s Tongue and Waterbugs and Beetles released in the early ‘90s, but the man has a never-ending musical resume that includes writing and producing the album Bag of Kittens with singer/songwriter Allyson Seconds.

Punk rock, indie or maybe it’s a noise rock booked night at your venue of choice–still the Sacramento music scene is both unpredictable and entertaining. One evening hardcore and punk rock reign supreme within the coffee shops and pizzerias that double as venues, but 24 hours later, the alternative singer/songwriters of the ‘80s are witnessed reviving the classics. Although few all-ages locations exist, it’s apparent from last week’s hiccup that venues will still find a way to put on a show.