As a major portion of the greater Sacramento-area music fabric, Two Sheds made a splash with the husband-and-wife duo of Caitlin and Johnny Gutenberger (formerly of Far) crossing streams to generate a truly endearing kind of folky pop. The genesis of that obvious chemistry materialized on the band’s impressive debut LP, Strange Ammunition, released in 2006. Following a subsequent EP release and a period of relative stagnancy, the Gutenbergers packed it up and moved to Los Angeles, Caitlin unsure if her next step was grad school or working further toward her artistic goals with the band.

Lethargy ensued even while new muses were slowly unfurling their bemused little tentacles out toward Caitlin as the viscera of her new surroundings began to take hold. And as it is with all artists, something struck. It wasn’t without assistance, though. Chameleonic Portland musician Nick Jaina, a friend of Caitlin’s, issued a challenge to attempt to write 20 songs in one day. After two attempts at reaching this lofty goal, Caitlin had penned somewhere in the neighborhood of 20 songs for Two Sheds, a feat that far surpassed the piecemeal writing-recording regimen she and Johnny had undertaken in the previous three years.

The result is Assembling, an adventurous collection of stream-of-consciousness arrangements, lyrics and recording techniques. It’s also a dream-like jaunt through hazy poppy fields at the precipice of where slumber and fluid improvisation collide. It’s also just an incredibly good album that hubris would do well to side-step.

Caitlin took some time out to wax with Submerge about the new album, how she’s tired of acting like George Lucas all the time, and the immaculate conceptions of song-babies from the thunderbolts of the ether. It’ll make sense later… Read on!

Tell me about how these songs came together. I understand there were dares involved.
Yeah, basically before I wrote the record, I wasn’t really writing much. We’ve always recorded things really piecemeal. It’s been more of a long and drawn-out process, which can produce great results, but I just wasn’t being terribly productive in the songwriting department. So my really good friend from Portland, Nick Jaina, he’d been doing this exercise that he’d been trying to get me to do for a while. It was this songwriting challenge where you try and write 20 songs in a day. Which is ridiculous on its face, but I think the point of it is that you don’t have any time to get precious about what you’re doing or to think about whether or not something is good or bad. It’s just to get through it, which was a really good experience for me. I just did it to see if I could do it. The first time I did it, I wrote 11 or 12 songs, and I was like “Holy shit!” The whole day it was kind of painful and arduous, but at the end of the day I looked back to what I did, and there was some cool stuff in there. So I did it again a month or so later, and I wrote six songs in a day. So I had almost 20 songs, and then around that time we had some friends who own a studio down here [in L.A.] called New Monkey and they had four free days, and said, “Why don’t you come down and see how much stuff you can get done in four days?” We recorded 14 of those almost 20 songs in four days. That was literally the record. I think it’s one of those things that was just good to do. It’s just sometimes good to do things that are seemingly hard or silly to see if you can do it, and I think the cool thing that came out of it was me realizing that if I just go and sit in a room long enough and muscle past the judgment or the gag reflex of initial songwriting ideas, something is going to happen. It was a great experiment for that reason.

As you were going through it, and then the month or so in between those sessions, what strengths or weaknesses did you find you were facing by approaching it that way?
Well the weaknesses are that you don’t really allow yourself the time to fine-tune things. It’s really just about allowing the feelings or the thoughts that you’re having in the moment to come out and sometimes while it’s happening, none of it seems to make any literal sense or you don’t even know what you’re writing about. Then you go back and revisit it when you’re away from that intense day, and you’re like, “Oh my gosh! That song is totally about that one argument I had with my friend!” It’s weird; I had time to think about it in a more analytical way after it was done.
I think the strengths of it for me were just having the realization that if I go in and I work on something and I just allow myself to continue working through something even if I feel like it’s not working out, something can come out of it. Before, I always thought of songwriting as that beam of light that comes down when the clouds part and flashes you in the middle of your forehead and you’re like, “Yes! This is my song-baby that just came to me!” I realized that, actually, having something happen is just something that happens in the middle of you trying to do something. You don’t have to wait for it. It’s great when it is the beam of light, but you can actually also make great stuff if you just kind of look at it more like getting a job done.
I tend to find the more you go back and try to fix something, the less satisfied you are with it. You’re trying to recapture the moment you had when you came up with that idea and it’s not the same. I feel like I tend to George Lucas-ize things more than I tend to Leonard Cohen them, ya know? “Oh what we need in this part of the song is more pod races and more conversations about trade federations!” Then you look back at it later, and you’re like “What the hell was wrong with the demo, man?”

It seemed to me on a song like “You Get to Me” that you weren’t shy about trying different rhythms, and later on the recording, different noises and textures. Can you speak to that experimentation as it relates to the musicians who recorded on the album outside of yourself?
Yeah, well with a song like “You Get to Me,” I wrote this song and it was just this little picky guitar part, which is still on the recording. In general, I’ve always felt like everyone in my band has a really distinct kind of musical perspective. One of my favorite things is writing a song and giving it to my band and seeing how everyone responds to it. We just drew up the demo in the studio, and Johnny was like, “Oh my gosh, it would be funny and awesome to put this Casio beat under it.” We did it and started using it as a click track, but then we definitely started to get attached to it. Our friend was playing piano and we ran it through a Space Echo, because wouldn’t that be fun? It was so stream of consciousness and so not intentional. It was like literally us looking at things in the studio going, “Huh, that’d be fun to use.” It was whoever had the coolest idea at the time while we were just flowing with stuff just tried it. It all just came together. It was really, really fun for that reason.

See Two Sheds live as part of the Davis Music Festival on June 20, 2015, at Odd Fellows (415 2nd Street, Davis). Weekend passes are available for the three-day music fest (now in its fifth year) for just $25. To purchase tickets, go to Davismusicfest.com, where you can also find full line-up information. 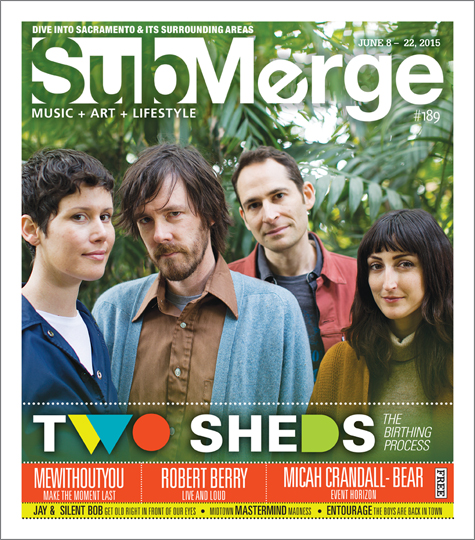