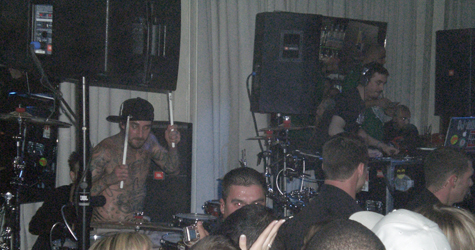 Thursday night at The Park Ultra Lounge saw not one but two rare appearances. The first was the electrifying, genre-amalgamating duo that is comprised of Travis Barker from the late and arguably great Blink 182 on drums and celebrity heartthrob DJ AM a.k.a. Adam Goldstein on the wheels of steel. The second and quite possibly rarest was my own appearance. I don’t quite fit in at a place like The Park, and if it hadn’t been for one of my favorite drummers playing that night, I would have avoided it at all costs. Let’s just say I’ve got a skinny wallet, not a skinny girlfriend. But that’s a different article.

I arrived early and decided that, when in Rome, I would order a Vodka Red Bull as I was going be standing around for a while. Travis and AM didn’t go on until after midnight and I’d need wings. The performance room resembles a grown-up version of a high school dance minus the actual growing up. Beverages at the back, coat check around the side with a medium-size stage against the back wall. Long, ruffled white curtains drape down the walls, which serve as the perfect canvas for the blues, purples and greens that pulse and ripple—mimicking the dance floor.

Eddy Edul was the opening DJ and he was spinning a pretty standard mix of dance tracks, remixes and mash-ups. He’s pretty uneventful, but I give credit where credit is due; He does get all those little Parksters dancing.

TRV$/DJAM, as they are referred to, went on a little past midnight. My coveted position to the left of the stage was in plain sight of Travis’s drum set that had a monogrammed bass drum head. Minutes before the show was to begin, I was quickly overpowered by a flock of perfumed Paris Hiltons who caused my forced migration to the back of the crowd. Sigh, so much for some decent pictures.

All the frustrations aside, Travis and AM are all that they are cracked up to be. AM seamlessly mixed a variety of music that ranges from Metallica to Foo Fighters to Paul Wall, who actually made a special guest performance that sent the crowd into hysterics: iPhones were out in full effect when he stepped onto the stage. They shot into the air like ostrich necks, poking out over the crowd for a picture of the always iced-out rapper. Travis played to the music, but not in a way that seemed like he was doing a cover or simply just playing on top. He unleashed thunderous drum rolls that spanned his whole kit and ended with explosive crash hits. He remixed the songs by adding 16th note high-hats that weren’t originally there, or by expanding a section and filling a dead space with a snare drum roll. The pace was nonstop as AM continued to throw song after song at Travis, who devoured each track one after the other.

I was surprised at how animated AM was during the show. I saw him dancing and waving his hands to the beat as well lip synching his favorite vocal lines to the crowd who sang right back. He was wearing one of those clever shirts that we all love that said “Whitey,” written in the Walt Disney font. Travis was his usual shirtless self, with a black sideways baseball cap that had some sort of cursive white font—the same font I saw on the hats and shirts of the rest of his entourage (Stars and Straps, surely) who were red-roped on the side of the stage.

Unfortunately, the crowd was more star-struck than enthusiastic. I didn’t see much dancing. The show was more of a really loud photo opportunity than anything else. They finished about an hour later to the eruption of applause from the crowd, sans encore. I left feeling alright about the evening despite all the non-musical sour notes.