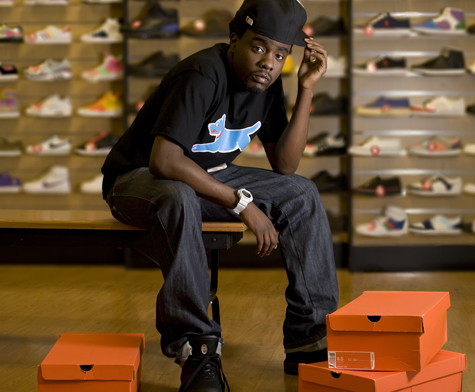 At a time when my patience and interest in the current generation of MCs was fading quickly, Wale stepped up to the plate. Without a gimmick or marketing scheme, the Washington, D.C. native always came correct. His persona was genuine, self-assured and humble, with clever wordplay and unlikely references of encyclopedic levels. Relying heavily on the regional D.C., percussion-heavy “go-go” sound, he displayed a sharp ear for beats and built a rep with a string of successful mixtapes released straight to the Internet (most notably 100 Miles and Running, which is available for free download). He made all the right moves, and after years of grinding it out, he inked a deal with Interscope in March 2008.

His ascension from the underground to mainstream has brought another wave of work. Staying busy, Wale and his 10-piece band, U.C.B., are headed out to the West Coast for a mini-tour alongside the only other rapper to hold my interest so far in ’09, Blu. A Sacramento stop was set, but the local promoter dropped the ball (good job!), so instead you and I will have to travel out to the Mezzanine in San Francisco on Jan. 31 for the show. This is exactly what Kevin Johnson doesn’t want to hear”¦

The last time we talked, you were just about to sign your deal. How has your life changed since inking that contract?
Record deals just mean more people looking at you. I played sports my whole life so I’m kind of used to that already. I don’t really notice anything, though. Maybe I’m too close to the whole thing to notice. People around me might notice the changes, some for the better some for the worse, but I don’t feel any different.

So there isn’t a feeling that the game has changed a little or that the stakes are higher?
Um, when you get stuff like the XXL shit, that’s when you start to see some of the little things. I try not to think about it, you know. I deny my success as a mnemonic device to keep me level. Also, so I don’t fall knee-deep into or acknowledge the pressure.

How far into the album are you? Does it have a title yet?
I’m not at liberty to tell the title. We’ll be revealing that soon, but the album is about 95 percent done. I got John Mayer on there, Mark Ronson did a couple records, Cool and Dre did a lot of work on there. I’ve got Marsha Ambrosius from Floetry, and Lady GaGa. I’m trying to do a lot of things. I wanted a whole body of work, and by body of work I mean sonically it all sounds like one piece of work. Sometimes you just get what you are given, but basically I just make dope record after dope record.

Do you find yourself taking more time on the writing now, as opposed to on a mixtape?
If I truly feel a record, I write to it immediately. You have to do certain records and those take a little longer to write. I got a record called “Family Affair” that might seem like it took a long time, but I wrote it in 30 minutes. It’s a three-sided story, stuff from my experiences and things that I’ve seen, about a pimp, a prostitute and a child all giving their opinion on their life. It’s called “Family Affair” because the pimp is dad, the prostitute is mom and the child is their kid. It’s how each of their lives reflect off each other. It’s probably my favorite record on the album.

With your mixtapes, and like a mixtape should, you cover a lot of range. Is the album going to be the same way or is there something you’re aiming for thematically?
The mixtapes are a body of work, because you are the sole creator of it, and you manipulate everything you want. With an album, there is a lot more that goes into play. It ain’t…you got to read between the lines on that one. You got to do it a different kind of way. It’s a great album, but there are more cooks in the kitchen.

What’s the funniest thing a record exec has said about your music so far?
I don’t think a lot of people understand the go-go sound, unless Rich Harrison is doing it. I’m 24 and he’s 30-something, so his go-go is more of a swinging go-go, and mine is more of a bounce.

So, no awkward comments from suits, then?
Oh yeah, oh yeah. Put it like this, I’ve been in situations where I sat with Jay-Z, Puffy, execs from Motown and all that and they all loved me for the go-go sound, but now it’s like people are skeptical of doing it. The only go-go they know is like the Lil Mama song with T-Pain, which wasn’t a good interpretation of what our sound is like. No offense at all, but it’s not the correct interpretation.

Is that going to be how they market you—as a “go-go” artist?
No, not at all. It’s a sound. I’m using a lot of sounds and experimenting with a lot of stuff. If you’ve followed me, you know I use a lot of go-go, but on the album I want to show the different stuff I can do. Early in your career, you want to show diversity, and I don’t want to look like a one-trick pony. I’m a unicorn in a stable of one-trick ponies.

You mentioned the XXL cover earlier, on which you are dubbed one of 10 leaders in the freshman class of ’09. As a leader of this new generation of rap, what do you see your role as? Is there anything you feel you need to change or maintain?
Maintaining integrity and just being truthful. There is a lot of lying going on in music, in all genres. Everything I feel like that needs to be changed, I will speak about on the album, without saying it exactly.