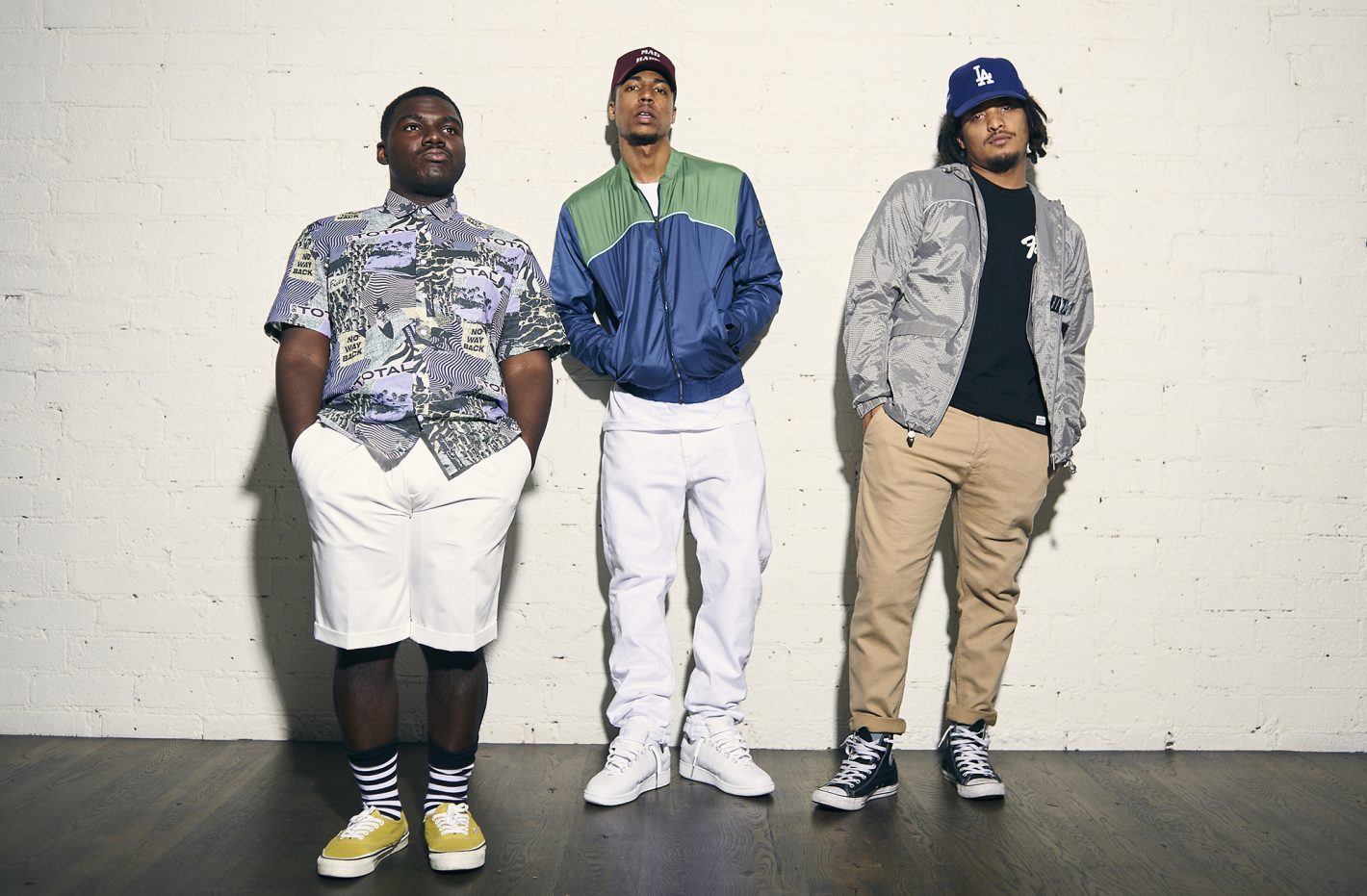 Photo by Will Azcona

Any avid music fan knows Los Angeles as a city of hip-hop legends: Snoop Dogg hailing from Long Beach, Dr. Dre and Eazy-E representing Compton and countless more that have contributed to the genre in their own way. Thanks to artists like them, the early ‘90s were a golden age for hip-hop and Los Angeles culture.

However, something has always been missing. Those artists coming out of L.A. didn’t come from the county’s west side. Hip-hop has never been a huge part of West L.A.’s musical history until recently, and the three rappers that make up Santa Monica’s Warm Brew will serve as the region’s ambassadors if they have their way.

“I didn’t even know what the fuck Santa Monica was,” Warm Brew member Manu Li said about moving to Santa Monica with his family when he was younger. “I hadn’t been this far toward the beach before. I didn’t know this area. I wasn’t feeling it.”

Then Manu Li made friends with Ray Wright in middle school and the two began making songs together. They weren’t a group yet, but two kids who were growing up together and looking for something to do near the beach. The two eventually met future collaborator Serk Spliff in high school, but Warm Brew didn’t truly start until Wright quit playing football for San Diego State.

It didn’t take long for Warm Brew to start getting notoriety in the area. The trio’s 2013 release, The Ride, garnered a lot of attention, including from L.A. MC Dom Kennedy. An invite to Kennedy’s studio resulted in the group becoming a part of Kennedy’s label OpM and lead to the recording of, their breakout album, Ghetto Beach Boyz.

What Warm Brew is doing is a part of something larger. The three friends are making music that is quintessentially L.A., a city that has been making somewhat of a comeback in recent years with the likes of G Perico and LNDN DRGS. They make G-funk for the modern era: relaxed, bass-heavy and hypnotic hip-hop that is indebted to the artists from the early ‘90s more than the funk of the ‘70s. Well, at least that’s some of the music they make.

“We don’t want to pigeonhole ourselves and say that’s the music we make,” Serk Spliff said. “That’s the beauty of coming from all these different places. We’re multiracial and we span different parts of the world, culturally, so we hear things a certain way. We grew up in Southern California and G-funk is just a part of the era that we came up in, so we really, really respect it and love it. I think that’s evident in our music, but I think it’s evident that we like other kinds of music as well.”

These days, staying in one subgenre just doesn’t really cut it for artists. Branching out and experimenting are required to keep fans wanting more. Warm Brew is more than willing and did that recently with their track “Let’s Get Paid,” which was made with Sacramento’s EDM duo Hippie Sabotage.

“It’s always easier to have a conversation and get to know the person,” Manu Li said. “It wasn’t hard to write that song or anything. We’d be hard-pressed to work with someone that we just don’t like. With Hippie Sabotage, it was very natural. You know, we got a little hippie in us, too.”

No matter who the group works with or however far touring may take them, they’ll always be proud to be those rappers from Santa Monica. The city is their home and they have witnessed it change into what it is today, very different from when they all met in school. That change doesn’t scare them because they know that, at its roots, Santa Monica is a strong community.

“Change is a very needed part of growth,” Serk Spliff said. “It’s Los Angeles, and we’re right by the beach so we’d be crazy to think that it wasn’t going to start to get tapped into. What I don’t like is the forcing out, and it’s trying to eradicate of the culture. That’s something that we do take pride in and we want to carry [the culture] on. Anybody can come in here and enjoy the city. We want people to love it here. Wherever you’re from, we want you to feel loved. Just don’t try to get rid of the culture that’s taken a long time to create.”

If Warm Brew is taking a stance, it’s always people over profit for them.

Rappers have always been linked with some sort of community. It’s almost a tradition for a rapper to make sure an audience knows exactly where they’re from and where their loyalties lie. Warm Brew puts on for the people of Santa Monica.

“No matter where you grew up, you should be proud of where you’re from, if you’re proud of the person that you are,” Manu Li said. “To be a rapper here is such a cool thing because this is such a cool place and there’s a lot of history. Sometimes you go out and you feel like a hero.”

Bringing hip-hop from West L.A. to the rest of the world the way that Warm Brew is doing is not only something big for the community, it’s something that hasn’t been done before, according to Serk Spliff.

“It does feel like something that is long overdue,” he said. “There’s going to be people like us after, and there were people like us before, but the fact that the three of us came together so that we can be the heroes is cool. It’s interesting because we do feel that love from the people. They understand that we’re doing something different. We’re doing it our way, but we’re doing it for them.”

Manu Li says that the pride coming from the city is what drives them to keep creating and to keep putting in the work they do. It’s paid off for the group so far, seeing as how they recently signed with Red Bull Records—the label’s first foray into the rap world—and landed coveted festival bookings with Riot Fest in Chicago and Sacramento’s HOFDAY.

The often-heard advice about success is to stay grounded and just work on your craft, but there’s nothing wrong with a little pride now and again. It takes a tremendous amount of work and creativity to make music at all, let alone to be as prolific as Warm Brew has been these past several years. It’s been making an impact for the people in the community that the trio calls home. Warm Brew wants to be the group that people from Santa Monica and West L.A. point to and say “those guys are from right here and we’re proud of that.” Luckily for them, it’s already starting to happen.

“I’m trying my hardest not to sound arrogant, but if you ask me I would say I feel like a trailblazer,” Manu Li said. “Like a living legend.”

Get down with Warm Brew and more than 30 other performers at this year’s HOFDAY Party on Sept. 16 at 915 Front St. in Old Sacramento. The event will also feature acts such as Hippie Sabotage, Noodles, DJ Amen and Kool John, Hobo Johnson and the Lovemakers, Joyzu and so many more. For tickets, go to Hofdayparty.com.