These days, mention the name Weezer and you’re bound to hear essentially two types of responses. 1) That they stopped listening to the band after their then-comeback self-titled third album, colloquially known as The Green Album, thereby avoiding the debatably unlistenable albums that followed; or 2) That Weezer is the greatest rock band on Earth, regardless or perhaps because their openness toward experimentation. There is very little even ground.

The rub is that after Rivers Cuomo, Pat Wilson, Brian Bell and Matt Sharp formed in 1992 in Los Angeles, there likely was no real plan other than to set Cuomo’s pitch-perfect slacker vocals to heavy rock guitars, like a sort of Beach Boys on steroids or a surf-bleached Kiss. Throughout their career, each of Weezer’s albums has come from inherently disparate headspace (metal, alt-rock, even hip-hop), despite being relatively conservative with its sonic loyalties. But backlashes happen, and for a world that wanted Weezer to reign as their nerd-rock kings forever, disappointment was inevitable. No one could have anticipated the band’s penchant for experimentalism after The Blue Album and Pinkerton set the table for modern emo.

The band’s upcoming album, Everything Will Be Alright in the End, is being touted as a return to “that” sound for Weezer. That band who stormed out of the gates on the backs of “The Sweater Song,” “Say It Ain’t So” and “Buddy Holly.” That sound that set them apart from most every band performing in the mid-‘90s.

And the thing is, they nailed it.

Of course, this is a matured, weathered Weezer now, so the exact magic of their former incarnation has merely transmogrified. But the songs are there.

Manned by Ric Ocasek—who famously engineered and produced the band’s most well-received, early albums in The Green Album and The Blue Album—Weezer went “back to the shack,” as Everything…’s single relates, to recreate some of the wizardry of their formative years.

Back in fighting shape after a hiatus of four years, longtime Weezer bassist Scott Shriner is understandably excited about the new album. In advance of the band’s appearance at Aftershock in Sacramento, Shriner took some time to wax with Submerge about Everything Will Be Alright in the End, set for release Sept. 30, 2014. 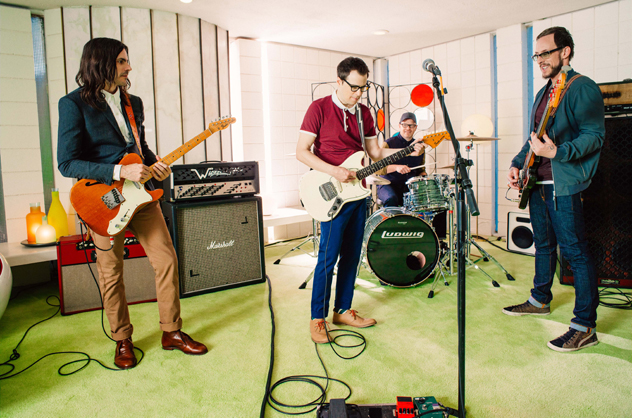 Everything Will Be Alright in the End is being touted as a return to “that” sound for Weezer. What to you is “that” sound, and how was it to return to some of those elements that the band became defined by?
As you know, we’re working with Ric Ocasek, who’s an absolute legend, a beautiful man and human being. There’s a certain kind of magic when we work with him, and it influences the way we play and the way we interact with each other. We’re just really focused on being the best band we can be right now.

So does that chemistry between the band and Ric bring out new areas of creativity, or does it allow you to take greater risks? Or is it more Weezer trying not to take as great of risks musically here?
To me, we’re taking the biggest risk we’ve ever taken. Ric somehow just keeps it—I don’t know if I’d say he keeps it honest or that he keeps it “Weezer” or what it is—but the band itself are the keepers of the Weezer flame and are trying to make it bigger and brighter. Ric is an amazing cheerleader, and he’s not afraid to say, “You guys are fucking up right now,” or “That’s a terrible idea.” It’s not like we do everything he says, but when he says something like that, we really hear him. I think his ability to say something like that makes me also really believe him when he says, “This stuff sounds great,” “That was a great idea” or “That was a great take.” It’s not someone just in there yelling, “Go team!” even when you drop the ball. He’ll just have us all do it again until we get it right.

How collaborative was the songwriting on the new album? I know you, Pat and Brian have been given more opportunities to shine on recent albums, but this one sounds like it’s pretty much all Rivers…
On this album, we really wanted Rivers to steer the ship as far as the writing went, and the same thing with lead vocals. I got to sing lead vocals on a song or two in the past, and it was really great for me, and a great chance to grow, musically. Rivers…he’s one of my favorite singers on the planet, so personally, I’d rather hear him sing over myself any day of the week.

Well you’ve been in the band now for 13 years, by far the longest tenured bassist. What have you observed the most about changes in the way the band goes about the business of making music?
One thing I know about Weezer is we do not do things the same way record to record. We come at all these different records completely differently. I’ve found that it’s best to be flexible and not get too attached to one particular way of doing it because we’re probably going to do it differently the next time. I like being in a band like that because I get bored really easily and I need to be challenged constantly. It’s always a growing and evolutionary kind