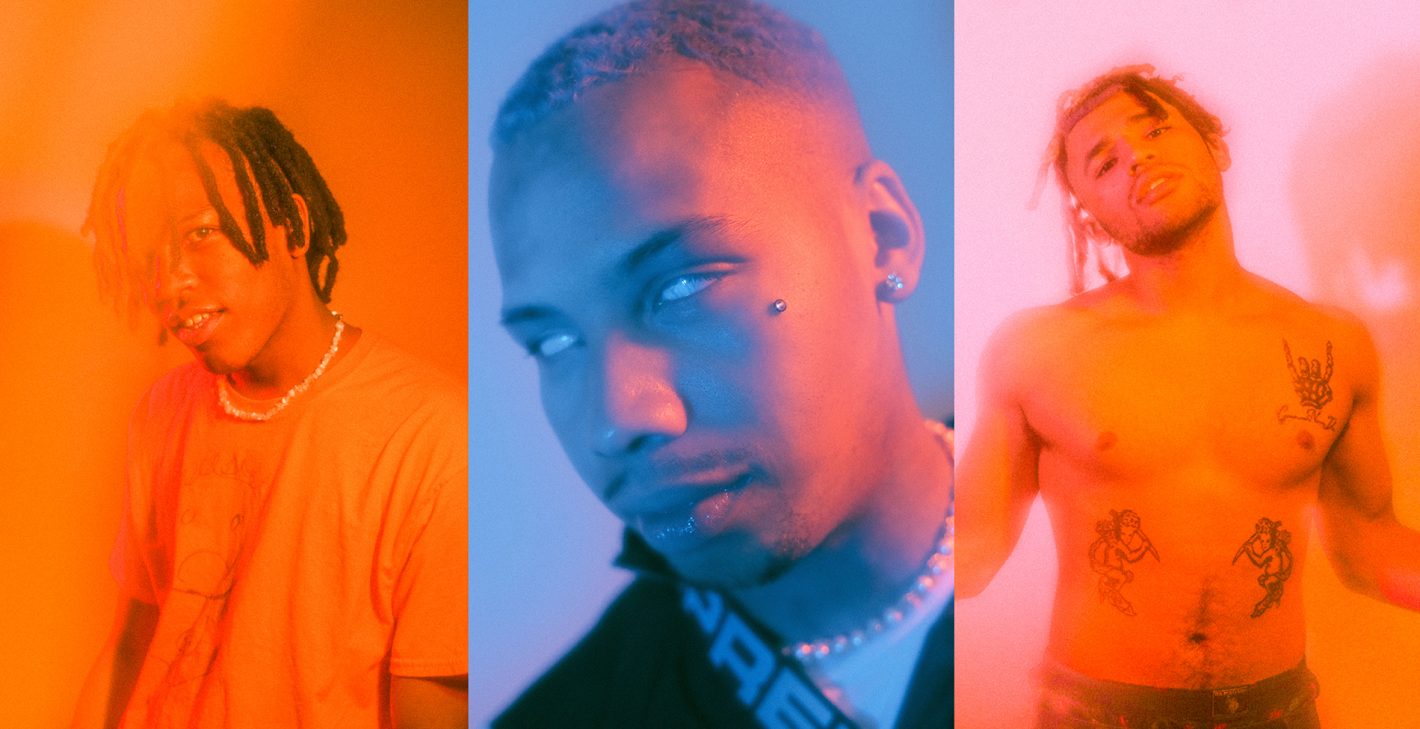 A group of friends from Sacramento dubbed Weirdoze began releasing 30-minute weekly mixes of popular and eclectic songs on SoundCloud to establish credibility in the music industry. Now, at the 28th edition of the weekly installment known as Weirdoze Radio, this ambitious group of artists is slowly finding a foothold in the rap community. Not as DJs, however, but as a boy band.

The turning point was in December 2016 when the crew of freestyling rappers and producers finally agreed upon a group name, making their brand official. While the naming of a band or group may or may not be of major consequence, deciding upon the name Weirdoze seemed to provide focus.

“I just woke up one day—because we all made music, we would half-ass it, we would kick it, freestyle all the time, but never did anything—and I texted everyone, ‘If we’re gonna do this, we have to build some sort of brand and put everything through the brand,’” explained Weirdoze rapper Kneecap. “It’s not even about what you call it. We could have called it ‘Bubble Butt,’ but if you run with it, it’s about what that encompasses … You gotta own it, people will rep anything.”

Since that time, Weirdoze have two albums on all major music platforms—Not Normal, which dropped in December 2017 and The Ultimate Boy Band, released in July 2018. Their style shows signs of Kanye West-inspired production mixed with new age wordplay and Young Thug-like sounds packaged in Odd Future gift wrapping.

They’ve had a hectic schedule of late—DJing a VIP Mansion at SXSW in Austin, Texas, performing as the opening act for Lil Pump, spinning tracks at venues in Sacramento, all while creating a brand that carries weight beyond the art. I interviewed three of the four core members—Kneecap, Arro and Malik (Kelvin was unavailable). What evolved from our Q&A was a conversation about the lifestyle of young artists learning on the go, establishing credibility in the digital age and feeling comfortable in your own skin. Let’s get weird. 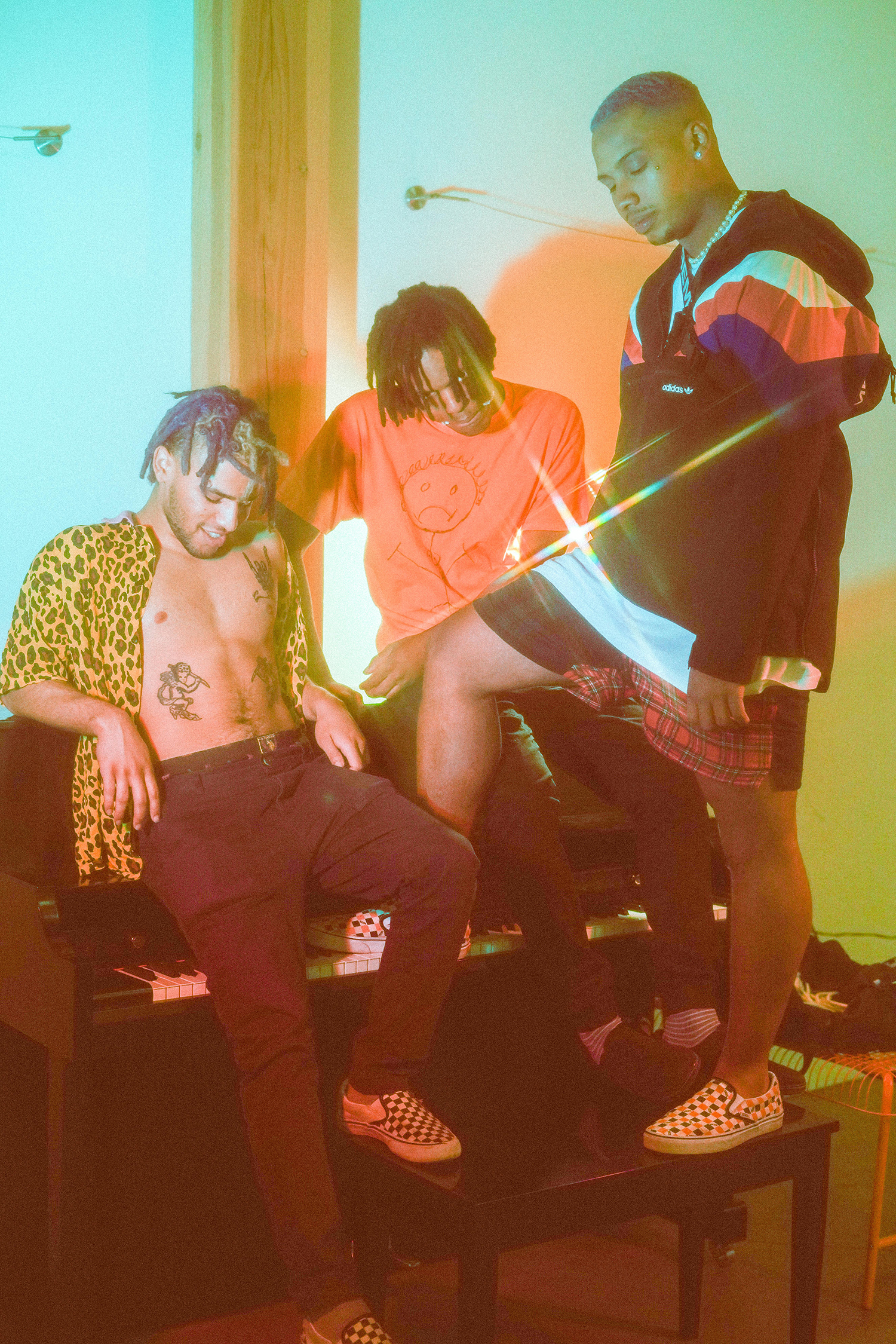 As a group with different styles, and this being a new process, do you do a good job of checking each other?
Arro: I’d say so. We might have a little disagreement but at the end of the day, when we listen to shit, we’re like “Yeah, he’s probably right, this one can sit in the vault.”
Kneecap: We’re not afraid to be, like, “That sucks dude.” [Everyone laughs.]

It’s probably easier being friends, saying those kinds of things to each other.
Kneecap: The reason I say we’re the core, is because even if we get offended, we all know I would never say something—especially artistically—just to hurt your feelings … It’s because I wanna put out the best stuff.

Kneecap, It seems like you’re the bridge to the group …
Kneecap: I met everybody and it felt like we were destined to do something musically, because I feel like every relationship or strong friendship [I have] was built through music.

You mentioned on a podcast that you looked up to the “Yeezys” and the “A$APs” of the world … Not necessarily Kanye West or A$AP Rocky but the overall brand and what it means. Is that the goal of the group?
Kneecap: Hell yeah. I think it’s dope because people don’t even know who’s in Weirdoze; people don’t know specifically what members do what, which is something we can work on, but also it’s dope to me because they still buy into the brand. If I die, they can run with it, the brand is still the brand.

Let’s talk about SXSW.
Kneecap: So Tony [Christ, co-founder of HOF] called and asked, “Are you going to SXSW?” I said, “Nah, we don’t have any money,” and he said, “I didn’t ask you about money, I said do you wanna go?” I’m thinking he’s gonna pay for me, and then he said, “We’re about to do this GoFundMe; you’re about to call everyone you know and tell them to give you some fucking money.” So we called everybody we knew.
Arro: Support our vision.
Kneecap: Yeah, support our vision. It sounds so much cooler when you say “gimme fuckin’ money,” but everyone knows what I mean. The only reason they give you the money is because they support the vision, and anyone who knows me knows this isn’t some fluke. This is all I have, this is all we have.
Arro: It’s all I know.
Kneecap: It was a learning lesson, because we didn’t have any connections out there. We were learning where we should have been as we were there.
Malik: Seeing how many different artists are out there … There’s so many people doing the same thing that we’re doing. If you look at Sacramento, you’ll be like, “Oh, we’re doing this,” but you look at everyone else and you realize, “Damn, we’ve got a lot of work to do.”

Can you talk about the Sacramento music scene?
Kneecap: From what I’ve heard, it’s fucking dope, and the Sacramento artists are supportive, but more than anything what I feel like is shitty out here. The people who don’t make art aren’t supportive.
Arro: They [non-artists] can evolve more.
Kneecap: It’s so ironic because I feel like you have to leave to gain respect … When we went to Texas we gained a certain level of respect just because, “Oh, they left Sacramento.” I feel like you shouldn’t have to leave to get that respect.

How has Weirdoze Radio helped?
Kneecap: DJing was my way to sneak into the industry; I was like, “If I play in the club, I can play my own song.” And you can get paid from DJing way faster than from rapping.

That’s interesting, the idea of being able to play your own music.
Kneecap: The more in the future we get, the less inclined people are going to be to listen to new artists—because after hearing someone who sucks 10 times, you’re not gonna wanna keep listening [to new artists].

Which makes me think of the parallels with social media—how we put ourselves in this metaphorical bubble by who or what we read. It kinda feels the same way for music.
Kneecap: Yeah definitely. Music is so controlled. It’s just easy, people go through a lot in life, and you have so many decisions and complications; why make music hard? Lemme listen to what everyone else is listening to.
Malik: The average person is more scared to start a trend, being the first person to like an artist, especially when it’s a new type of sound.

Were you guys always comfortable with this “I don’t give a fuck” mentality?
Kneecap: I would never say, “I don’t give a fuck.” I always care what people think about me, and I feel like I’m super insecure and self-conscious but I can’t let that stop me from doing what I do.
Arro: You learn to embrace it.
Malik: I learned to adjust, because I was moving around to hella different schools when I was younger and I was always trying to find new friends, and I just realized no matter how hard you try to conform there’s always gonna be something they don’t like about you.

And in addition, you essentially have a 24/7 job right now because you never know who you’re going to run into.
Kneecap: And you never know who the fuck is in the room, so if you’re charismatic, you’re giving off that vibe, people can pick it up. In the past I fucked shit up, not by being negative, but by not saying anything. There’s probably someone important in the room and I’m just Mr. Solo Dolo by myself. So I’m just trying to put myself out there more.

That’s a good point. You guys have a show at the Holy Diver coming up—what should people expect from your performance?
Kneecap: Our shows are hella fun. When I make songs I think about performing them. That’s why “Burr” is like it is. I think of crowd engagement … Giving something for people to feed on. You ever been to a show and everybody’s singing the song and you don’t know the lyrics? You’re like, “Fuck man, I would give anything to know these lyrics right now!”

Do you think there’s a global audience for your music?
Malik: Out of 10 million, I feel like 1 million would like our music.
Kneecap: But it’s like how do you get 10 million people to listen to your music? You never know where your fans are … Numbers don’t equate to fans showing up sometimes.

But popularity doesn’t necessarily equate to talent.
Kneecap: Honestly, part of it is talent, but I feel like everybody has talent. For what we’re doing it really is a popularity contest. When you look at A$AP, or Yeezy, or Odd Future, they’re the most popular. Who’s to say this person’s more talented than this person?
Malik: How many plays did Kanye get off that “Poopy-Di Scoop” song?
Kneecap: Yeah, that’s why we’re trying to build this brand and give our all at our shows and that’s why I DJ the way I do, giving that energy, because you’re just selling your brand. People want to do what’s popular; so it’s really trying to figure out how to be as cool as I can fucking be, and not in a fake way, in the most genuine way possible.

See Weirdoze live at Holy Diver (1517 21st St., Sacramento) on Wednesday, Sept. 5, 2018. Also performing will be Austie A, Igwe Aka and Vonnie, with special guest Nate Curry and sounds by Robbie. Tickets are $15 and can be purchased through Holydiversac.com. Doors for this all-ages show open at 7:30 p.m.