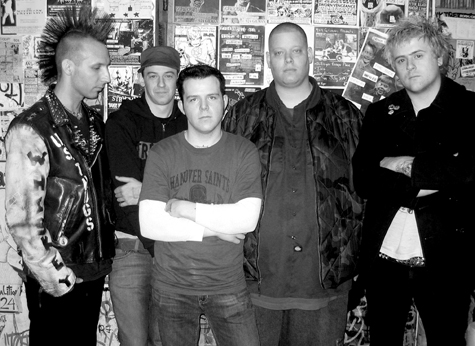 Sacramento street punk legends Whiskey Rebels are throwing in the towel after more than a decade of rockin’, and they have lined up two epic Northern California farewell shows on Aug. 31. and Sept. 1, 2012 for fans and friends to celebrate, reminisce and sing along one last time.

“We actually kind of stopped playing a little while ago,” vocalist Charles Gladwyn (better known as Big Chuck in the punk community) recently told Submerge. “Different friends of ours mentioned many times that we should play a last show, so we just said screw it, and we decided to do it. Not to say we won’t have a good time, obviously. There was no big dramatic breakup necessarily, we just kind of stopped. So we thought it would be fun to play the songs one last time, you know?”

Whiskey Rebels formed in 1999 and since has toured countless times up and down the West Coast. They also did several East Coast tours and even made it to Europe once. They released a ton of material: a couple full-lengths on GMM Records, multiple split albums with both Sacramento locals (like the Hanover Saints) as well as other important California punk bands and they were on a bunch of compilations as well.

On Friday, Aug. 31, 2012 catch Whiskey Rebels at 924 Gilman Street alongside Pressure Point, Gravemaker, Factory Minds and Shambles. Doors open at 7 p.m., cover is $10 and all ages are welcome. Then on Saturday, Sept. 1, 2012 it’s your last chance to see them at Plainfield Station in rural Woodland as part of a seriously bad-ass lineup including DCOI, Brain Rash, Union Hearts, Monster Squad, Sabertooth Zombie and Bastards of Young. Doors open for that one at 4 p.m., it’s also all ages and the cover is $10.

“I can honestly say that I don’t think shows like this have been in Northern California in a long time, just in terms of the lineup and these bands all being on the same bills together,” said Big Chuck. “Most of the bands are major Northern California punk bands. They’re all bands that had a big impact on us and on California too.”

Be sure to keep an eye out for members of Whiskey Rebels playing in their other projects: Cold Feelings, Grim Tide and Setting Sons.