Hello, my name is: White Reaper

I remember what it was like to be 20. I didn’t have a clue. Not a fuckin’ clue. State college, you say? An institution of higher learning…yes, yes of course. I suppose I was making strides in the right direction, but for the most part I was a capricious idiot whose only real concern was attending just enough classes to float a 2.0 GPA. As for the songs I was writing at that age? Steaming piles of hot dog shit. I’m mortified beyond belief just thinking about them. So when I look at a band like White Reaper from the rarified air of Louisville, Kentucky, barely out of their teens and writing full-flight rock ‘n’ roll punk for Polyvinyl—I’m not only impressed, but humbled.

Tony Esposito plays guitar and sings. He’s one-third of White Reaper, whose take on punk rock spreads itself across the spectrum of noise pop while evoking distinct moods of the Ramones and Black Lips. The other two-thirds of White Reaper? Nick and Sam Wilkerson, who just happen to be twins.

“I met those two in fifth grade,” reminisces Esposito from his home in Louisville. “We started playing together when we were 13, 14; pretty much ripped off Minor Threat and were super into hardcore punk. I [had] played drums in a Christian church band for a while [laughs]. I definitely upgraded.”

It stands to reason that borderline pre-pubescent boys actively trying to mimic Minor Threat have at least a puncher’s chance in their musical future, and so it went. But to say that Louisville isn’t the first American city to come to mind when considering the rock ‘n’ roll landscape would be a massive understatement. In fact, call me ignorant, but up until two or so months ago when White Reaper appeared in my inbox, I’d never knowingly heard any band from Louisville, let alone one that lent itself to punk.

“In terms of the scene here, it really comes and goes. Before we had started playing shows, there wasn’t a whole lot going on, a drought of sorts,” he tells. “[But] there was never a point in time where we thought we couldn’t do it. No matter what the terrain was like. It’s really all we have; all we’ve ever had. We never really thought of doing anything else.”

Which is to our collective benefit. Because White Reaper’s six-song, self-titled debut has it going on, and then some. With production that’s both tinny and ballsy at the same time, “Cool” should be all a listener needs for an immediate and repetitive hook, as Esposito flits a descending howl into the gratifying simplicity of “She can’t even sleep at night!” Lather, rinse, repeat. Lather, rinse, repeat. And while the up-tempo, two-minute material is what initially leaps out of the speakers at you, a song like “Ohh (Yeah)” is evidence that the group is more than comfortable slipping into the mid, deviating from the more traditional punk panorama. Esposito explains…

“As much as we love punk rock, we’re sick of the word. I mean, that’s all anyone’s ever said to us. ‘Look at these punk kids! Look at these 14-year-old punk kids, man!’ And we’re kind of trying to be a little bit more than a punk band. Because I feel like the word ‘punk’ kind of cheapens the music, in a weird way. Not that I don’t absolutely love it, but I think it’s a lazy word. We just wanna play rock ‘n’ roll. That’s the main goal here. That’s what everyone wants, however we can do it.” 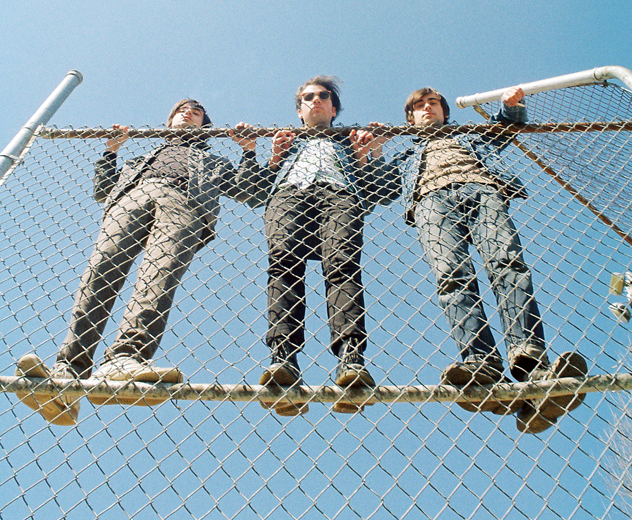 A telling amount of youthful optimism steps forth in the way Esposito makes such a statement, and at the risk of sounding nostalgic, I’ll say it’s refreshing. Because there’s a certain attitude that comes with musicians at such an age that simply can’t be replicated 10 years down the line.

Words like “naiveté” and “innocence” are off-point because they’re backhanded and smack of jadedness. It makes more sense to plainly recognize that White Reaper’s forthcoming national tour will be their first trek to the West Coast. Hell, Esposito has never personally traveled west of Texas. And at the age of 20, with Polyvinyl backing your kick-ass, yet-to-be-released EP, why wouldn’t you be excited for this first official stint on the road?

“The rush you get waking up on a different floor or a different couch in some dude’s house somewhere,” says Esposito with a mark of whimsy, “trying to find something to eat that’s not gonna kill you; trying to stay clean. A lot of people will say they’re afraid to tour because it’s not as glamorous as it may seem, but honestly it’s the coolest fucking thing there is, in my opinion. I’m really excited to see Denver. I’m excited to see California. I’m expecting to love it.”

None of this is to say, however, that White Reaper isn’t already a seasoned live band. The material on the EP was written well over a year ago, they practice every day, and have been playing in and around their home turf with frequency since inception. Which led me to the curiosity of what hot spots might be slipping under the radar of a West Coast mind; a good portion of, if not all of the South is often skipped on your average national tour. There are of course exceptions: Athens, Georgia; Asheville, North Carolina; Nashville; Atlanta, etc. But for the most part the South will not make up the meat and potatoes of most circuits, to which Esposito can attest.

“It’s a very weird part of the country,” he begins in a head-scratching tone. “Louisville’s fucking weird, man; Lexington—I think it’s the second biggest city in Kentucky—is also fucking weird. There’s not really a certain demographic. There’s a lot of small groups of people that are into a bunch of different shit. [But] speaking of Athens, Georgia—Athens, Ohio. We played a couple shows there, and they go fucking nuts during Halloween. There’s like five graveyards in that city that are fabled to make a pentagram shape.”

Perhaps as much as anything, White Reaper’s coming trek will benefit the trio by giving them a chance to break out of their daily routine. Having made music the A-number-1 priority in life, there seemingly isn’t a whole lot more Louisville has to offer them at this very moment. But you can bet touring the country with Young Widows under the guise of a hip label is going to offer them that much-needed change of pace and exposure.

“Oh man, I hope that we see significant changes,” says Esposito. “Not that we have super shitty lives right now—we’re just bored all the time. We don’t go to school, we don’t have jobs, we don’t do shit. We just get together every day and play music real quick. My mom teaches piano to little kids, so we gotta get in here around noon and then we just go through the set as many times as we can, as fast as we can. It’s so funny—there’s such a small window of time to practice, but then we have all this free time on our hands.”

I have a feeling, though, that things are indeed going to change for White Reaper. A band this good, this young, and motivated enough to make it via Louisville? They’re bound to make a push. So come to the show. Say you saw them the first time they came to California. I’ll be there. And I for one am glad that Sacramento is in on the ground floor.

See White Reaper live in Sacramento when they play Witch Room with Young Widows on June 26, 2014. The 18-and-over show is $10. For more info and for a full list of dates at Witch Room, go to Witchroomsac.com.