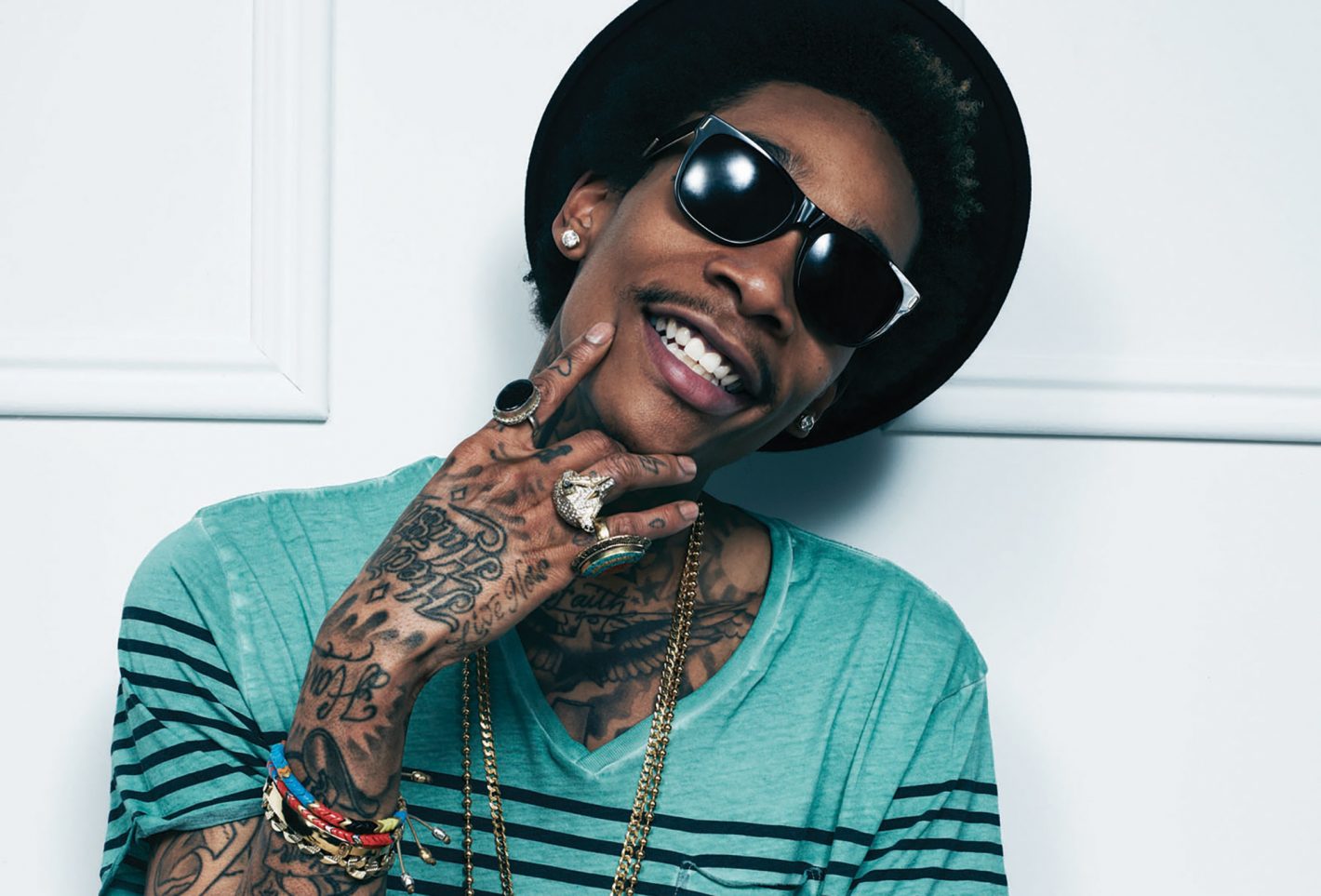 At 25 years young, Wiz Khalifa couldn’t be in a better position. After breaking into the music industry some five years ago, he has endured and persevered, earning his place among rap’s superstars. A product of Pittsburgh, Penn., a city not known for contributions to the hip-hop landscape, he made a name for himself through mixtapes, eventually inking an ill-fated deal with Warner Brothers Records. What would be a knockout blow for most was a lesson for Wiz, giving him the insight and experience to thrive as an artist and a businessman. Never slowing down for a second, he steadily released free music and toured non-stop, catching the ears of the masses with his 2010 release Kush and Orange Juice. From there he landed a deal with Atlantic, and on the strength of his single “Black and Yellow,” off his official debut Rolling Papers, Wiz Khalifa became a household name.

For a well-publicized stoner, Wiz (born Cameron Thomaz) is a focused and determined individual. Perhaps even more, he is very self-aware and in control. He has built a team of artists and producers around him, and instead of trying to keep up with the rest of the pack, he is paving his own lane. That statement is confirmed on the cover art for his soon-to-be released sophomore release O.N.I.F.C., which finds Wiz shirtless, exposing his tattoo covered body, draped in what looks to be a snow leopard fur coat and white leather pants with red trim. He is the rock star rapper, unapologetically eccentric, operating in a world of his own. Fans love him for this, so that is what he gives them. 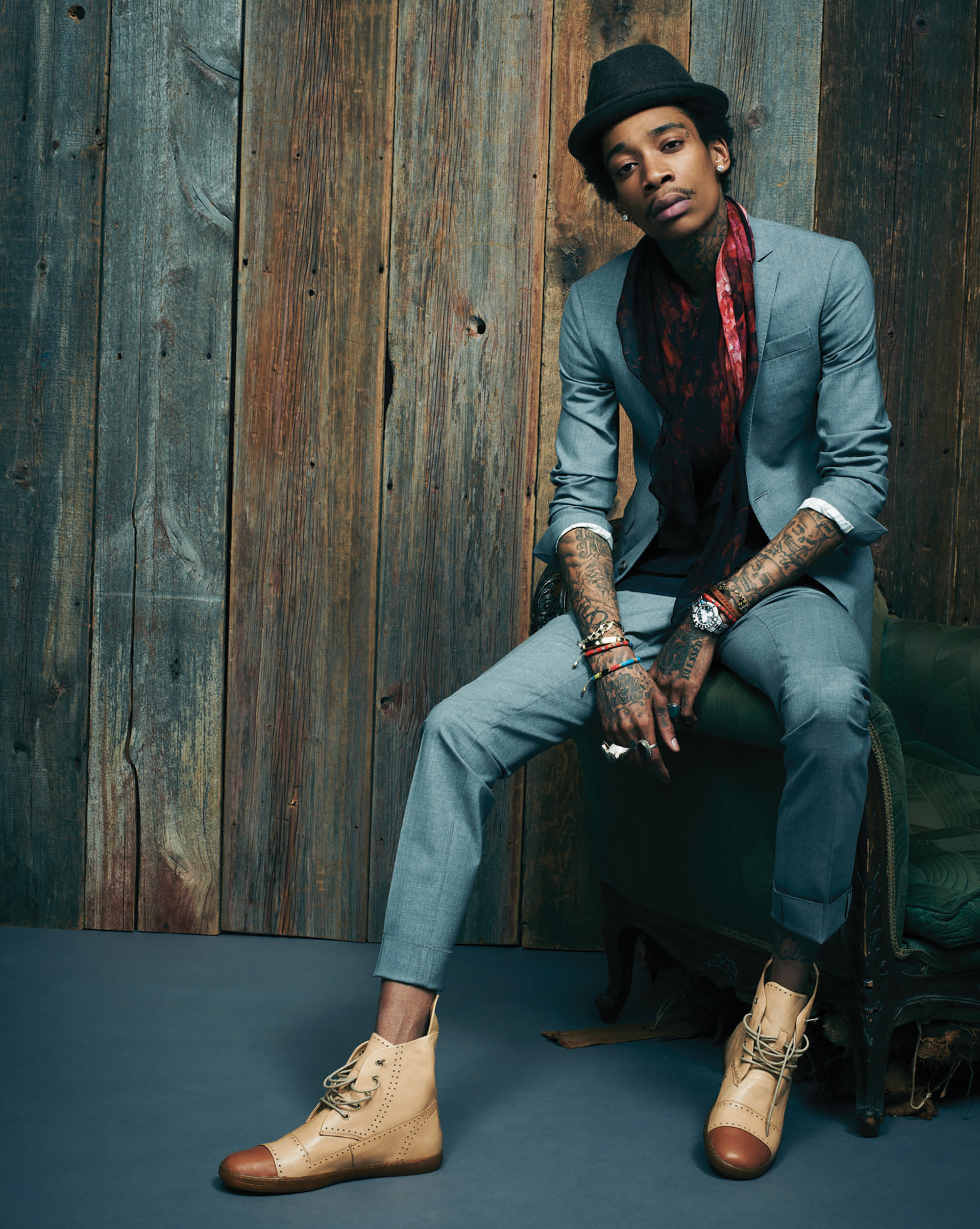 When you were growing up, who were your favorite rappers, and with that, who did you mold yourself after?
When I was young it was Bone Thugs-n-Harmony, and then in my early teens I really got into Wu-Tang and more classic hip-hop. Then, when I was like 16, that’s when I got into Dipset. There were a bunch of rappers, but I was also into rappers movements. Cam’ron and all those guys, I just really liked their whole movement. I always loved Snoop, he never changed in my eyes. But yeah, out of all those, Cam’ron was my biggest idol. I still freak out when I see him.

And I see you got him on your new album.
Yup, and I’m still freaking out.

I really respect the fact that you don’t load up your albums with features and keep it simple with one or two.
Yeah, I try to keep it organic. These are people that I really have relationships with. I speak to Too $hort [featured on Rolling Papers] everyday, hit him with a text or whatever. We’re all friends outside of rap.

With all the success you’ve earned over the past couple years, how much of it was planned?
Well, I’ve always wanted to be a guy that was known not only for making music, but also for having the best brand. I always wanted to be known for being more than a musician. I’m not necessarily trying do what everybody else has done, but do what I do best. I think through that I’ve been able to capitalize and make some good moves. I took the long road, took the time to go through and work out all the details, that’s what put us in the best position.

You had made a name for yourself prior, but I feel with Kush and Orange Juice things really took off and you established a sound and style. During that time, what was it that made things start clicking?
I just met a couple people who were more like me, like Curren$y. It made me really confident in that lifestyle and the things that we believed in. Stuff we were doing, people didn’t get to see because it wasn’t on that stage, but we were doing shit that people were rapping about or saying they were doing but weren’t. We were really doing it. It was an everyday type of thing, just that confidence and being knowledgeable about how things work. Like I said, I take the long route. I might have been talking about some of the things on Kush and Orange Juice two mixtapes before that, but I didn’t know as much about them by the time I got to that point. I had been on way more planes, drank all different kinds of bottles of champagne, stayed in all kinds of hotels. All that added up and stuck.

What struck me was the beat selection and how cohesive it was. It’s like you found your formula, and after that, it all come together.
I think the cohesiveness that you’re talking about came from me just being out on tour just thuggin’ it out, working on the road. All we had were some computers, some weed and different hotel rooms. We were having fun, and every night was an adventure, and in the morning, we needed a soundtrack and that’s what Kush and Orange Juice was.

After Rolling Papers, your first official major label release, you wrote a letter to your fans more or less apologizing, saying it wasn’t up to your standards. I can’t recall an artist ever doing something like that. When did you realize the album wasn’t your best work, and what did admitting your mistakes do for your creatively?
Well…I’d say it was the process. Not necessarily the songs, but I’m used to living with a project much more, going to bed and waking up with an album. With Rolling Papers I didn’t have that attachment to it, so I didn’t get to sell it to people, like, make their brains understand why they should fuck with it as much as I fuck with it. That’s my fault, that’s where I fell short. Admitting that, and moving on from that, put me where I am now. With O.N.I.F.C. I’ve been putting it into people’s brains since I came up with the title. I sold the whole idea to my label: explained the artwork and the whole vibe around it and what I want the project to be about. To me, it’s about expressing personal freedom and just being your own inner self. You wouldn’t understand it if you get it in bits and pieces, but when it comes as a package, that’s when it all makes sense.

Having that first album out of the way, I imagine you were in a better position to dictate these ideas?
Yeah, but it was more not being afraid to take the proper time and speak up for what I believe in. There are times when you’ll have a room full of people saying they’re going to do this and do that, and it’s easy to just be like, “Yeah, yeah, let’s do that.” This time around I was more like, I want to do this on this day, and I want it to look like this and present it this way. It’s paying attention to the small details and triple checking everything to make sure it’s all the way how I would do it. Not just how I’d do it, or how they’d do it, but how we’d do it. It’s how we’re going to do this collectively and connect everyone on both ends.

To wrap things up, in your opinion is it harder to obtain success or keep it?
I think it’s equal, man. When you get success there are a lot of things that look like they might be good for you, but you have to be able to say no. Saying no is the hardest part, that’s the challenge, just fighting that temptation to do typical bullshit. When you learn how to remove yourself from situations, and how to be bigger and better, that’s when you really learn how to really hold on to success.

Wiz Khalifa will play the newly re-named Sleep Train Arena on Nov. 11, 2012. Tickets are still available (though probably not for long) and start at $32.50. They can be purchased through http://www.wizkhalifa.com/. While you’re at the website, you may as well pre-order his upcoming album O.N.I.F.C., which will be available everywhere Dec. 4, 2012. 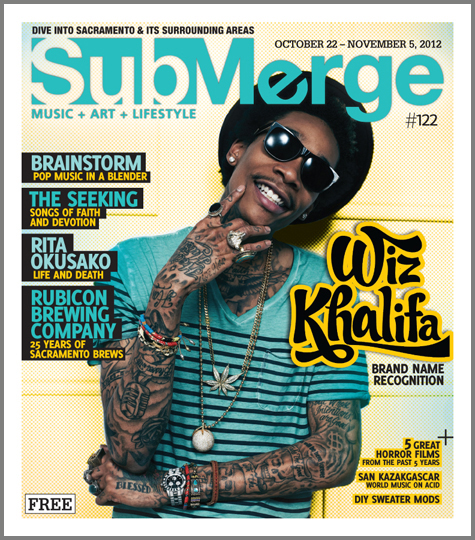