Dispatches from the Twilight Zone: Former Folsom Kids Groove Down the Milky River as Worthy Goat 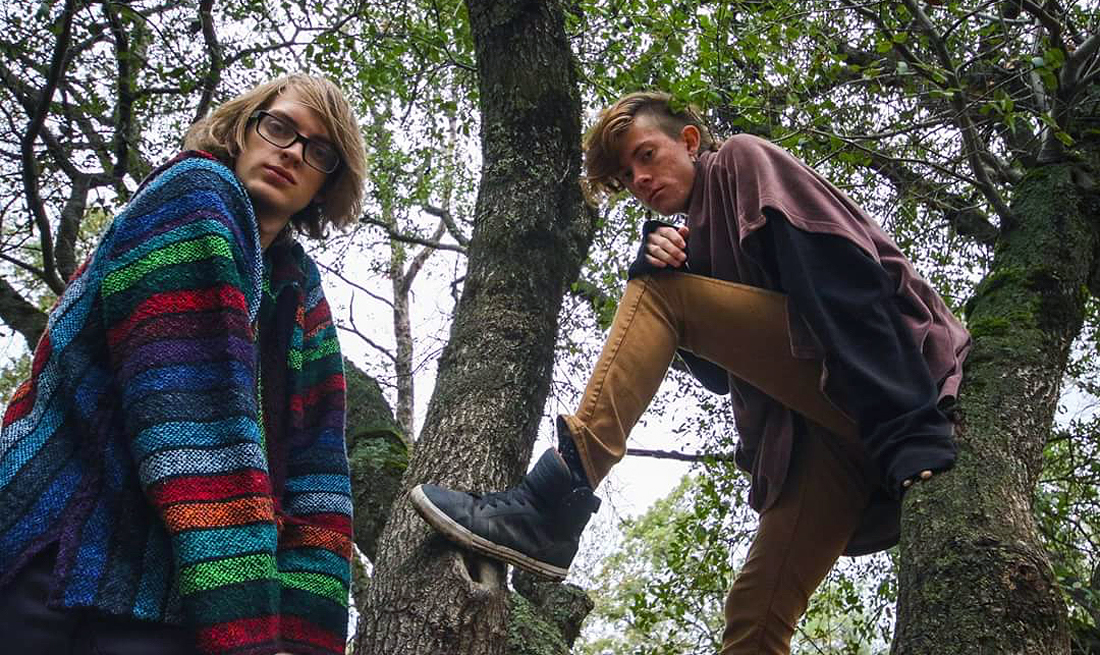 Worthy Goat sounds like nothing I’ve ever heard before. It’s like aliens intercepted space-audio from Grateful Dead and Daniel Johnston albums that got mixed with some episodes of Spongebob Squarepants and were so enamored by what they heard, they decided to form a tribute band. As I watched them play outdoors during a gorgeous drizzling night at Oak Park Brewing Company a few days shy of Halloween, I was impressed by these young guys doing their own thing with some honest to goodness nerdy folk jam rock that had homeless people stopping on the street to dance.

Justin Carter and Bryce Mondul, who are 21 and 19 respectively, met five years ago at a guitar program at Folsom’s Vista Del Lago High School. They became good friends and have been hitting open mics and shows throughout Sacramento at a frantic pace in recent months. After three attempts at recording their debut album, Jangle Beats in the Valley of Repeats, they hooked up with Sacramento’s Pat Olguin (Cake, Black Eyed Peas, Tesla, E-40) at Velvet Tone Studios and put together a great-sounding record that seems like it couldn’t possibly be the work of a duo so young.

The result is an aptly titled work that is confetti of different sounds and vocals that are equal parts pleasing and eerie. It’s the kind of music you’d love to listen to while someone pulled you around in a wagon while you drank whiskey to erase all of your worries. One of the tracks, “Banana Boat,” has a line about going down a river made of milk. I don’t know what that means. But I totally know what it means. The album is full of wacky grooves that had me smiling all the way through. A later track “Fish Eye in the Sky” is a trippy, fun jumble of a song that I love as well. Mondul’s helium-flavored vocals are not of this earth, and Carter brings a percussion groove that sounds like something right out of The Twilight Zone.

I was impressed by their performance and talked to them after they were through playing. 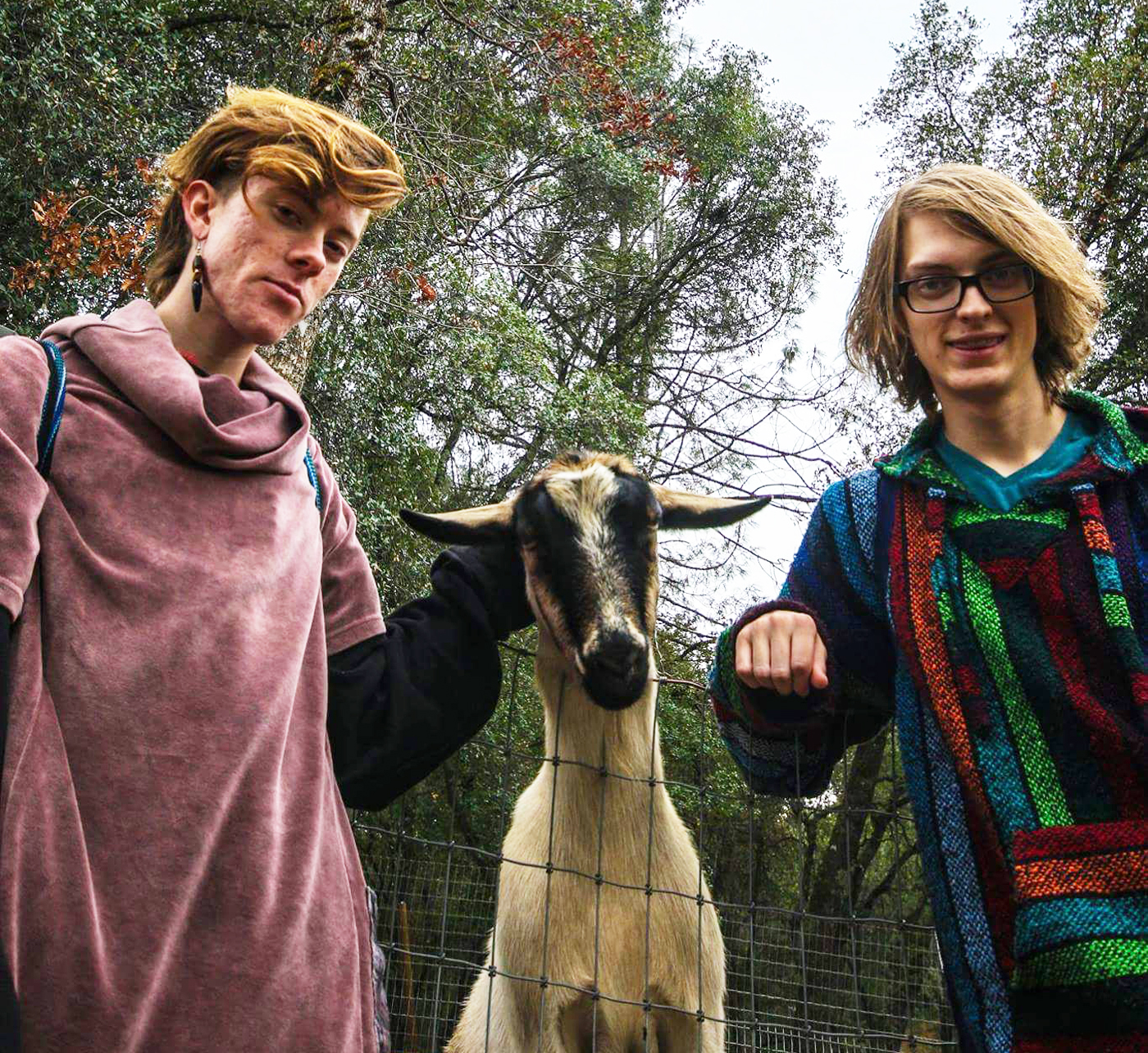 What’s the secret to jamming and not sounding like a big old mess? You sound very smooth and polished.
Bryce Mondul: You just gotta have a lot of failures and still feel like you’re failing.
Justin Carter: It feels like a fight. You gotta feel like you’re really ready for something just like a fight. You can’t let your guard down. We play so much, and he’s always trying to throw me off.

Explain your chemistry.
JC: It’s just a lucky break. I think having good life chemistry gives you good music chemistry. We don’t have the same opinions, but we talk about everything that we think about and spend time together not playing music. Just figuring things out and it translates to the instruments I think.

What do you spend time figuring out?
BM: We spend a lot of time trying to figure out how to make our ideas work in the same song. There’s a lot of compromising and whittling down each other’s ideas.
JC: We criticize each other over our love lives a lot, and we talk about politics and philosophy and anti-philosophy.

How did you first meet?
JC: Our projects were really weird songs. We were awkward kids and other guitarists didn’t get what we were up to most of the time.
BM: The first time I saw him play anything was a song called “Dude, Did You See That Unicorn?” and it was just this odyssey of these weird musical flavors and rhythms. I thought that was really cool and I told him that, and he was like, “Who are you?” I heard people were telling him that he didn’t know how to play guitar and stuff like that.
JC: People were telling me that I broke all the rules, and I had to tell them that I study classical music theory quite a bit and there’s no such thing as a rule.
BM: I was in a band looking for a drummer and I just showed up to his house and I was like, “Hey you’re the guy with the unicorn song.” That band was called Morning Bun, and we had a lot of really embarrassing performances under that name.

How embarrassing? What do you mean?
BM: We had this battle of the bands thing that these guys were putting on at a bowling alley. The stage was over the lanes and they just had equipment and cords daisy-chained out there. They said they really liked us, but had really never heard of us and were just using us as guinea pigs to figure out the setup. One of the reasons we have been doing this for so long is to recover from the shame of that one night. We’ve been trying to build back up since then.

It’s kind of like when Batman’s parents were shot.
JC: Probably the funniest thing about that was that my mom has a newspaper clipping from that event on her fridge, and they mixed up our name with the act that was on after us, and their name was Substitute for Talent.
BM: It’s probably more fitting of a name for how we performed that night instead of how Substitute for Talent [did] that night.
[FUN FACT: Substitute for Talent actually has the video from this very show at Folsom Lake Bowl on YouTube if you search for them by name]

At what point did you realize that you were ready to make this album?
JC: [Mondul] wrote a track list a couple of years ago, and I held him to it. It’s gold, and we need to record it from start to end. We worked it out instrument by instrument. We had a bunch of failed attempts to record it, and we decided to shell out the money for a really good studio and a really good recording engineer, Pat Olguin.

Why did the previous attempts fail?
BM: The first time just sounded bad, recorded with a mic and a Macbook. Then we got a mix that we were happy with, and I got these speakers that have a super strong magnet on the bottom of them. I put them on my laptop, and it erased. I instantly heard clicking on the hard drive, I turned it off and tried to boot it back up, and not even the operating system survived. Everything was gone.

You just feel like your heart crushes in your chest when that happens.
JC: Then we tried another studio and it just wasn’t cutting it. The engineer just didn’t show up one day, and we called it quits.

One of the things that hit me about the first track I played on your record “Banana Boat” right away I just thought, “This sounds really good. This isn’t just some amateur home brew album.”
JC: We put so much hard work on every single note. Some of the instruments were really weird and Pat would just say, “You guys come to me with a problem, and I’ll come up with a solution.”

Is it hard to just pull the trigger and say, “OK, we’re done with this, it’s perfect!”
JC: Not when you run out of money [laughs].

Worthy Goat’s physical album release is scheduled for Nov. 11, and you can follow them at Facebook.com/worthygoat to find out more. The band will play live at Shine in Sacramento (1400 E St.) on Nov. 26, 2016 with Fallout Kings and Iscariot. The cover charge will be $7. Check out their track “Got Me Mine!” below.