Xochitl Charms Fans from the East Coast to the West

After finishing the night’s performance, 21-year-old singer/songwriter Xochitl (pronounced “so-chee”) Hermosillo and the other performers had nowhere to stay. It was a cold night in Rhode Island, and the native California girl was in the midst of her first real winter. Then, a stranger from the audience asked: would they like to stay in her basement for the night? The group agreed that it was an awful idea—so awful, in fact, that they couldn’t turn it down.

They woke up to fresh crepes with strawberries. The stranger, whose name was Michelle, turned out to be a kindergarten teacher who, like so many of the strangers Xochitl met during her travels, was happy to help. And it’s easy to see why: her voice is sweet and earnest, angelic but strong, perfectly suited to her catchy riffs and emotion-driven lyrics. With just an acoustic guitar and a microphone, she can easily captivate an audience.

Xochitl will be the first to admit, she never plans. So when a friend floated a spontaneous idea of traveling around the East Coast, couch surfing and playing music, the answer was, “Why not?” Xochitl, who had spent her entire life in Sacramento, ended up making the trip solo. She connected with an aunt in New Hampshire who had a spare room, and the rest of the adventure unfolded day by day.

Xochitl left for the East Coast in fall 2013 with a one-way ticket. “I was silly. I went from October to March. The weather was negative 18 degrees. I’d never even really seen or been in the snow,” she laughs. “I had to go shopping, and learn to wear the tights under the jeans and to wear three pairs of socks.”

Dropping everything to live with an aunt on the other side of the country, in the middle of an East Coast winter, hoping to fund her trip by CD sales and the sheer generosity of other humans…not every 20-something would have the guts to leave with so little planned out. But once Xochitl decided that music was going to be her career, she had few reservations about taking risks to make her passions happen. She had started her career as a musician when she was about 19, after realizing that college wasn’t the right path—music was. “This is my passion. Why am I waiting anymore?” she said.

She found herself almost completely alone on the East Coast, where she learned to drive in the snow for the first time in her aunt’s tiny Honda Civic, bouncing around to different venues and playing open mics whenever she could—New York, Rhode Island and her favorite spot, Boston. She had a little money saved up from her last job, but says her trip was funded almost entirely by CD sales and the generosity of strangers. “People were just so nice and so supportive.

It was unbelievable. I could cry just thinking about it,” she says, smiling. “People would say, here’s a $20 bill, we really want to support you and you’re really talented. I hope this fills your gas tank.”

The hard work paid off, and soon, Xochitl wasn’t so alone. “There was this wonderful creative energy,” she says, remembering the people she met. Nights were spent performing, meeting fans and fellow musicians and “jamming in kitchens until 5 a.m.” Days were just as busy, always looking for that next show, that next opportunity. “Everyone in show business knows that emails in the afternoon is where it happens,” she explains. In time, she went from open mics to playing fully booked shows. “Never a dull moment,” Xochitl says. 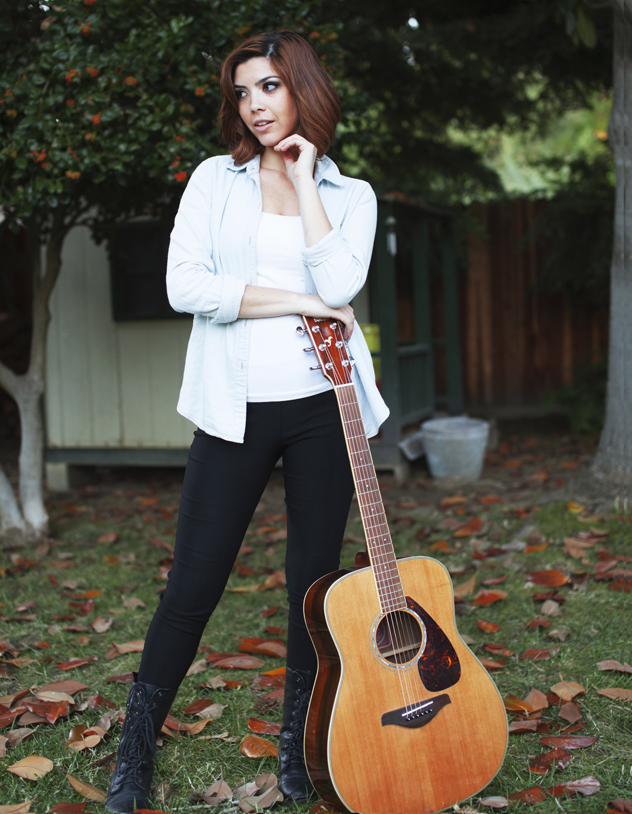 She remembers the first month being really amazing, when everything was new and different, and then, “you lose your peak and kind of get homesick.” Around Christmas, the family back home begged and pleaded (“it’s OK, you can just come home”), but she fought the homesickness and plowed through. “I fell in love with it,” she says with a wistful sigh.

Xochitl’s last night on the East Coast was the inspiration for the song “Bring Me to You,” which she wrote while sitting on her cousin’s bed, staring out the window. “I had never seen anything more beautiful in my life,” she says, remembering the sight of the sunrise on fresh snow and the very surreal, bittersweet experience of knowing she was about to leave the East Coast for good. The guitar part was actually written back in that basement where she stayed in Rhode Island.

Returning home was a little difficult, mostly because Xochitl was worried that she would get too comfortable and slow down. Because if there’s one thing she hates, it’s being bored. She’s kept herself busy, using Sacramento as a home base and making trips out to play shows along the West Coast—Santa Cruz, Los Angeles, San Diego and points in Oregon. Xochitl thinks eventually she’ll move to San Diego, where she’ll never have to shovel snow again, explaining that deep down she is “a big beach Cali girl.”

Another new development has been working with a full band—friends and fellow Sacramento musicians Justin Carson and Casey Groat, who also produced her upcoming EP. Xochitl loves the new creative energy that comes from working with a full band and is curious to see what sound will come out of their trio. “It might get a little more jazzy, a little more funky,” she says, looking excited.

So, how about that full-length album? Xochitl says that she’s usually “too antsy” and when she writes music, she wants to release it as soon as it is done. At the moment she can’t imagine releasing 10 tracks at once and then not sharing anything for the next two years. Similarly, she doesn’t revise anything she writes. “I’m not a polished singer/songwriter. I just sing and write exactly what I’m thinking and exactly what I’m feeling,” she says. “I want it to stay genuine.” Revising means she’s overthinking the song, and will make it less pure.

Given her distaste for perfection, it shouldn’t be surprising that she cringes when asked if she has any interest in producing. “I hate recording!” she says. “Too perfectionist. I get antsy, like, I want to get out of this box! I need more lenient and open space.”

For now, she’s 100 percent focused on the release party for her new EP, Lion Heart, coming up on Feb. 28, 2015, at the Shine Cafe. “I’ll be running around like a crazy lady until then,” she laughs. She’s also playing 20 shows in the Sacramento area over the next couple months beforehand—a testament to her love of being busy.

Once the current songs have been released, it will be back to traveling and writing, being inspired and exploring new sounds. “I’ll have a whole new clean slate and start fresh.”

It’s an EP release party! Xochitl and Sacramento artist Andrew Castro will both release their respective EPs on Saturday, Feb. 28, 2015 at Shine Cafe. This all-ages show will also include Meghan Bone and Ruby Jaye Fradkin. Doors at 7:30, $5. For more info, visit Facebook.com/xochitlofficial. 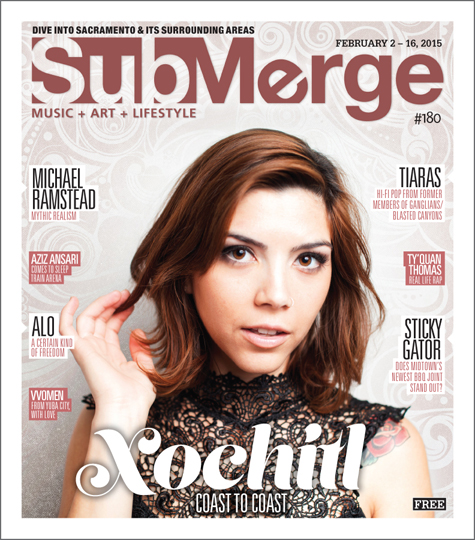