A State of Being

Photo above by Alin Dragulin

YACHT KEEPS THINGS REFRESHINGLY WEIRD WHILE OTHERS PLAY IT SAFE

Where are the PJ Harveys, the Laurie Andersons and the Yoko Onos of Generation Y?

For every CocoRosie out there, there are infinitely more bands that keep their music exceedingly tame. In an age where it seems experimental and outspoken musicians are in decline, the Los Angeles-based conceptual electro-pop group YACHT continues to thrive in the realm of oddity and nonconformity. Sometimes they wear white leotards, sometimes they make music videos with anthropomorphized Smiangles (the band’s triangular “totem”) cavorting about extraterrestrials and sometimes they sing lyrics like, “The Earth the Earth the Earth is on fire, we don’t have no daughter, let the motherfucker burn.” They continue to make some people uncomfortable.

As far as leading members Jona Bechtolt and Claire L. Evans are concerned, that is just fine. They realize that their music is not for everyone. They will also tell you that YACHT is more than a band. YACHT, aka Young Americans Challenging High Technology, is also a belief system and business that the two hold dear. Simply put, it is an extension of Bechtolt and Evans in every sense. In a state of perpetual collaboration on anything from writing books to DJing, blogging, making music, videos and perfume, YACHT is the banner under which the couple releases any creative output.

“We’re always working on a million things at once, we always have our hands in different pots, if you will,” Bechtolt says.

As far as YACHT the band goes, additional members include Bobby Birdman and Jeffrey Jerusalem. YACHT is playing Sacramento’s THIS Midtown in August, which, in case you haven’t heard, is 100 percent free. This is the band’s first official show in Sacramento in at least four years (they did make an appearance for a children’s show at the Memorial Auditorium with Yo Gabba Gabba in 2011).

YACHT has released five full-length albums and two EPs to date, the last four of which were released by DFA records (other DFA artists include LCD Soundsystem, Hot Chip and The Rapture). Shangri-La, their last full-length (released in 2011), was well-received. Clothing manufacturers Freeze CMI liked their single “Shangri-La” so much they ripped the song’s lyrics and smacked them on a T-shirt for corporate entities like Kohl’s and Macy’s to sell, until the band intervened.

With the exception of “Shangri-La,” a sweet pop tribute to Los Angeles, the band’s lyrics are not usually something you would expect to find on a Kohl’s T-shirt. If their futuristic music videos, sound and lyrics don’t make it obvious, Bechtolt and Evans have a penchant for science and mysticism.

Evans has been a science journalist for the last 10 years, writing for publications such as National Geographic and Motherboard. Most recently she connected with Grantland, where she now maintains a science fiction column.

Meanwhile, Bechtolt formed YACHT initially as a solo venture in 2002, with the intent to incorporate technology into his performances and music. A musician and performer since his teens, he is known as a former member of the bands The Badger King and The Blow.

Both Evans and Bechtolt grew up in Portland, but also consider L.A. and Marfa, Texas their homes. The two credit Marfa, famous for its “ghost lights,” with changing their outlook on the world, and serving as a crucial source of their musical inspiration—hence the name of their 2009 album See Mystery Lights.

When I spoke to the Bechtolt and Evans over the phone, they were at their home on the border of Silver Lake and Echo Park (one of L.A.’s most picturesque locations). The playful frontman and frontwoman were still giddy about the link they had posted online hours before for their new mixtape featuring Eric Andre—as in Eric Andre from the Eric Andre Show on Adult Swim.

Dr. MDMA, M.D. is a brilliantly titled compilation of 13 songs peppered with random drops of Andre making proclamations like, “Get your medical marijuana card,” or “Legalize steroids.” The mix was made in a week. Andre, whom they just met days before, sent Bechtolt sound files he recorded on his phone, and Bechtolt cut them up and inserted them in. It’s one helluva danceable mix, including Mutsumi Kanamori’s single “Look Down At Your Feet Below” and Bill Wyman’s “Si, Si Je Suis un Rock Star.”

It was Evans’ and Bechtolt’s first time collaborating with a comedian, and now there is no turning back. In addition to writing their next album (expected to release early next year), YACHT plans to collaborate with more comedians, and is developing a TV comedy show with Amazon about the life of an opening band.

“So we’re in bed with comedy,” Evans says. 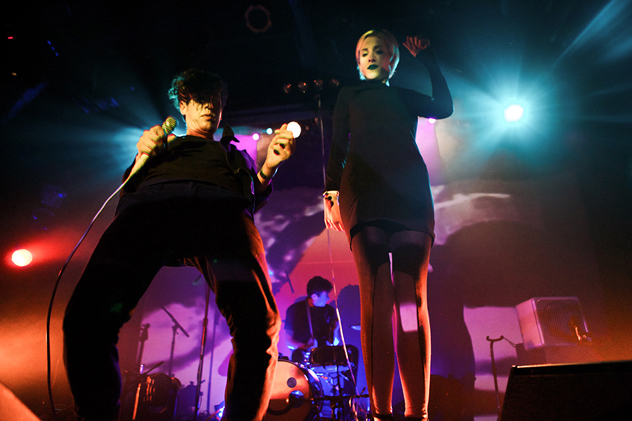 Do you think you will [collaborate with a comedian] again?
Jona Bechtolt: For sure.
Claire Evans: There’s a growing connection between comedy and music subculture. I think comedians and musicians have a lot in common in terms of the lifestyle that they have. They experience the same kinds of tragedies, and when a comic’s show goes horribly it’s the same as when no one comes to see your band, you know?

So does [the next album] require any trips to Marfa?
JB: We’re actually going somewhere weirder than Marfa. We’re going to the gulf shores of Alabama to film this video. And that’s all we’ll say about it for now because it has to be a surprise and a secret.

Claire, I read your piece on Grantland (“Staying Ride-or-Die for Sci-Fi in a Game of Thrones World”); I was curious how that came about, I know the Game of Thrones season ended, but were there other reasons for writing that now?
CE: I wanted to write a science fiction column because that’s something I care about deeply, and kind of wanted to come out guns blazing. I’ve gotten so much criticism for that article but also so much respect, because the fantasy versus science fiction battle is ancient, and violent and real, and I just wanted to position myself as someone who cares deeply about science fiction to the exclusion of other things, and probably to the exclusion of my own educational benefit. I am myopically interested in it.

Jona, do you guys share your feelings on a lot of these subjects?
JB: Usually, yes, we do. If you’re asking if I hate fantasy, the answer is yes, I do.

How do you like [DJing]? I’m curious about the DJing experience versus playing the live shows.
JB: At first [DJing] was really terrifying, I hated DJing at first… With playing shows I don’t feel like I have to make anyone happy… At first I thought we really had to please people [as DJs]. I get stressed out pretty easily.
CE: But when you’re DJing you’re just there and it’s just you and the music that you like.
JB: And it’s really fun to introduce people to lots of tracks they’ve never heard before and play songs that we are really in love with, and see other people fall in love with them and watch them have a physical reaction immediately. That’s really cool. And just getting the chance to spend time with people in a different way is fun, too. Playing shows is an elaborate affair for us.

I really like how you guys have your music but then you have your approach with science and mysticism and all that. Could you describe the overlap a little bit?
CE: Jona and I both grew up in sort of similar DIY and punk rock communities in the Northwest, and so part of our DNA has always been that what you believe and what you do are inseparable entities, that you manifest your beliefs by the way you live your life and the kind of art you make, and the way you share that art with other people. In the DIY community that’s always the way it is. We’re kind of kooks, and we have a range of metaphysical and philosophical views about life, and we can’t separate that from the output because that’s what we’re thinking about, that’s what we’re talking about, and so what we make is always going to have elements of that in it. It’s not necessarily that we’re trying to be dogmatic or we’re trying to lay our philosophy on the line and tell people they have to believe what we believe in order to enjoy our music, it’s just difficult to create a distinction, especially since were creative collaborators that live under the same roof. YACHT is our life. It’s all that we do. It’s all we think about.
JB: It’s not a unique thing that bands and artists have feelings and thoughts and positions on everything. A lot of the time it’s not specifically an outward thing, people aren’t jumping at the chance to say what they believe. And I think that comes from a fear of alienating fans, so we’re fearless in that regard [laughs].
CE: This is something we talk about a lot, is the idea that, I feel like a lot of people in our generation and younger who are making art and sharing it on the Internet, [have] a fear of identifying too strongly with any kind of belief or position. I feel like a lot of people are hiding behind delay and atmosphere and style, and making really cool music but not being sort of balls-out weirdos. The people that we admire the most, like the PJ Harveys and the Laurie Andersons and the Yoko Onos, those are people that cannot separate themselves from their work, and who have crazy ideas and put those ideas in the forefront. There’s a lot of hiding, and I don’t want to hide. I’d rather be criticized for having weird point of views rather than not sharing that point of view with anybody.

See YACHT live in Sacramento at THIS Midtown for FREE on August 10, 2013. THIS Midtown takes place from 4 to 9 p.m. on 20th Street between J and K streets. Would you like to know more? Go to the aptly titled Thismidtown.com.