You Shall Be Heard 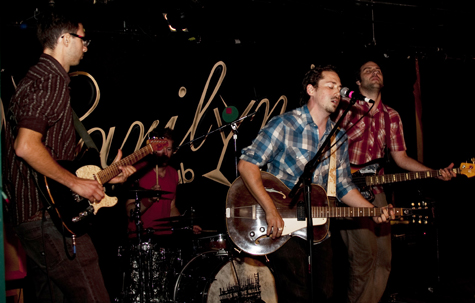 We’ve all spent time arguing over the philosophical question, “If a tree falls in a forest and no one is around to hear it, does it still make a sound?” This age-old question was put to the ultimate test last Tuesday night at Marilyn’s in downtown Sacramento, but instead of trees trying to make themselves heard, it was music. When I first entered the bar it was apparent that they predicted a slow night as the cover charge had been lowered from $5 to only $3. Marilyn’s on K is a pretty cozy venue, but the lack of bodies made it seem more spacious than it usually is.

Before headliners Wires in the Walls took the stage, the show started with the soft acoustic sounds of Love Is. And although the frontman was flying solo without his band, he made sure to fill the hollow room with his soothing voice and acoustic guitar riffs. His set was so full of energy and soul it was no surprise that after the show he explained that most of his songs are based on personal experiences and his “spiritual journey” through life. His audience that night only consisted of four people sitting at the bar, a couple playing pool and six people in the crowd. Every once in a while, a loud slam would come from a game of dice with the bartender at the end of the bar. At one point the lead singer acknowledged the few people that were in attendance and took the time to thank the few individuals for coming.

To my surprise, after Love Is’ set was over most of the audience members left to get ready on stage–they turned out to be in the headlining band, Wires in the Walls. But that wasn’t about to stop the Los Angeles-based band from rocking out. Wires in the Walls, who got their name from the Elvis Costello song, “Green Shirt,” started to play catchy folk-rock jams that made it hard not to tap a foot to the beats. Despite the low turnout, the band played with as much energy as they would have to a sold-out crowd, and the lead singer, Warren Sroka, even broke into a small sweat. All five band members owned the stage with their alternative sounds and seemed like they were having a blast. Unlike most shows, the bartender could be heard too easily in the bar and got the chance to talk to the band in-between a few of their songs. During the middle of their set a young woman left her game of dice to place a dollar in the glass tip jar that was near the stage and received a mouthed “thank you” from one of the guitarists. Before they broke into their latest single “New Symmety,” the guitarist placed a camera on top of his head to shoot their new 3D video of the tour.

“Doesn’t he look great in that headpiece?” Sroka asked with a smile. “I find it hard not to laugh.” Wires in the Walls played their entire set and didn’t seem to be bothered that they were only playing for a few people at the bar, in fact they didn’t seem to be phased by it at all. “It doesn’t really matter how packed the place is, it’s how many people you can connect with,” said bass player Nick Tracz after the show. “Despite the crowd we had a great show. We had a ton of fun.” Wires in the Walls proved to be one band that knows how to put on a great show despite the circumstances. So, if a band rocks out on stage and there is barely anyone to hear it, do they still make a sound? The answer is yes: nothing could have stopped Wires in the Walls from being heard that night.