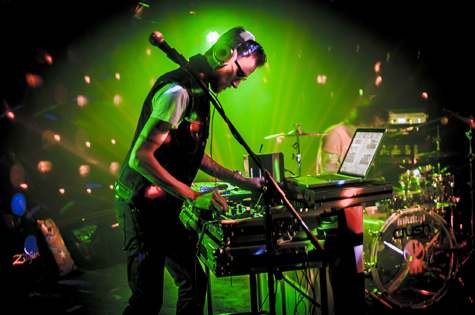 Despite his mostly rock-based background, Zac Diebels aka Z Rokk is making big moves as an electronic artist

On a quiet and cold Tuesday night, students are coming and going from their lessons at Rock Inc., a music school and recording studio with approximately 150 students in Citrus Heights founded by Zac Diebels, better known to many as Z Rokk. Submerge is sitting down with Z Rokk to talk about his new electronic-based album Th Btchrs Bll, but we quickly sidetrack and start to rap about his past. At age 15, when most of us were getting jobs at McDonald’s or the local bowling alley, Diebels took out a loan from his father and purchased DJ gear and enough music to start playing corporate parties, weddings, you name it, as long as it was a paying gig (he eventually paid his father back every cent).

By his early twenties his rock band Simon Says was signed to a major label and touring the world playing alongside groups such as Kid Rock, Deftones and Filter. He’s worked with mega-producers like Rob Cavallo (who produced all but one of Green Day’s albums along with countless other huge bands) and Mark Needham (who has mixed albums and singles for everyone from The Killers to Lindsey Buckingham). He’s had, and continues to have, his music placed on TV shows like Jersey Shore and Project Runway among many others.

He has truly lived what many of us would consider “the rockstar life,” making music his job every step of the way. These days at Rock Inc. he teaches guitar, bass, drums, vocals, even audio engineering and offers producing and mixing for artists. If you can consider it a “day gig,” that’s it, but by night you can usually find him DJing local clubs, remixing songs on-the-fly and generally rocking the party. Check out this excerpt from our interview with the talented multi-instrumentalist to learn more about his upcoming record and what makes him different from a “drag and drop DJ.” 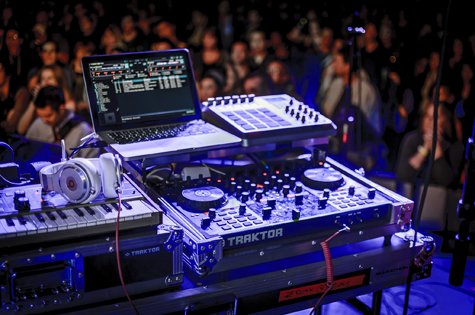 Producing and writing for other artists seems to be something you enjoy and have been keeping busy with lately. Have you always had a knack for helping other artists hone their talents?
Yeah absolutely. What you see now, there are guys like myself that are DJs, producers, writers, they play tons of instruments. They’re not just DJs or just whatever. You’re a go-to tool. Usually a lot of these guys have studios of their own and they’re able to do a lot of things. And for a manager, label, PR firm or an artist, it’s helpful to be able to hire a guy, one person, that can do a lot of these things really well rather than hiring a full team. But you don’t want to become a jack of all trades and a master of nothing, so I think because of my experience working with big producers and big artists, I have the experience of knowing how these guys make records. Now I can transpose that experience to your record.

What sort of projects are you working on now as far as producing and engineering goes?
Working with Jonny Craig a lot. Overwatch, I helped develop them. A lot of stuff for Diamond Dez. A lot of hip-hop stuff. I just got some syncs and licenses with Fox Clothing, Quiksilver and Roxy. A lot of publishing stuff. I do a lot of music for MTV shows, I’ve had so many songs on like Jersey Shore, Keeping Up With the Kardashians, Project Runway, things like that. These days I’m concentrating more on duos or solo artists. I just like it. I feel like in a band setting I usually end up working with one or two guys anyway. I love doing remixes. I’m getting a little tired of the traditional rock band. Rock Inc. has been a godsend because I don’t have to do the studio to pay my bills. I only do records I want to do. I don’t need the money, my business is fine with that. I do records I want to do that make me happy that I enjoy. Jonny Craig makes me happy, Diamond Dez makes me happy, Overwatch makes me happy, Th Btchrs Bll record makes me happy. I’m lucky, not everyone gets to do that.

Tell me about Th Btchrs Bll. What can people expect from it?
Th Btchrs Bll is an electronic, remix, dubstep record. I like heavy music, period. I’m pretty intense and people that know me know that. I’m intense about love, happiness, whatever I do. And I love music that makes me feel emotional. I started listening to 12th Planet a lot more, the Crystal Method, Chemical Brothers, New Order, stuff like that, and I was like, “The songs I love the most are the ones that sound like they should be in a Transformers movie.” Just huge and dirty. I love MSTRKRFT and Death from Above 1979, and I was just like, “I want to make an electronic record that would be like an Automatic Static [Diebels’ solo rock project] record, just really heavy electronic music.”

Having had a mostly rock background, what do you love so much about electronic music and DJing?
My intern and I were just having a conversation about this. He was all, “It’s weird that you’re so into electronic music when you came from a rock band.” I was like, “Not really.” I’ll tell you why. Being in a band, it’s all about this group of guys being on stage performing for the people. When you’re a DJ, people don’t really care about you, they care about the vibe… They can barely see you. No one’s going, “What’s he doing? He’s playing some crazy solo!” You can’t even see what I’m doing. It looks like I’m at a table. No, what they want is, “What is he going to do to us next? What vibe or emotion is he going to send us next?” That’s what I like. It’s all about the energy that you get from people around you.

Let’s talk about your process when performing or DJing live as Z Rokk. You’re not simply queuing up songs and pressing play. You’re actually remixing songs live, right?
Yeah, I’m not a drag and drop DJ, that’s not what I do. So what I do is I’m more of a “remix DJ.” It’s not like I invented this. DJs do this. I use a program called Traktor—a lot of DJs use Serato. Serato is more traditional like playing a record, drag and drop and press play, or scratch over it type thing. Traktor is made by a company called Native Instruments and it’s really revolutionized things because it allows you to take every piece of the song apart. Kick loop, snare loop, hi-hat loop, whatever. I can turn those pieces on and off on the fly, I can put effects on them on the fly and then I can sync them to each other and play them to another track. I’m remixing live. You’re hearing a version that’s never been made that I’m making up on the spot and it’s different every time. And what’s cool is that I can broadcast it, so if you come to a gig that I’m doing as a remixer, you can dial in on your smartphone or your computer and download what I’m doing. So on Th Btchrs Bll record, what I’m doing is you will be able to download not just the stems like a normal remix record, you’ll be able to download all of the pieces so that you can take a song and remix your own live version with the pieces that I give you. It’s called remix decks. It’s becoming really popular. It’s like making music out of music. Like putting a mirror against a mirror, just endless. It’s really exciting. I love it. We live in a really great time.

What are some of the tools or technology that you use in the live setting to achieve this?
I used to have an MPC [Music Production Controller], but now I’m using Machine, also by Native Instruments. It allows it to also be a midi-keyboard so you can use it as a synth, you can sample your voice or whatever. And then it’s software-based, so it allows you to have it here [points to computer screen] and that way you can see what you’re doing. In dubstep and electronic music you’re using a lot of synths and stuff like that: wobbles, growls, LFOs [low frequency oscillators], performance oscillators. With Machine and programs like Massive and FM8, this is where it becomes literally engineering. You are engineering sound. You’re taking oscillators, frequencies and different things and then manipulating them by adding distortion, delay, reverb, modulation effects or whatever to the point where I’m making from scratch things that came from literally nothing. For me, it’s pretty much adapt or die. This is the way things are going, at least in this genre of electronic-based music. What I like to do is to make the technology an instrument.

Do you think you look at electronic music different than someone who doesn’t have a rock band background?
Probably, I think that’s a safe assumption. I look at electronic music as the future and a new frontier. But it doesn’t have to fulfill the stigma that I think it gets where it’s like, “Oh well it’s in the computer so it’s just so easy, anybody can do it.” That’s bullshit.

Now that you’re back “behind the decks” so to say, DJing and remixing whatnot, it’s sort of come full circle for you in a weird way. From the outside looking in, you’ve had a pretty crazy life. Do you ever think about that sort of stuff?
Sometimes you’re in your own bubble. I’m like any other artist, I’m really hard on myself and I get really down on myself sometimes like, “I suck, this sucks, I hate this, that sounds like shit!” Then sometimes I kind of have to shake my head and go, “Oh yeah, I’ve never had to do anything else but music, this is pretty cool.” The one thing I always try to remind myself as hard as it is, because, you know, the music business can be pretty fickle… But then I start to think that I wouldn’t have been able to do this this long if I sucked. I’m not that good of an actor. There’s no way I could have faked it this long. Or, I should just get an Oscar. I just love making music, I can’t help it. 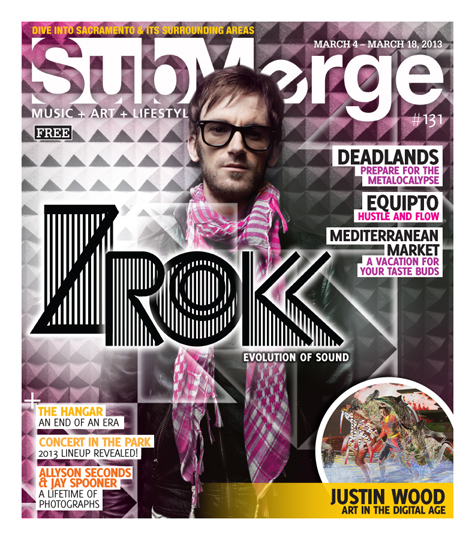 Th Btchrs Bll by Z Rokk will be available in late March via digital label Authentik Artists. Keep an eye out at Zrokk.com or Facebook.com/zrokkmusic for more information. Catch Z Rokk DJing and remixing live on Wednesday nights at Dive Bar, Thursday nights at R15 and Saturday nights at K Bar. You can also see Z Rokk at Concerts in the Park on July 19.