Cedric Bixler-Zavala has more inspiration than ever for his new project, ZAVALAZ

Known for his eccentric on-stage behavior, vocalist Cedric Bixler-Zavala has spent the last two decades somersaulting across stages all over the world, swinging his microphone around like it was some sort a circus act before diving into crowds of fans willing to catch him.

In case you need a crash course: Bixler-Zavala first became known as part of influential post-hardcore band At the Drive-In and more recently with prog-rockers The Mars Volta. Quite simply put, he is post-rock royalty, though in Bixler-Zavala’s newest project, ZAVALAZ (which will tour through Sacramento and hit Ace of Spades on Saturday, June 22, 2013), you can expect a much mellower performer to take the stage. Maybe it’s the fact that he’ll have a guitar strapped on, which rarely happened even way back in his ATDI days, maybe it’s because he just had twin sons. Either way, Bixler-Zavala made it very apparent in his recent interview with Submerge that he is happy with where he’s at in life and with where this band’s new softer, more “sparse” material is heading.

“Whether it be married life or whether it be having twins, maybe a little bit of both, it just gave me more confidence,” he said of the new stripped down songs. “I started writing more acoustic material and my wife would just constantly say, ‘You need to do that, I love when you do that, it’s just you and your voice and a guitar.’ I hadn’t really picked up the guitar for 10, 15 years maybe, and I just kept getting these votes of confidence from my wife.”

Eventually Bixler-Zavala started adding drums, bass and more and more layers and with them, more permanent members into the band. The lineup currently consists of fellow Mars Volta bandmate Juan Alderete de la Peña on bass/vocals, Dan Elkan (of Nevada City’s indie band Them Hills) on guitar/vocals, Greg Rogove on drums/vocals with Bixler-Zavala on guitar/lead vocals. “Everyone sort of takes the hit together to start from scratch and make a band,” he said. “It’s been a really beautiful process. It’s a great and amazing growing pain.”

In the following interview, Bixler-Zavala discusses with Submerge putting together a new band with a new sound, how he asked the universe for twins and got them and how having those twins will affect his creative output for the rest of his life.

When it came time to take your solo work and form a band, was it easy to piece together the different individuals? Is this the group of guys you had in mind or did it just sort of fall into place this way?
Kind of half and half, you know? Some of the people that played on the record couldn’t really commit because some people had kids, some people had other bands. The core of the group ended up being Greg, Juan and then Dan, who I met when Hella opened up for this Mars Volta tour we did a long time ago.

Yeah I wanted to ask about Dan, because he is in a really great band from the greater Sacramento area called Them Hills. So you first met him back in the Hella days when Dan was playing with that group?
Yeah and I kept in touch sort of sporadically here and there. He was down to take the hit and be a member of the band. One of the main important things was that everyone that was playing on it was really chiming in artistically and had such amazing things to say songwriting-wise. I loved taking the criticism, and I loved taking the direction and it was just wonderful. It’s been this amazing experience to get to learn from these people, because in this band I play guitar predominantly.

Which is still kind of a new thing for you, right?
Yeah, I mean I always did it behind the scenes but never for more than a couple of songs, you know? I’m trying to understand what even tuning is [laughs]. My approach is so make-it-up-as-you-go-along, I think that’s what the guys like. I come in the other day and I’m just like, “I discovered a thing called a capo.”

Details are very sparse about ZAVALAZ and as of now the public hasn’t heard any songs. There’s this sort of shroud of mystery surrounding the band. What can you tell me about the new music? How would you describe the sound?
Well, there was this guy that always used to open up for Mars Volta shows who is a predominant fixture at Low End Theory, a popular electronic thing over here. He has this amazing taste in late ‘60s and ‘70s sort of AM and psychedelia stuff. Mellow, mellow stuff. I’ve always liked stuff like that. Like when I listen to Roky Erickson, I love his rock stuff, but I love more of the ballad stuff. Anytime I’ve played a show with any of the other bands I’ve played in, what I listen to afterwards is lots of super corny, fucking bittersweet ballads. I love that shit. So that’s just what I would start writing…
They are just love songs that I made for my wife. I’m at a point in my life where it’s probably the biggest revolution I could ever do. Especially because I’m just known for one thing. It’s acoustic-based stuff, some of it is rock, but it’s got a very soft touch. It’s just kind of me going back in time and taking cues from my parents’ music and remembering that I actually did love that stuff.

It sounds like this style of music has always been in you, but it’s just getting pulled out more now for one reason or another. That’s got to feel fresh, right?
Yeah, it does. It’s nice to sing songs that are really sparse, open and very direct in the message and to sort of exercise my personal taste in I guess what you’d call Americana. I’m sure a bunch of Americana snobs would be like, “This is not that” [laughs].

How have the songs that started as a solo project changed since bringing in the other guys? It sounds like you’re really open to their influence on the songs?
Yeah, I just started implementing a lot of what their input was. Just sort of getting it down to the core of the song and making an entire album that is really song-based. I’ve spent 10 years being known as the guy that’s part of a band that does 30-minute songs. After 10 years, that gets a little old.

Are the majority of the songs on the ZAVALAZ album on the shorter side?
Four minutes and under.

I’ve seen you perform live many times and one thing I always loved was your crazy stage antics. With this new project you’ll have a guitar strapped on. Can people expect a more mellow Cedric on stage?
I think there will be plenty of other frontmen that can do that and that have borrowed from me, because I borrowed from a lot of other frontmen. They can take it and run. I’ve done it for years. That’s not to say I’m not going to have moments when I put my guitar down and dance still. But right now I really want to embrace playing and get all my mistakes out.

Congratulations on your recent twin baby boys, by the way! Do you think having kids has changed your creative drive? How do you see it affecting your music from here on out?
I think I’ll have more to choose from song-wise. They were born premature. They came out C-section. The nurse in the intensive unit said one of the best things you can do, which is funny because I was naturally doing it already, is sing to your kids. I still sing to them to this day. I record everything because I just love to make stuff up on the spot. It’s made me really identify capturing the moment and writing it down. There isn’t a day that goes by that I don’t get really overcome with emotions just being around them. They just bring out this indescribable feeling inside me. They really respond to singing. One of them had to come home earlier than the other, and the other wasn’t doing really well in the hospital, so I went in the middle of the night and sang to him for a long time. The next day he came home. Then the next day, my Dad sent me an article from some medical magazine saying live music and singing to your kids is really good for their heart and their stress level. I was like, “Yeah, you don’t got to tell me.” Then Juan sent me the same article being like, “Keep singing to them!”

That’s an amazing story!
They just stare at me, you know? If they’re really fussy it calms them down a lot to sing. They are actually kind of Grateful Dead fans. Anytime I play “China Doll” or anything from American Beauty they get really calm. The most rambunctious they get is when I listen to any kind of Rolling Stones. That’s when they would kick the most before they were born. We just knew they’d love rock n’ roll. One of them just screamed the other day, this intense loud bald-eagle-type-scream, and I thought like, “Did I hurt him somehow?” I just looked at him, and he had this smile on his face, like, “Oh! I can do that?”

It sounds like you have a couple little lead singers on your hands?
They have their little attitude already. Anytime they cry or get fussy I just laugh and think about how wonderful it is. Our story goes really, really deep with wanting to have kids. Long story short, you put something in the universe, you ask for it and you get it back. I did that in a song and I played the song for my wife. She cried, and then the next day we conceived. We went on this really late honeymoon, and she was really sick and it was really hard for her. Then the next day we come back from the honeymoon, she goes to the doctor, I had to go to rehearsal. She calls me and is like, “The fucking song worked.” I realized that I had put in a phrase asking for twins in this metaphorical way and she was just like, “The fucking song worked!” I just laughed. I laughed because it’s what I asked for from the universe. Not one day goes by where I feel stressed by them because it’s such a beautiful, amazing thing.

Where do you see ZAVALAZ one year from now? What’s your overall vision for this project?
I just really want to be a fully functional band and get back in the saddle, to sort of show this other aspect. I’ve always had people ask me why this band broke up, or why that band broke up. It’s always been the simplest answer: that I would never want my tombstone to be just one color. So now I really have this whole new sort of gust of wind to show the other color that I think people have sparsely seen, but now it’s really going to be a full color. I see the band really going for it and sort of embracing how uncool pop music can be in a certain kind of acoustic and softer setting.

Don’t miss Cedric Bixler-Zavala’s new band, ZAVALAZ, when they hit Ace of Spades in downtown Sacramento on Saturday, June 22, 2013. Tickets are available for $15 at Aceofspadessac.com or at Dimple Records, The Beat and Armadillo Music. Doors open at 8 p.m. and all ages are welcome. 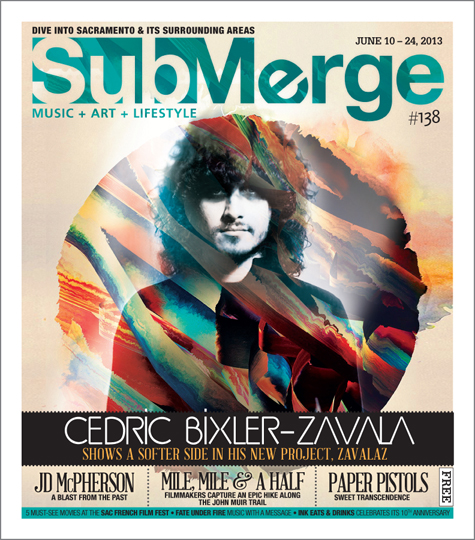