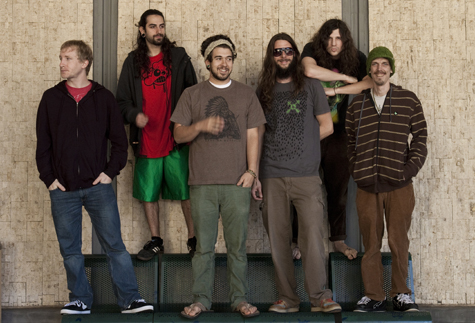 A New Album, A New Leaf

Since 2007 ZuhG has been representing Sacramento with its groove-funk style and earth-centric liberal aesthetic. They play a bit of blues, a bit of jazz and a bit of psychedelic rock. They mix hip-hop and saxophones, flutes and Rastafarian herbal idolatry. Yet, despite the multiple influences and wide range of instrumentation, ZuhG is able to sound crisp and precise. The songs on the bands upcoming CD Free Love are well produced, the bass lays in the pocket with the drums, it shifts in and out of blues guitar movements and references other standards like “Footprints.” On a musical level the group invokes a wide variety of influences, all courtesy of the guitar work of JR Halliday and Bryan Nichols, the drum work of Matt Klee, the beatbox-flow of Charlie Wheeler, and saxophone melodies from Jake Gleason. Bianca Wright holds down the luscious background vocals. All of these performers create movements that build, ebb and hit in syncopation under the optimistic experiential vocals and lyrics of Nichols.

Through multiple incarnations, ZuhG has pushed forward and with a backbone of Nichols and Klee, they’ve found a level of success, a degree of professionalism–dare we call it such–that enables the members to identify themselves firstly as musicians, secondly as anything else.

Curiously enough the group collectively (with a few friends) operates ZuhG Life, a store inside of Downtown Plaza where everything sells on consignment, and the music culture of Sacramento holds some 1,000 square feet of retail space in a largely corporate environment. Submerge was able to catch up with Nichols and discuss the upcoming album, the storefront, the popular pastime of parking-lot camping, optimism and the ever fashionable burrito windshield.

Tell me about the ZuhG Life store, how did that come about?
It’s a local music store basically. All one wall is CDs, and we’ve got local band T-shirts as well. I was booking live shows for the mall, and I needed to get paid in advance for a road trip to Oregon. When I went to get paid they brought me up to this empty store. I thought they were going to fire me, but they asked, “Hey you want to open some kind of music store?” And we just did it. The stores helped us get a lot of recognition. We’re on the news and stuff. Sometimes people think we’re called ZuhG Life, I’ve seen it on flyers. That’s funny.

Did you have any retail experience? How was that transition into owning your own shop?
I don’t really have any experience. I worked at Surf & Skate, and I hated it. I had to follow the customers around the store. The owner was all on me about it. Even when it was obvious that people just wanted to look around.

ZuhG has to be one of weirdest names I’ve ever heard for a band. How’d you decide on that?
ZuhG means to be unlike others, and to do something different. I think it’s German. I found it in a Rolling Stone ad. I turned it in for a homework assignment. I asked my teacher, after we’d been playing, “Hey I named my band that, do you think I could get that ad back?” But he said it was a really good example and he wanted to keep it. At the time I was like cool, I’ll just pick up another Rolling Stone, but I never did. I’ve never seen it since. My friend has searched countless dictionaries, and she’s never found the word.

What’s the craziest thing that’s happened to you on stage?
I caught on fire at Northstar ski resort. They always have these little propane heaters on stage. The back of my shirt caught on the little flame, and I started patting myself out when I realized I was on fire. Then JR comes over and tries to pat me down. We’re playing at the foot of this ice skating rink and everyone is watching by now. JR couldn’t put me out either, so I threw my guitar down and literally stopped-dropped-and-rolled right in the middle of the stage. It went out. The whole back of my shirt was gone. I have one little scar. It was bad at first but it healed fine.

Did you finish the set?
Yeah, we played three more songs. I think more people checked us out that day than ever.

That’s flaming! You got any other cool road stories?
We don’t ever get hotels because that would be all our gig money. Every night on the road we try to find some friends or get someone to let us sleep at their house. Sometimes we don’t get so lucky. Once in Ventura we played a shitty show, no one was there, so we just slept in the parking lot. There was this big rundown bus in the parking lot so we just pulled our cars next to it. Random [Abilideze] was with us. He was pissed that night. Six people were sleeping in the van, which is ridiculous because it only sleeps three comfortably. Dudes were sleeping in the front seat of the van. I have a little tent and I posted it up right on the concrete. Jake, our sax player, was sleeping on a cot right outside. Our roadie was sleeping in the trailer. That was fun.

You hear about bands that hate each other when they’re in the van, but when they get on stage they have amazing shows. Does that describe ZuhG, or do you get along all the time?
We bitch at each other for sure. There’s definitely some hissy fits out there. Usually whoever is pissed will just play with a ton of energy on stage that night. One time after a show in Oregon at like 3 in the morning, we stopped at a Taco Bell, and we didn’t hear our drunk bass player say he wanted a taco, so he walked out of the van. He went and sat on a curb in the parking lot. When we got up to the window we ordered him a taco and a burrito, because we forgot. I went over to our bass player. I said, “Here’s a burrito, sorry we forgot.” He grabbed the burrito and walked over to the van and threw it hella hard at the windshield. There was a whole fight in the parking lot. The Taco Bell people started calling the cops. It was hilarious. Stuff like that happens every once in a while.

Do you have any thoughts on the recent tsunami in Japan?
I was thinking of throwing a big benefit show at the ZuhG Life store to raise some money we could send over there. I want to do something to help.
Â
If you turned into a human-instrument mutant because of Japanese radiation that had made it over to Sacramento via the Pacific winds, what instrument would you prefer to be combined with?
My right arm would be a melodica, my left arm would be the neck of a guitar, my upper torso would be the body of a guitar, my right leg would be a high hat, my left leg would be a rain stick. That way if I did a handstand I could work that noise out. My head would be a djembe, and all my fingers would be kazoos! This would be a cool painting; one rad man band.

How often does ZuhG go skinny dipping together?
Ha! Never. I don’t want to see these guys naked. We do bathe in the ocean and rivers often when we’re on the road, but not naked.

Why are you such an optimist in such trying times?
In our song “New Shoes (Hippy Feet),” the hook of the first part of the song is “I’m feeling so good, I’m alive today/I’m feeling so good, and I can’t complain.” Living the ZuhG Life makes me happy, might as well be positive and peaceful. Life’s too short to be so serious. There’s no point in being pissed off all the time or pessimistic. I get stressed out every once in a while with everything that’s going on, but I love everything I’m doing, so it works out.

You sing a lot about the environment, wouldn’t it be better for the earth if ZuhG hitchhiked when you all went on the road?
Our mechanic friend, Ryan Casey, is looking for a diesel for us that we can covert to run off veggie oil. Then we’ll be green and smell like French fries all the time, but it’ll be worth it.

Theodor Adorno hated Jazz because he said the fans and musicians who thought it deviated from moreÂ traditional song structuresÂ failed to realize that it always maintained a relative steady beat, and therefore they were pretty much just hipsters–in so many words. Why do you hate jazz so much?
I love Jazz! What’s a hipster? People always say that about people but I don’t get it. Am I one? 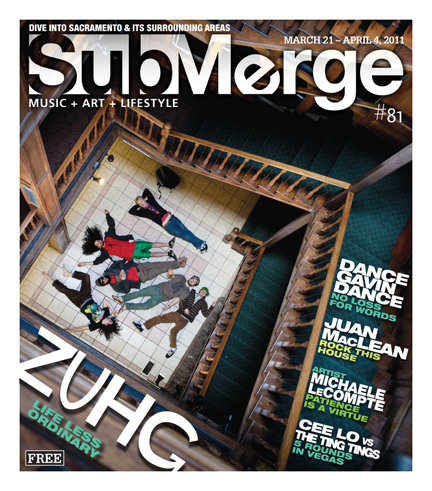 ZuhG’s CD release show will take place at Beatnick Studios on April 9, 2011. The band will also play an Earth Day show on April 13 at Sierra College in Rocklin.