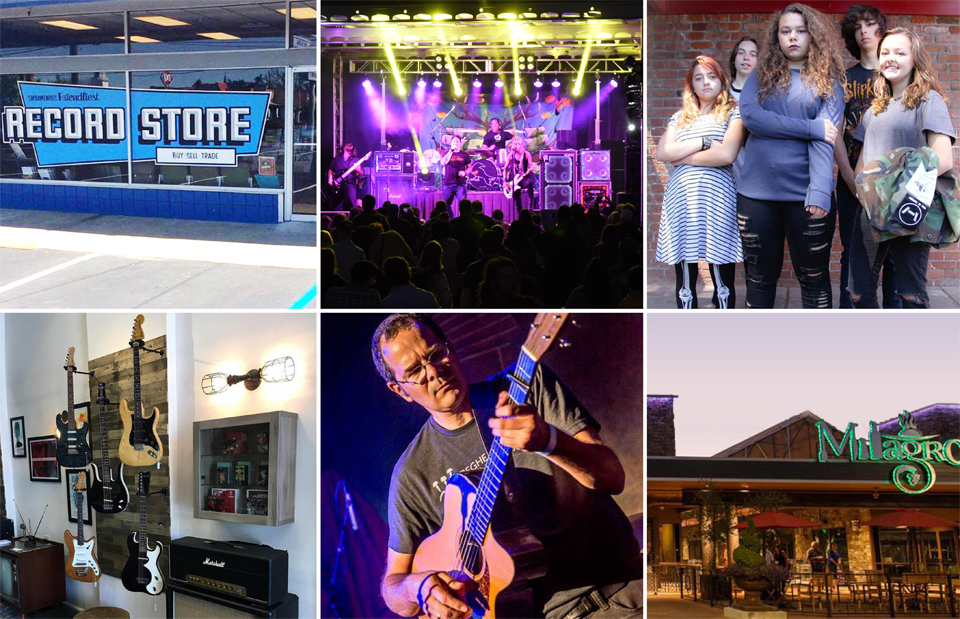 Beloved local record store Phono Select, known for their vast selection of new and used vinyl, is now open every day from noon to 6 p.m. at their new location: 2475 Fruitridge Road in Sacramento. Stop in, do some shopping and help keep rad local music stores alive and well!

Speaking of music shops, local chain Dimple Records is going through some changes. They recently closed down their Elk Grove location (which was open for 13 years!) and are planning on expanding their book-selling empire by opening up another spot on Broadway.

While we’re on the R Street tip, three restaurants in the area have recently closed their doors: Nido, Roxie Deli and Dos Coyotes Border Cafe have all recently closed up shop near 15th and R streets. The owners of Nido will still keep their other popular spots open, Magpie and Yellowbill Cafe Bakery (thank freaking god!), plus Roxie and Dos both still have their other locations open as well.

Local grassroots music and art event First Festival is asking for support from the community to help make next year’s festival free to attend! First Fest’s third annual event, which just happened in West Sacramento in May, was a huge success. If FF founder Danielle Vincent can pre-raise enough funds to cover the event’s extensive costs, next year’s festival will be totally free for music lovers of all ages. Visit Firstfestivalsacramento.com to donate and get perks! Campaign ends July 28.

Organizers of the highly anticipated Wide Open Walls street art festival, which will go down across the Sacramento region from Aug. 10–20, have begun announcing their participating muralists, and the list is pretty damn impressive. They’ve already revealed around 30 artists hailing from this region and beyond, with more to be added soon. Check out more at at Wow916.com.

The first-ever Winters Guitar Festival is set for June 23 and 24 and will celebrate all things acoustic guitars with more than two dozen luthiers (master builders of stringed instruments) on hand, as well as classes, demonstrations and performances from a number of guitar virtuosos like San Francisco’s Teja Gerken. Hit up Wintersguitarfest.com in advance to snag a $35 two-day pass and to see a schedule.

Back in early April, a nasty thunderstorm forced the postponement of UnderRage Music Fest. Never fear, a new date is here! The event has been rescheduled for Saturday, June 17 at Sacramento Rehearsal Studios (5749 88th Street). It’s a free show, all ages are welcome and there will be performances from more than a dozen of the area’s most promising young bands. Check Facebook.com/underragemf for more info.

If you haven’t checked out Milagro Centre in Carmichael yet, we highly suggest you do. It’s pretty amazing having a bunch of legit eateries in one location: River City Brewing Co., Mesa Mercado (from Ernesto Delgado of Mayahuel and La Cosecha), Fish Face Poke Bar (from chef Billy Ngo of Kru), Insight Coffee, plus a couple dessert options and the soon-to-be-opened spot from local restaurateur Chris Jarosz, The Patriot.

Celebrate the best of the best of the local music scene at SN&R’s 25th Annual SAMMIES at Ace of Spades on Thursday, June 15. In addition to the numerous awards being handed out, the show—booked in collaboration with Jerry Perry Presents—will also feature performances by Jonah Matranga, Las Pesadillas, The Brodys and many others.