A Swill of Rights: Part II 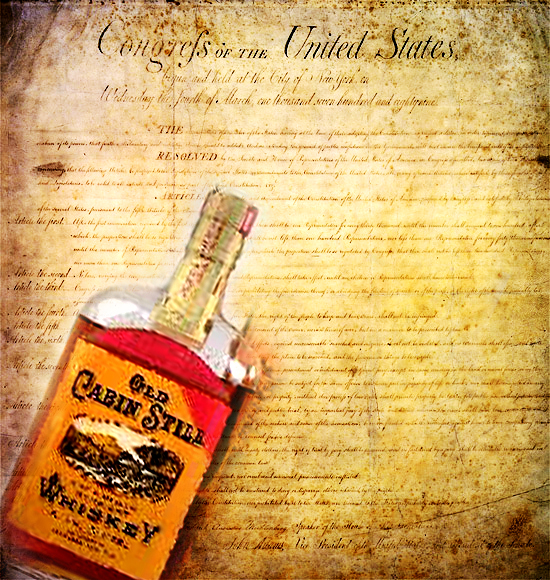 As we wrap up the month of everything ‘Merica, I continue my in-depth look at the creation of the Bill of Rights. Last time I covered the drunken debauchery that went into our first five amendments to the Constitution. I discussed how our forefathers were a “spirited” bunch who drank as hard as they worked. Somehow, despite their self-pickling, they managed to create five pretty damn important rights. After completing such a monumental task, it was no surprise that the boys needed a little break.

A few months vacationing on the shores of New Jersey (hey, this was the late 1700s) brought much needed relief for our motley crew; unfortunately, it also brought civil unrest. Men, women and children of all colors were being hung in the streets without trial. No witnesses testified and no lawyers were present. Team America, err… the forefathers cut their vacations short and rushed back to Pennsylvania before more innocent lives were lost. With the Sixth Amendment, they announced these hangings were over; they were back to work”¦ and back on the bottle (giving us the term, hangover).

The gang was feeling pretty good about themselves. Disaster had been avoided and all would have trials; however, one thing that hadn’t been decided was how these trials would work. The discussion was heated and soon turned to puffery. Men began challenging each other to a test of manhood; of course, these being the forefathers, the test was a drink-off. Once snookered, the details of the arguments were lost. All that remained were nebulous concepts and even those took 12 men to patch together. It was decided that a trial by jury would alleviate the pressure from any individual decision-maker who decided to drink during the trial. Thus the Seventh Amendment was written with the idea that even two drunken heads were better than one.

The drink-off left some so inebriated that they slept on the tavern tables. Fountain pens appeared and soon many had large penises drawn on their faces. The chiefings left them humiliated and they swore it would never happen again. The Eighth Amendment put a stop to such “cruel and unusual” punishment in addition to prohibiting excessive fines. The latter prohibition was the work of a few of the victims who also awoke with empty wallets.

By the Ninth Amendment, it was evident that the group was quickly becoming a bunch of degenerates. Calls for further protections came from the “Chieftains,” as they were now known. The Chieftains worried that the others would use their high tolerance for alcohol to further expand the powers of the government while others lay incapacitated nearby. The Chieftains wanted a ban on humiliating the drunk and incapacitated, but the others still wanted their fun. A compromise was reached and the Ninth Amendment was enacted to protect rights not specifically found in the Bill of Rights.

Looking back on all they had accomplished, the forefathers couldn’t help but want to share this with others. What had started out as laying the groundwork for freedom had become the world’s greatest gentlemen’s club. They believed the federal government shouldn’t be able to hog all the fun and it was decided that the states could throw their own mini-constitution drafting parties. Not being fools, the forefathers managed to build in some protection for their hard work. The states could create rights, but the federal law reigned supreme where it applied. The party fever set off by the 10th Amendment helped create this great country that we know today.

At the time, the Bill of Rights set America apart from every other country in the world. The forefathers had managed to outline the idea of freedom in a new and exciting way. Through those amendments, they told the story of a young country, hooked on the bottle, but happy that they had that choice. And as we close out the month of July, remember loyal readers, it is choice that sets us apart and makes us free.