A Time When Only Pasta Mattered 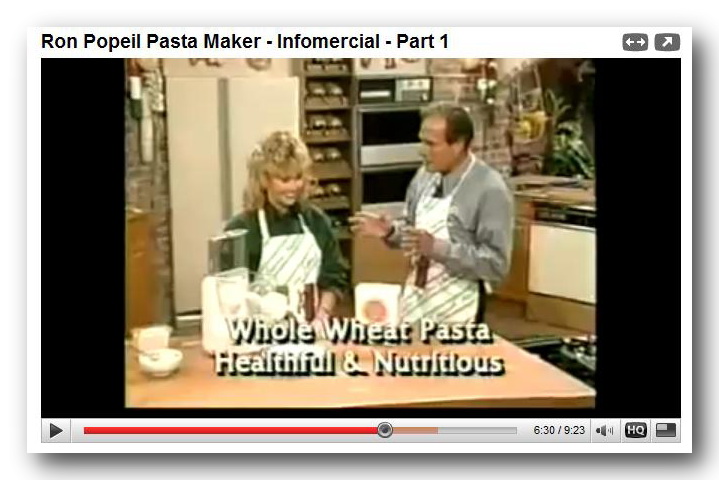 It was the early 1990s and I was a weird child. On most weekends, my friend would spend the night or I would stay at his house. We weren’t into drugs or drinking in those days and were more likely to be hopped up on sugar and caffeine than anything else. We’d sneak out late at night after our parents had gone to sleep to egg peoples’ houses or toilet paper their trees and generally cause mischief around our neighborhoods. When we got home we’d turn to television, specifically late night infomercials, to help wind down for the night.

For those not alive or old enough to be awake at 2 a.m. prior to the year 2000, you may not be aware of the wonderful world of infomercials or their heyday in the 1990s. An infomercial is basically an extra long commercial for a product or service that someone claims will change your life and wants to sell to you for dirt cheap. On the best infomercials, the acting was bad, the statements were outrageous, the audience was incredulous and the products were ridiculous. It was one of the greatest times in television history, and my friend and I were there to witness it all.

Back in those days, the cable and local networks would run out of content by 1 a.m., so they’d turn things over to people to hawk their inventions through the wee hours of the morning. The types of products available ran the gamut from car paint repair kits to shoe odor removal to sandwich makers and Ginsu knives. Some were clearly gimmicks and other seemed to be magic in action, but most paled in comparison to the inventions created by one man: Ron Popeil.

Ron stood over the rest in the world of infomercials, and no one could top him, which was actually a good thing because they might wipe off some of his fake spray hair and stain their clothes. Ron was more than just a pitchman or an inventor; he was a god among men. Billy Mays and the Sham-wow guy were but flecks of powder spray hair on Ron’s collar, waiting to be brushed away at any moment.

Ron has probably invented and marketed more things than Thomas Edison, but unlike Edison, no one has ever accused Ron of stealing their idea. In addition to the aforementioned spray hair in a can, Ron (through his company, Ronco) was also responsible for a food dehydrator, Dial-O-Matic Food Slicer, bagel cutter, inflatable car door saver, smokeless ashtray and the Popeil Pocket Fisherman, which I think we can all agree will come in handy when the ice caps melt and we are all living in boats. That’s just a handful of the countless number of other products sold by Ronco that changed the world and made for interesting and dynamic late night television.

Ron’s infomercials were always a pleasure to watch, but my friend and I had a favorite: the Popeil Pasta Maker. It was all so simple. As Ron would explain over and over, even an idiot could use this pasta maker. He’d then go on to prove it by allowing several idiots from the audience to take a crack at making pasta in the later portion of the show. After hearing the brief interviews with each of the lucky audience pasta chefs that followed, Ron certainly had me convinced; even an idiot can use this machine.

Terry Scott from Kewanee, Illinois, was one of those lucky idiots. He got to make “Cajun flavored” linguini, which is not something people eat. When asked what he thought about the pasta, he said that he had made it himself and couldn’t believe it. From the look of pure amazement on his face, I could tell he was being sincere. Never before had dumping something into something else, hitting a switch and boiling water led to a heartier or delicious meal than it did for Terry that day. He was a Popeil Pasta Maker convert, and so was I.

Then there was Ron’s co-host, Nancy. I think it’s safe to say that Nancy was born to host infomercials. She is maybe the most naïve, least intelligent person ever to grace a television screen. She could find amazement in the simplest of things. The Pasta Maker has a piece of plastic attached to the extruder to cut the pasta free with as it is pushed out of the machine. When shown this feature, Nancy was truly gobsmacked. She couldn’t believe that Ron would build in a way to slice off the pasta. She was so dumb that there are a few moments during the infomercial when Ron looks like he is ready to kill Nancy and it’s hilarious.

You can still watch the Popeil Pasta Maker infomercial on YouTube and you should. The video quality is shit, but just pretend it’s an Instagram filter or something. The content is where the gold is. I’ve been mining the Popeil Pasta Maker infomercial for years and it still pays off every time. I never ended up buying the pasta maker because I couldn’t see myself making pasta that often. What I did buy into was the dream being sold by one Ron Popeil, and it’s a dream I’m still happy to relive more than 25 years later.