An Evening of Glenn Beck (Is All I Can Take) 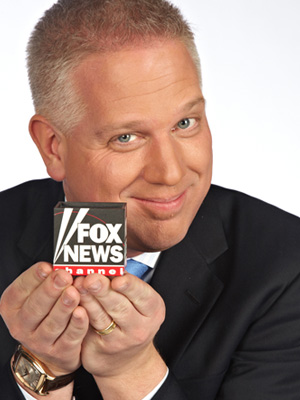 The things I do for your entertainment. Normally, it’s not so bad, but this was horrid. At 11:00 p.m. on Sept. 29, I watched the Glenn Beck Program on Fox News—the entire excruciating hour. Like Beck himself, I rode a serious emotional rollercoaster. I laughed, I cried—it was soooo worse than Cats (albeit a bit more theatrical). In the end, it sapped my strength and left me exhausted for a full day afterward. Basically, what I’m trying to say is, you owe me big time.

One thing is for sure, it’s not as much fun as Beck has when he plays clips on the show. His face remains visible during all clips even if he isn’t going to talk. I’ve determined that the sole purpose of this is to allow Beck to make faces at the clips like a 4-year-old. After all, that’s what he is: an overgrown 4-year-old with his own radio and TV shows. On this night’s episode of Baby’s Day Out, the topics included liberal media lefties, education, Iran, the Fox News-sponsored “spontaneous” tea parties, the television show Gunsmoke (Gunsmoke?), the recent gang fight in Chicago, and the United States’ bid for the 2016 Summer Olympics. But before we get started, Beck wants to let the world know that he is unhappy with his lead-in graphics. The image just isn’t jiving with his plan to re-found America. It’s never explained why he waited until they were on the air to bring up this minor detail, but it is jarring enough to get your attention.

Once he has your attention, he lets you know that the liberal media lefties are out to ruin us all. They aren’t reporting on domestic terrorism! All they ever talk about is the economy and healthcare. What about DOMESTIC TERRORISM? Oh and guess what else?!? They are a bunch of liar faces, just like the government (who, by the way, are going to make you get a mandatory swine flu shot even though it’s largely untested).

And speaking of the government, they need to stop giving us stuff so our “childrens” can have more later. “We would all learn to do with less, to do with nothing, quite frankly, learn to sew our own clothes, never get any new clothes, just, uh, can our own food, work out in the yard, take a bus to work, if we needed to, just to have our kids have the opportunity to have the freedom to succeed and fail that this country has always offered its citizens.” Go ahead and read that a few times. I’m not sure exactly how this would be a good thing, but Beck is adamant that it is our path to salvation.

The remainder of the show is spent explaining how right Beck and Fox News are and how wrong everyone else is. Over the course of one hour, Beck manages to portray himself as a victim, a warrior, an innocent bystander and a simple messenger. He impersonates, makes faces and does his own sound effects while he vilifies his opponents; and he pats himself on the back when it’s done. It would almost be funny if he weren’t being serious; and therein lies the problem. Beck has enchanted the dimwit population of this society, and they may just be stupid enough to start a war—even without the government’s help. Perhaps they should heed the words of their own prophet, Glenn Beck, who said, “You can’t believe what you read or see on TV anymore.”