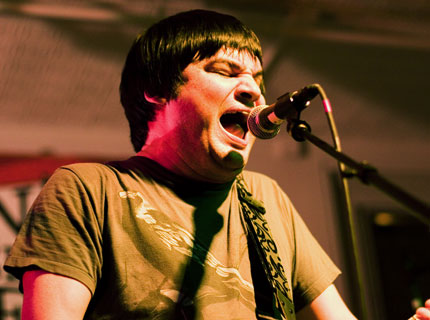 The above title is probably only of interest to you if you’re a Spin employee. But the music magazine thought it was newsworthy enough to alert the press and public at large about the event. Maybe they want us to know how cool it is to work there. Or maybe they’re just bragging.

I suppose I’m not being fair. If I had an office, I’d love to christen it by having a band play, and if that band was Trail of Dead, I’d probably want to brag about it too. According to the review posted on Spin.com, the Austin-based rock bandÃ‚Â  “literally roused the neighbors with their ear-splitting volume.” From what I’ve heard of the Trail of Dead’s live shows, I don’t doubt that such hyperbole was warranted. So congrats, Spin employees, for opening your new office in style, and for also having a job in publishing. There’s not a lot of people who can say that these days.

Of broader interest, Trail of Dead is coming out with a new album. The Century of Self is due out next Tuesday, Feb. 17, and you can stream the whole thing at AOLSpinner.com.