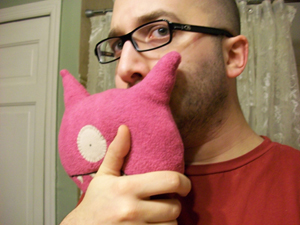 When I was in elementary school, students would come to school with valentines for other students. Usually, they were single-fold pieces of cardstock filled out by the student’s parent. I received a fair share, but only from girls who’d brought in cards for the entire class. When I entered high school, valentines (fake roses) could be sent from one student to another for $1. By then, though, my valentine well had run dry. There were no more well-meaning little girls with well-meaning parents who were looking to spread cheer and love to everyone in the classroom. All that were left were selfish, stuck-up bitches who valued looks above all else and were too shallow to realize that the dude who would eat his lunch in the library so he could avoid the public hazing of his peers and read Anne Rice and Tolkien novels had much more to offer than any of the so-called “popular” kids.

I’m not bitter. I’m just saying. I never got a flower in my four years of high school. Whatever valentines I’ve received since elementary school have come from my mom (I love you, Happy Valentine’s Day), and I’m OK with that. I’ve never held anything against the holiday, because it’s just a day, and it’s not its fault that I was a creepy kid with bad hair in high school.

In recent years, it’s become fashionable to hate Valentine’s Day. I imagine the new tradition was born out of a growing sentiment in the counterculture that the minor holiday had become too commercialized, and existed only as a vehicle for corporations like Hallmark to sell more cards, candies and useless trinkets to signify one’s affection for another. That’s all well and good. I don’t think buying someone a box of chocolates is necessary to show a person that you care about them, but it seems a lot nicer than pontificating about the inherent immorality of a free-market economy. It’s a lot tastier, too.

For some, it’s not enough to be miserable in silence and move on. That would be too easy, and they wouldn’t be able to broadcast how edgy they are. Instead they’ve created “anti-Valentine’s Day” parties, which is the worst idea for a party theme I’ve ever heard. Why can’t you just dress up like “pimps and hos” like every other douchebag? What about pirates and ninjas? That’s fun. I’m not sure what goes on at one of these parties, because I’ve never gone to one. I hope I never sink that low. But I suspect they’re attended by lot of grumpy bitches who’ve been used up by life, so they get drunk enough to hook up with otherwise unfuckable dude-bros and everyone feels like shit about it in the morning. In other words, it’s probably just like any other day. I just hope you realize that by throwing an anti-Valentine’s Day party on Valentine’s Day, you’re actually celebrating Valentine’s Day. It’s ironic, but probably not in the way that you’d hoped.

Valentine’s Day only has as much power as you let it. If you want to celebrate it, have at it. Don’t say that you’re celebrating the fact that you don’t celebrate it (just thinking about that paradox makes my head hurt). Enjoy yourself. Take your guy or gal out to a dinner you can’t afford and make sweet loving until the sun comes up. Buy them a giant box of chocolates and get morbidly obese together. If you’re really in love, a few extra pounds won’t matter.