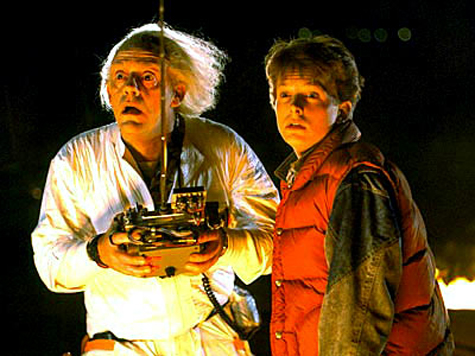 With less than three years to go, the future is almost here. Massive changes are on the horizon that will affect nearly every aspect of our daily lives, hopefully for the better. How do I know these changes will happen? Because, thanks to Hollywood, I’ve seen the future.

In 1989, my 9-year-old self watched breathlessly as Marty, the Doc and a soon to be unconscious Jennifer flew into the future. When they arrived to stop the meddlesome Griff from ruining Marty Jr.’s life, the display on DeLorean dashboard read Oct. 21, 2015.

Three years doesn’t give us much time; fortunately, we’ve already made some headway. Three promises from the future are here now. Like Marty Jr., we Americans love watching more than one TV channel at a time. Marty Sr. was a big fan of the videophone in 2015 and Skype and Facetime have brought this mostly unused novelty to the present. Finally, the CafÃ© ‘80s showed us that, in the future, Ronald Reagan would be used to shill Pepsi and hamburgers. While this one hasn’t quite happened yet, the Republicans almost unveiled a holographic Ronald Reagan at this year’s Convention in Tampa, Fla.

Clearly we are off to an excellent start, but what of all the future advances left to come? Much of what was shown to us in the film falls into two distinct categories. Our first chunk of future fantastic is going to come to us through the fashion world. Tired of buying clothes that just don’t seem to fit once we get them home, big timers in the fashion world, like next year’s Project Runway winner, will push the envelope and end this dilemma with the self adjusting (and self-drying) jacket.

Americans are constantly pushing the envelope, and by envelope, I mean the tensile strength of their pants. We are getting fatter and nothing in the film says that is going to change. In the future, not being able to see your feet over your fat gut may be common, but it won’t be a problem because we will have self-tying shoes. Lest you think laziness is our destiny, the professional male population of the world should take note that we will soon be required to wear two neckties. As a lawyer, I am not looking forward to this at all.

Of course, the future isn’t just for the clothes horses; 2015 has stuff for the tech geeks too. We were introduced to two future technologies right in the beginning of the film, and they are game changers. It may be hard to believe, but in just three short years we are going to have flying cars that are powered by fusion reactors that run off garbage. Not convinced that this will be the case? Take a drive down Highway 99 and see for yourself that the government is already tearing up all of these soon to be worthless roads.

Oddly enough, the future isn’t all about advancements. Some of our current and most relied-upon technologies seem to be absent in 2015. No mentions are made of the Internet, let alone silly cat videos, in the future. No doubt the Web will be eliminated soon to prevent hackers from taking over the world. But what of our cell phones? We can still get on the Internet from there, right? Unfortunately, I think the answer is no, as we see Marty Jr. using a pay phone in 2015, and there wasn’t one idiot yapping away on his cell phone in the CafÃ© ‘80s.

No Internet or cell phones means no emails or text messages and America’s grasp of the English language is already too far-gone to expect us to return to handwriting letters. With few options left, the future has gone way back into the past and dug up what is now considered a pretty worthless technology: the fax machine. Remember; put your document in face up if you want the recipient to be able to read it!

With only three years left, we have a lot of work to do. Some of these changes are here already and others really just require us to forget the advancements we’ve made already. But the real challenge lies in all of the things we haven’t invented yet and there is only one way those ideas will come to fruition. So think, McFly, think!