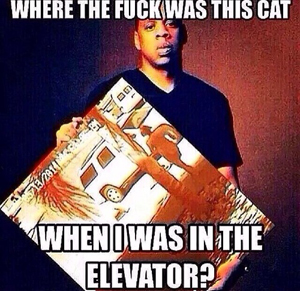 Did you feel the Earth stop for about four minutes on May 5th? That was the cosmos mourning Beyoncé as her world shattered. Bey’s sister, Solange, hates Jay Z and tried to open a can of whoop-ass on him in an elevator following a Met Gala afterparty. TMZ released a security video of the fracas and now Bey’s perfect world is no more. If you haven’t seen the video yet, then it’s time to cancel your CompuServe account and open your fucking eyes! This thing is everywhere!

To fuel the fire, the internet speculation hive mind is running at a rate that, if used for worthwhile purposes, would find a cure for cancer in about 3.6 seconds. The e-mob won’t stop until they have answers to their questions. Why doesn’t Bey stop Solange? Is Jay cheating on Bey? Is Bey cheating on Jay? Hey Bey Bey? Where did Solange learn to kick that high? How much is the bodyguard getting paid for putting up with this shit?

Whatever the pay, the bodyguard should be asking for more. After having to keep Solange at Bey bay for what turned out to likely be the longest elevator ride of his life, I’d say a contract renegotiation is definitely in order. Dude was octopus-like, holding Solange back while also collecting her shoes and purse from the floor. On top of all that, he still managed to run the elevator and keep the doors open or closed as was appropriate for the situation. It may have been the hardest four minutes of his career and he absolutely killed it.

For Solange, it looks like it might have been the angriest four minutes of her life. That finger was wagging at Hov before she even got through the elevator doors and she immediately started swinging wildly at him when they slid closed. If a dude as big as that bodyguard grabbed me from behind during a fight and said, “Don’t hit Mr. Carter,” I would probably listen. In her rage, Solange must have heard him say “Go ahead, kick harder,” so she did.

Her first pedal assault fired off high into Jay’s chest like she had been practicing with the Rockettes all winter. Her second kick was a bit more sinister. She really went for the gusto on that one. If you haven’t seen the video yet, after Solange windmill swings and high kicks Jay in the chest, she manages to land a side kick to his Rockafellas. It was one of the few hits that actually made Jay lose his cool and step at Solange.

Clearly he is upset, but the weird part is, Jigga seemed ready for it. In the footage, Jay’s hand is often down by his crotch with his fingers held together ready to slap away or grab a foot thrown in their general direction. It almost looks like this has happened before. As far as I can tell, Solange is not a known dick kicker, but who knows what happens in private. It does make me wonder if Jay Z is in an abusive relationship with his wife’s sister.

So, the story so far is Jay Z got kicked in the dick by his wife’s little sister in an elevator in New York City. No comments were made by the parties involved other than some passive aggressive Twitter posts. Beyoncé and Jay went to a New Jersey Nets game without incident. A week or so after the elevator incident, Hov and Solange were seen together at a jewelry store browsing for loot. No explanation was provided, but she was either buying him a gift to apologize or he was buying her something so she won’t kick him in the unit again. Either way it looks bad for Jay. This is the kind of shit that ends rap careers.

If there is anyone who knows about ending careers, it’s one Queen Beyoncé. Remember when she was in Destiny’s Child with Kelly Rowland and that other chick whose name you forgot because Beyoncé cut her loose? Michelle… something. Yet, she seemed to be the picture of calm in that elevator. She stayed above the fray, which is odd considering her husband and younger sister are fighting just inches away from her.

Where was Sasha Fierce? I kept waiting for her to throw up her arms and stun everyone into unconsciousness, but it never happened. No lasers came from her eyes or death rays from her fingers. Her gyrating booty did not cause anyone’s head to explode. In fact, she barely spoke and only moved when the spinning Solange/bodyguard Tasmanian devil came into contact with her.

Unfuckwithable. Beyoncé remained calm and poised in the eye of the storm. Not a hair looked out of place when the four of them finally exited the elevator to the snapping cameras of the paparazzi. This was not her first rodeo. Bey, apparently, don’t play that. She leaves that shit to the children.