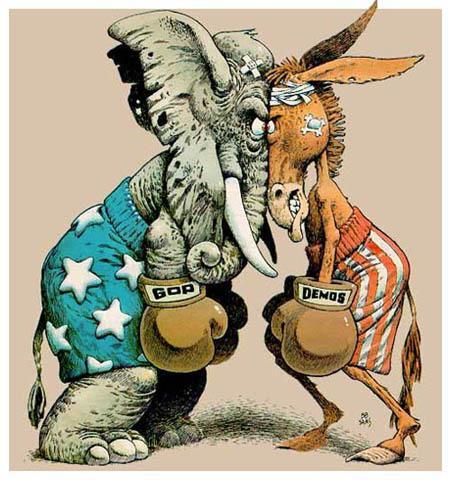 It’s that time again. Election season is back, and it’s tougher than ever. Shit is really fierce out there this year. The Tea Party is out crackin’ skulls and drinking the blood of their prey, while the Democrats are doing what they do best–which is to say, losing. Until now, the Republicans have mostly been riding the Tea Party’s dicks teabags coattails. But by the time this goes to press, the Republican members of the U.S. House of Representatives will have announced their 20-plus page “Pledge to America.”

This “pledge” is supposed to get the Republicans on everyone’s good side by “solving” all of our problems. If all goes according to plan, the people will love them by Nov. 2 and they will sweep the House, thus returning us to the dark ages of 2006. Being the investigative journalist that I am, I was able to get a hold of the GOP’s secret talking points on their “pledge.” These guys really mean business. Don’t believe me? Take a look for yourself.

On Job Creation
We need to protect our borders, and we have a lot of gun-lovers out there. Why not start paying them as border guards? Put that militia training to work, folks!

We love us a good war and wars mean jobs (unless you work in the body armor industry). Iran and North Korea are the obvious choices, but it doesn’t really matter who we fight. Maybe we will hit Mexico and show those border-jumping job stealers who we really are!

We are going to declare the Democratic Party to be Communist terrorists and encourage bounty hunting.

On Spending Reduction
First and foremost, we need Michael Steele on this. That guy is an economic genius. With Steele in place, we will fly out to a Puerto Rican resort where we will figure this whole thing out.

These liberal Washington fat cats have been ramming social programs down our throats for years. We’re getting rid of Medicare, Social Security and unemployment. It’s time these people started working for a living like real Americans!

Science is a loose cannon and our children are in its crosshairs. It’s also expensive to teach with all that crazy equipment. So, say goodbye to science. Teaching about the Lord is free!

Get rid of all those well-paid activist judges! We can judge ourselves!

On Health Care
We need to replace Obamacare with basically the same system we had before, except we want to regulate it less. Let consumers decide!

Goodbye, abortion. We’re not just talkin’ partial-birth abortion, either. If your uncle raped you and got you pregnant, well, that’s just part of God’s plan.

The gays get all the diseases that cost us a bundle. Let’s ban being gay. Problem solved.

We need a Constitutional amendment that bans death panels before they kill our grandparents. It’s just the right thing to do.

On National Security
Kill our enemies! Kill them good! Maybe bomb them a bunch and send in lots of troops!

Build a concrete wall around America. No one could ever get in… or out.

Those internment camps did wonders with the Japanese during World War II. Why not dust off that old chestnut to take care of our Arab problem?

Maybe bomb Russia just to show people we mean business. Didn’t see that one coming did you, comrade?

Congressional Reform
Congress is a mess, and we need to clean it up. There are way too many rules and procedures. We are going to get rid of these roadblocks (for us, not the Democrats) so we can get some stuff done!

Pork barrel spending is our lifeblood; it’s how we really get rich. Unfortunately, Americans are starting to reach for their pitchforks and torches, so we are going to need to polish this turd. We will make it a contest: The state with the most pork gets free guns.

All this voting is getting in the way of our campaigning. Since the lobbyists buy our votes anyway, why not just let them vote for us too? Let them figure it out. We got a campaign to run!

Sounds like a winner to me. Good luck this November, gentlemen!