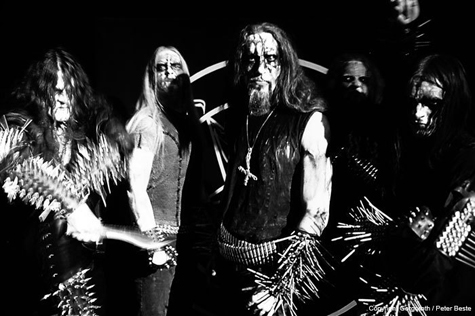 Remember when heavy metal was the devil’s music? Before Korn and Limp Bizkit got jocks involved, even before Poison and Guns N’ Roses started getting chicks hooked on screaming riffs, metal was solely the domain of misanthropic losers who had a boner for Satan. Now, with the rise of the Guitar Hero / Rock Band phenomenon, the once lonely dark forests of the metal realm are now erupting in five-alarm bonfires. I mean, even Christians like the dudes in Underoath have joined the party in greater numbers. Christians! As a lifelong metal fan (I like other forms of music too, obviously, but I’ve been into metal for as long as I remember), I see this as a mixed blessing: While I miss the rebelliousness of metal’s past, I’m happy I no longer have to face public scrutiny if I’m driving around and wailing along to Iron Maiden’s “Fear of the Dark” with the windows down.

This wasn’t always the case. If you were alive in the ’80s, you may recall that every news source / church group / parent / what-have-you were railing against the evils of heavy metal. On Oct. 16, 1984, a 19-year-old by the name of John McCollum shot himself while listening to Ozzy Osbourne’s “Suicide Solution.” In January 2006, McCollum’s parents took Osbourne to court, claiming that his song was to blame. The claim was dismissed, but the bug was planted. Bands like AC/DC, Black Sabbath, Judas Priest and even poseurs like Mötley Crüe came under fire for corrupting young minds and coercing with the Dark Lord. I even came under fire in my own family, while I was just in fourth grade, as a cousin berated me for my love of metal. She told me it was the music of the devil and if I kept listening to it, I’d rot in the festering pools of hell (something like that); and I think it made me cry like a bitch.

It’s not like that any more. Metal—though forced to sit at the weird relatives table—has become an accepted member of the musical family. No longer is it harmful to your body, mind or soul. It was simply misunderstood… OR WAS IT?

A recent study led by Dr. Michael Miller, from the University of Maryland Medical Center in Baltimore, concluded that listening to “joyful” music is healthy for a person’s heart. Meanwhile, listening to “heavy metal” causes anxiety.

According to an article on Telegraph.co.uk., results of tests performed on 10 healthy, nonsmoking volunteers showed “Stressful or disturbing music “¦ narrows the arteries and may be bad for the heart.” Joyful music—like John Denver—caused subjects’ arteries to open 26 percent wider, while music that made them “anxious” caused their arteries to narrow by 6 percent.

This may very well be true. The music I love may be killing me. But then again, so are the beer, whiskey, red meat and pollution. I’m pretty sure the dudes in Gorgoroth couldn’t care less about my health anyway, and I’m glad they couldn’t. Unhealthy things are just more fun. My arteries are just going to have to get tougher, because I don’t think John Denver is going to work his way onto my Shuffle anytime soon.