It’s been difficult to find anything to write about—other than the obvious. You know who won you know what, and hopefully we’ll all be better off for it. I’d like to think so, but I guess time will tell. For now, the future certainly seems a brighter place.

Speaking of the future, it’s become fashionable to bemoan the fact that science, technology, the Japanese, what have you, still haven’t bestowed us with the flying car. Or maybe I’m just hanging out with the wrong people. I was a big fan of the Back to the Future movies too, being a child of the ’80s and all, but could you imagine what that would really be like? I think the result would be more like what was depicted in Luc Besson’s Fifth Element—congested, nasty and extremely dangerous. Think about your morning commute. Now think about that asshole drinking a soy latte, smoking and fucking with his iPhone while driving the car beside you. Now imagine picturing him piloting what amounts to a personal jet. Flying cars suddenly don’t sound all that appealing.

I’ve never been all that stoked on flying cars. Becoming a cyborg, however, is a different story. I understand those who’d rather not mess with Mother Nature. The human body truly is a miracle; I think even us godless heathens would agree to that. But some are more of a miracle than others. Maybe Nature blessed you with great hair, good eyesight, athletic acumen and chiseled bone structure. I wasn’t so lucky. A bit of a hardware upgrade certainly wouldn’t hurt. Enter the Japanese.

Honda may or may not be working on the flying car, but they’ve been busy on the robotics front. The Japanese motor company has created a robotic leg aimed at assisting the physically disabled. According to an article at Dailytech.com, “The new robotic leg assists the user’s natural movement and exerts significant force to take stress off the users’ joints when walking, travelling up stairs, or ‘semi-crouching.'” The device runs on a lithium ion battery and runs for two hours per charge. Honda says the robotic leg is ready for real world testing and works with its user’s center of gravity to create a natural movement. This is a wonderful technological advance for sure, one that could certainly help a lot of people, but I do admit it’s a little boring. Don’t worry, though, there’s more. 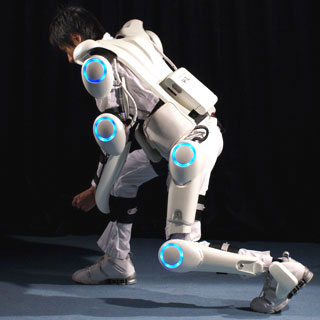 The Japanese are an industrious people. If you’re familiar with anime, you know they also have a fascination with giant robots (and tentacles, but that’s for another column). Japanese technology company Cyberdyne has developed a robotic exoskeleton. It is said that this device could even allow partially paralyzed people to walk again. Weighing just 22 pounds and boasting five hours of battery life, the exoskeleton has the power to nearly double the strength of a healthy adult. According to Dailytech.com, “Someone who could leg-press 250 pounds would now be able to life 450 pounds with the help of the suit.” Furthermore, Cyberdyne is also developing a 60-pound full body suit (I know!), suggesting that the device be used for “heavy labor support at factories, and rescue support at disaster sites, as well as in the entertainment field.” If by entertainment they mean robot-on-robot mighty mech showdowns on Pay-Per-View, then I’m all for it.

It’s just the next step in human evolution. Sometime in the distant future (or maybe not too distant future) babies will be fitted with USB ports—you know, that Matrix shit. But I’m not fearful of this new cybernetic dawn. What makes us human will always be there no matter how much after-market gadgets we bolt on to brains. We won’t be better or worse, just different. Well, maybe better; hopefully better, because once I get my robo-legs, the NFL better watch out.