It was a hair past midnight. We were entering a land where words were meaningless (at least to us). After a short skip across the continent, we had arrived in the medieval city of Prague.

Prague is the embodiment of beauty. The aptly named “old town” area of the city is filled with immaculately maintained gothic architecture. Feeling lost in the Lego castle of my childhood dreams, Brocephus snapped me out of my daze in time to realize what else we were surrounded by: beautiful women! Each was prettier than the next and my jaw began to hurt from scraping on the cobblestone sidewalk. We had truly found “Eye-Candy Land,” and I refused to blink for the next three days. As if my senses weren’t already overwhelmed, we soon noticed that the main drag was lined with strip clubs, bars and hot dog stands. The innuendo was heavy as I saw many bangers eating foot-long dogs like champs (bangers having bangers?).

However, not all was good in Prague. For example, Czechs use consonants like they are going out of style and put them where they can’t possibly go. With street names like “Truhlarska,” asking for directions was out of the question. Fortunately, I had my trusty Garmin to guide me”¦ or so I thought. In honor of my country, I decided to take a piss in a Subway bathroom (word to Jared!).

There I was ready to free of my bladder of its burden, when all of the sudden the Garmin slipped out of my hoodie pocket and into the bowl. A small splash and a few bubbles provided the eulogy for this burial at sea. Jared, like the Garmin, you are dead to me. With furrowed brows, we wandered Prague aimlessly until it was time to move on to our next destination: Amsterdam!

The effects of the wide availability of marijuana quickly became apparent upon our arrival. Walking through the airport, we were trapped in a bottleneck created by an employee who parked his cart in the middle of a narrow walkway to enjoy a sandwich. As people pushed past him, he starred out the window in complete and utter bliss. I should have realized that I too would be there soon. 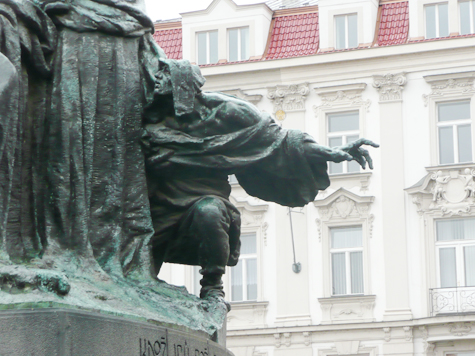 Amsterdam is the kind of place where the average 16-year-old American male might go into seizure from overindulgence. Brocephus described Amsterdam as Disneyland with weed and hookers. Though I didn’t see Walt Disney’s frozen head, I did catch plenty of people losing their minds. While it wasn’t quite ghost ridin’, I saw people jumping out of cars to dance in the streets (which I caught on video). I really can’t blame fools for losing it, though. Imagine being surrounded by lingerie-clad women, weed, drank and food; now add narrow streets filled with people, cars, bikes and scooters. Throw a few canals into the mix, and you have Amsterdam.

The weed alone is enough for some people. Amsterdam is full of “coffee shops” that sell herb in its various forms. There are detailed “descriptions” of each type’s supposed effects that include such phrases as “uppy high without a comedown” and “no munchies” to fool hippies and weed nerds. Despite the help, we managed to meet a German guy who happily purchased some Thai weed that looked like it came off a brick (do some research, homie!). Others ignored warnings and bit off more than they could chew.

For example, there we were, on the back patio of the “Jabba the Hutt”-esque Flying Pig Hostel. A dude from New Jersey and I talked for about 10 minutes before he inexplicably toppled like a tree. Down he went, face first with one hand at his side and the other clutching a McDonald’s cup, which exploded upon impact. He awoke for about two minutes before crashing again. Fortunately, he was placed in the loving hands of a bartender/attendant who gently whisked his high ass off to dreamland.

He may as well have stayed awake because Amsterdam is a dreamland in and of itself. Only in a dream could I absorb so many toxins and still live. However, like all dreams, my time in Amsterdam had come to an end. So, with space cakes in our stomachs and visions in our heads, we set off for Switzerland!