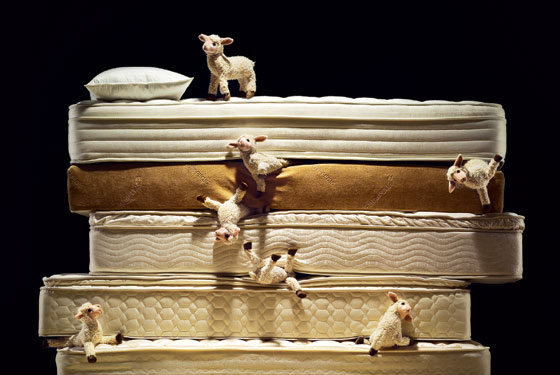 As a child, I abhorred sleep. I think bedtime in my house was around 9 o’clock, which was just way too early for me. As soon as I could hear my mother’s footsteps hit the end of the hall after tucking me in, I’d sneak out of my room in my yellow Knight Rider onesy and crawl under the dinner table until I could see the TV. I’d lay there and watch until my parents caught me, and when they did, I’d pretend to be asleep to evade punishment.

As an adult, pretending to sleep sounds ridiculous. After a long day of work, I am exhausted and in need of rest; pretending just isn’t going to cut it. It’s as preposterous as pretending to eat. I’m dying without either one, so there is no need to bullshit. I need real sleep and lots of it, so give me a comfortable bed, a nice pillow and some blankets, and I am a happy man.

It wasn’t always this way. But for a few blissful periods, I have not slept well for some time. Longtime readers can probably imagine that it is hard for me to quiet my brain long enough to fall asleep. I’ve tried soft music, aromatherapy, eye masks, melatonin, alcohol and other things to help me catch a few winks, but nothing seemed to work with any regularity. I dreaded the thought because of the expense, but I knew there was one more thing I could try to find sleep. It was time to get a new bed.

I last bought a mattress in 2006, and it seemed good at the time. My bed before that had been one of those extra soft pillow-top numbers, which contributed significantly to my eventual sciatica diagnosis. Sleeping in that soft bed made my leg burn from ass to toe, and I couldn’t take it anymore. I got a firm mattress to keep my jacked-up leg in check, and it wasn’t bad at first. My back was feeling better than it had in a while, and with the additional assistance of acupuncture, my sciatica was under control in no time flat.

Life was good, at least for a little while, but these last couple of years or so have been a bit rough. After eight years, that old bed, she ain’t what she used to be. My literal pain in the back was one of those spring-jobbies and the dents from my ample behind were firmly etched into its surface. No amount of mattress spinning would fix it. Even if I figured out a way not to fall into a mattress crevasse, I would still have to contend with the squeaks.

The cacophony that arose from that bed from any movement could wake up the dead. It sounded like a jackhammer on a trampoline. It sounded like rabbits fucking on an old rusty teeter-totter. It was unbearable. If the noise didn’t get you, the movement would. If anything touched the bed, I would be bounced awake immediately and alerted to its presence.

While it started out good and at least lasted as a sort of security system or death rattle, that old bed had finally lost its usefulness. The Sandman needed his dues and thanks to a fortunate event, I had the money to rest easy again. A new bed would be purchased and the subsequent sleep obtained from it would be glorious!

Mattress shopping is sort of an odd experience. It may be the only place that loitering is encouraged. Go ahead, lie down on whatever you want. A room full of white rectangles of varying rigidity awaits you, but it’s hard to know where to start. You need an expert and hopefully the store has one on hand.

Be forewarned: these salespeople, while helpful, may seem sort of creepy. It’s an inherent part of the job. They are supposed to walk you around the store and watch you lay down on beds to figure out what you like. They will tell you to get comfortable while they stare at you and ask questions. The only other time this sort of relationship exists is in a psychologist’s office. It can be a bit unnerving, but don’t fret; they are just there to help you find the bed of your forthcoming dreams.

That’s how it went for me, at least. I went the Tempur-Pedic route this time, and I’m loving life. This thing is like sleeping on a cloud. My new bed is softer than a Drake song played at low volume in a candlelit room, but because of the memory foam, it’s also supportive like a Drake song when you are feeling down. It’s the best of both worlds really.

I used to hate going to bed, but now I can’t wait to lie down. I don’t know how I did without this wondrous bed of mine for so long, but what a fool I was to try. Falling to sleep is no longer a problem. I feel tired the instant my body touches the mattress now. I guess I finally figured out what my mom was trying to teach me all those years ago. Bedtime really is good.