Giant Squid’s Aaron Gregory on His Worst Show Ever 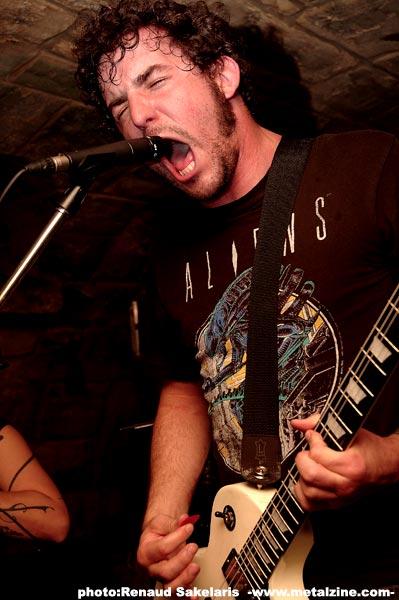 I recently interviewed Giant Squid’s Aaron Gregory. The interview will appear in issue #26 of Submerge (our one year anniversary!), which will be out Monday. This portion of the interview didn’t make it to the print version, because we’re limited by space, and I thought it would be more prudent to leave in all the nerdy bits about metal, the sea and comic books. You know, all that important stuff. This bit didn’t really fit in with all that, but I thought it was a funny story. Here, Gregory recounts the not-s0-fun time he and Giant Squid had opening for the Melvins at The Boardwalk last summer.

Giant Squid’s new album is due out Feb. 3, and it’s really good. It’s called The Ichthyologist and will be released by the band, limited to 1,000 copies. So get on that before it’s too late. [Photo by Renaud Sakelaris, courtesy of the Giant Squid Myspace page.]

Why do you say that?

It was a fucking train wreck from the beginning. We got there, and it turns out that the Melvins and Big Business never, ever, ever have opening bands. Seems like the promoter forgot to read the contract that made that explicitly clear. The Melvins were pretty upset when we rolled in and said we were going to play. Then, of course, we were pretty upset because we came out for the gig. We were like, “Fucking A, open up for the Melvins, that sounds killer—and Big Business.” Luckily, the Melvins really manned up and let us do it. They were actually really gracious after a bit—after talking to the promoter and kind of chewing his ass out.

There was a big mix up with that, and we just didn’t feel wanted in some ways. It was a really last minute gig with our new drummer, too, so we didn’t have a lot of rehearsal, we didn’t have a lot of time to get our own fans out there. We pretty much learned about that gig until a week and a half before. On top of all that, we thought it would be a really good idea to try out all these brand new fucking songs we’d never played live, ever, that night.

[Laughs] Yeah, I guess at that point, why not?

Yeah, yeah. They basically gave us five feet of stage space to set up and play. We couldn’t move a single piece of Melvins/Big Business gear, so that was a little difficult. All those things combined, I don’t know. It was a little bit of nerves, a little bit of frustration and anger. You saw it. We played. We choked through it, but we really fucked up a lot. Luckily it was all new songs, so people probably wouldn’t be able to tell too much. But it was bad. We’ve had some bad luck with Sacramento shows. Our show with Earth was bad like that. By the time we’d gotten up there, we were too tired and drunk, and everyone was falling asleep by that point too.