Give Me A Little Sugar 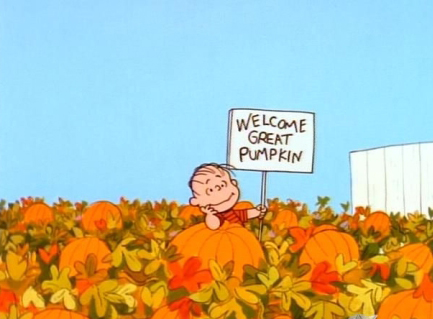 Halloween can mean a lot of different things to a lot of different people. For some, it might be dressing up in costumes, be they of the normal, scary, silly, creepy or sexy variety. For others, it’s about trick-or-treating, haunted houses and carving pumpkins. Naturally, each experience is a little different, but they all have one thing in common: that sweet, sweet, candy.

Candy is dandy. The candy man can. Candy girl, you are my world. We all know the sayings. It’s like we’ve been indoctrinated to love the sweet stuff and the propaganda appears to be working. In 2009, the U.S. Census Bureau noted in its fun list of Halloween statistics that Americans consume an average of 24.3 pounds of candy per year. Surely, that is plenty of sugar for any mere mortal, but would you expect that to satiate a god?

If you weren’t already aware, every god has a bit of a sweet tooth, but none are more hooked on the sugarcane than the God of Halloween himself, the Great Pumpkin. In addition to running the trick-or-treat racket, the Great Pumpkin is also responsible for lost souls. Helping them find their way can be tough work and he finds that part of his lordship to be a bit morose, so he eats candy to forget about it.

Now the Great Pumpkin can easily eat over 24 pounds of candy in one sitting, but, until 1967, no one knew how much he could eat in one year. That all changed in October of that year when the world found out exactly how much the Great Pumpkin loved him some candy.

It had been a tumultuous year with the country’s ongoing involvement in the Vietnam war and racial strife at home. The hippies had found a way to fuck and smoke away the pain, but neither was an option for the Great Pumpkin. For smoke to emanate from his mouth, the Great Pumpkin would have to be carved, and he was not about to let some foolhardy human jam a knife into his flesh and fill him with fire. While his stump could serve as some sort of rudimentary penis, he derived no pleasure from it and found the idea of someone sitting on his head to be, ironically, beneath him. Sex was out.

So he ate. Snickers, Watchamacallits, Baby Ruths, Butterfingers, M&M’s (both plain and peanut), Reese’s Peanut Butter Cups, Pay Days, Milky Ways, 100 Grands, Abba Zabbas, Twixes (Twixi?) and Kit Kats were all on the menu. He even gorged on the dreaded Necco Wafers. He devoured 50,000 pounds of Sour Patch Kids alone, leaving his pumpkin tongue raw and stained with the multicolored blood of thousands of innocent gummi-children.

By Halloween Eve of that year, the Great Pumpkin had grown so large that he could no longer get out of bed on his own volition. No one had heard from him in weeks and when they went to investigate they found him alone in his room, oozing pumpkin slime, buried in a sea of candy wrappers. He was nearly the consistency of pumpkin pie, and, being filled with chocolate, twice as delicious.

Santa knew a different approach was in order. Santa tried to empathize with him. He told the Great Pumpkin about the winter of 1942, when he had eaten too many cookies and found himself trapped in a chimney in Boise, Idaho. It took all nine reindeers, Frosty, Mrs. Claus and six elves to pull him out and he ended up losing his beard and a pair of red pants in the process.

The Great Pumpkin thought of Santa stuck in that chimney and realized that he too had trapped himself in his own room by eating all that damn candy. He knew how it felt when Santa lost his beard, because he too felt ashamed of what his candy crush had done to his body.

By Halloween 1967, he had eaten almost 4 million tons of candy and it showed. The only candies left in his wake were buttered-popcorn-flavored Jelly Bellys, black licorice, Twizzlers, candy corn and Almond Joys. No one wanted to eat any of those, so Halloween was cancelled that year due to lack of interest.

By the summer 1968, with the help of his friends, the Great Pumpkin had regained his bottom half of an hourglass figure and, working closely with the Mars Chocolate Company, he was able to get them to release their popular candy bars in bite-sized packages. The smaller size still gave the Great Pumpkin the satisfaction of eating candy without all the caloric guilt. He deemed them to be perfect and the small candies gave him great joy. In his eternal wisdom, the Great Pumpkin decreed the new candy “fun size,” and the rest is history.