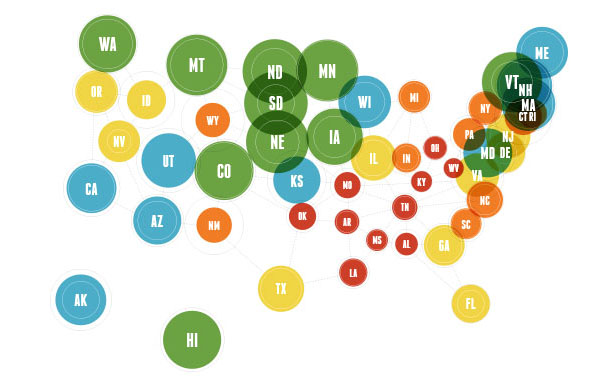 I’ve never been to Hawaii, but it sure does look nice on television. Leis, pineapples, volcanoes, surfers, all those beautiful beaches…you’d have to be a pretty miserable prick not to love it there. And as it turns out, for four years straight, Hawaii—unsurprisingly—scored the highest in the Well-Being Index, according to Gallup and Healthways. However, in the recently released 2013 poll, Hawaii has been dethroned by a very unlikely usurper…none other than North Dakota.

I know what you’re thinking: Is North Dakota even a state? Believe it or not, it is! North Dakota is the 39th state and was admitted into the Union in 1889. Its state motto is “Liberty and Union, Now and Forever, One and Inseparable,” and at a population of more than 720,000, it contains fewer people than San Francisco. Crazy, huh?

It’s also not the Dakota with Mount Rushmore. That monument resides in Keystone, S.D. Yes…there’s a South Dakota too. I guess around that time, they ran out of state names and were just like, look, just slap a “South” on it and call it a day.

The Gallup-Healthways Well-Being Index score is an average of six sub-indexes: Life Evaluation, Emotional Health, Work Environment, Physical Health, Healthy Behaviors and Basic Access (such as to healthcare and insurance and whatnot). The score is calculated on a scale of 0 to 100 (100 being the ideal). As a nation, the United States’ overall well-being has held steady around a score of 66 since 2008; it dipped from 66.7 to 66.2 between 2012 and 2013. Honestly, I did feel .5 crappier last year. It kind of sucked.

How did North Dakota get such a high ranking? According to Valleynewslive.com, several factors could have played a role. The state is currently No. 2 when it comes to oil production, it has the lowest unemployment rate in the country and the number of North Dakotan millionaires has tripled since 2005. But it’s not just the big cheeses reaping the benefits: McDonald’s workers earn $11 per hour and may even receive signing bonuses; waiters and waitresses can earn up to $750 per day and exotic dancers can carve out a yearly salary of (I hope you’re sitting down) $350,000.

North Dakota is so prosperous, its well-being is contagious. Each of the three states that border it is ranked in the top 5 of the Well-Being Index: South Dakota, No. 2; Minnesota, No. 4; and Montana, No. 5. South Dakota’s southern neighbor Nebraska chimes in at No. 3.

In case you were wondering, California, which scored a respectable 67.6 (2.8 points off the leader), landed outside the top 10. So it would seem that all the Jamba Juices, Cross Fitters and locavores in the world don’t stack up to a population of well-paid strippers, but such is life. Hey, at least you’re not West Virginia, which for the fifth year straight landed at 50th on the list with a woeful Well-Being Index score of 61.4.

I have to say, I’ve visited West Virginia a couple times, and it’s not all that bad. It’s got pretty, lush, green mountains; scenic rivers like the Monongahela; and a fun college town in Morgantown (go Mountaineers!). I spent a great afternoon in Morgantown this one time, getting drunk on excellent local beer at this great bar where I chowed down on a massively delicious cheesesteak and smoked dirt-cheap cigarettes I bought from the corner store… OK, so maybe that’s why it’s not the healthiest place to live, but I had a blast.

I guess I just feel bad for West Virginia. It’s just kind of tucked away in the armpit created by Virginia and Pennsylvania, as if it was just an afterthought. Now for the past five years, it’s had the stigma of being the worst place to be in America.

Sure, it’s just a poll and an arbitrary number, but we’re a country obsessed with polls and arbitrary numbers. The results of the Well-Being Index are based on interviews with just 178,000 Americans from all 50 states, which is a small fraction of our entire population, so there’s probably a large margin for error. Maybe there’s a whole bunch of people who think West Virginia is the best place ever… I mean, there must be one.

Meanwhile, the rest of us might want to consider a new Manifest Destiny. Our forefathers crossed wild terrain and treacherous mountains traveling from the East to find a better life in the West. Maybe it’s time for us to pack our parkas and comforters and start the caravan to the Northern Plains. At least all we’ll have to do is hop on the Interstate.