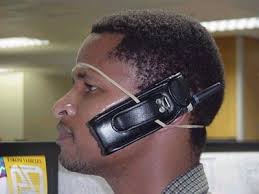 If we have known each other for longer than a year, you probably are aware of my issues with cell phones. Here is a fun fact: I did not have any form of on-person communication until I was 27 years old. That includes pagers, two-ways or cell phones. Unless you had two cups and a long-ass string, we talked face-to-face or on my home phone (what you hipsters call “a landline”). Like all good things, my cell phone-free life eventually came to an end. I held out for as long as I could, and even though I finally got one, I still had issues.

One of the main reasons it took me so long to get a cell phone was that I didn’t like the way many people acted on their phones. I always despised the people that broadcast their conversation to the entire room. No, asshole, I don’t care that you just bought a new Benz or that you haven’t talked to so-and-so for ages.

With the shrinking of cell phones, the phenomenon began to spread. All I could do to retain some form of sanity was to fill in the other half of the conversation in my head: “That’s really too bad about your sister being a whore,” and, “Don’t worry, just put a little cream on it, that rash on your balls will clear up in no time.” It was like live-action Mad Libs.
It got worse when people started wearing the wired earpiece. For several months, I thought strangers were having random conversations with me on the street. I wasn’t sure if I was going crazy or they were. Everyone had a wire sticking out of his or her ear. It was like the secret service and local newscasters were everywhere. They walked and talked, staring blankly off into the distance, caught up in a dream world of their own importance.

Of course, when they weren’t walking, they were driving, thus combining two things that tend to piss me off the most. I was a commuter for a few years and you would not believe the dumb shit I saw on the road: people talking and eating at the same time; people with a cell phone in one hand and an electric razor in the other; and people texting while reading the paper. Of course, these “multi-taskers” were oblivious to anything around them, which was why they weaved all over the road while going 50 mph in the fast lane. By the time I stopped commuting, I thought I had carpal tunnel in my middle finger from serving up fuck-yous all over the causeway.

Apparently I wasn’t the only one who daily feared for his life. This year the California Legislature passed a new law banning all but hands-free use of cell phones while driving. Today, wires are out and Bluetooth is in. I think it should be renamed Redtooth due to the countless accidents that will be caused by using that ear-clinging bastard. Any hopes of increased safety can be put to rest once you try answering the phone with one of these while driving. First you have to find it, then get it around your ear, turn it on and hit the answer button. By the time you’ve achieved optimum talking position the call is gone. Some of you are saying, “Why not just leave it in?” I didn’t want to be the one to say it, but you look retarded.

Making a call is twice as fun since voice recognition technology is total crap. “Call Paula” apparently sounds like “Call Corey” to my buddies at Verizon. Cussing at the phone only leads to awkward conversations during which the phone decides you are trying to call someone. Thank God, I don’t know any Chucks, Kits or Richs.

Human beings were meant to do a lot of things; having a phone hanging off your ear all the time is not one of them. Some of you think your phone makes you look cool. I see you around town flossin’ that Bluetooth, talking on the phone while you eat lunch with a friend. Take that shit off”¦you are being an asshole and you look like you sell books for Time-Life!