Before You Get Too Thankful 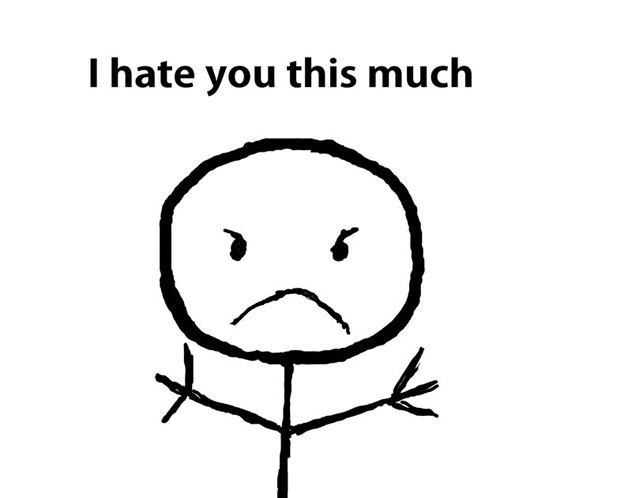 Halloween is done and Thanksgiving will soon be here to stuff your body cavity full of sleepytime meats. While I always hope to break my three-plate mega-meal record set back when I was a portly teen, I also know that Thanksgiving is about more than that. During this time of year, we are supposed to reflect on all the things that we are thankful for and spend time with the ones we love.

But what about the ones we hate? Are we just supposed to let them off the hook because mom makes a mean turkey and you miss your brother? I’m afraid we just can’t afford to do that. The world is already out of balance with assholes, so we have to keep fighting if we hope to right the ship. After all, if you give an asshole an inch, he will cover that inch in a filthy layer of shit; and that’s not good for anyone.

That is why I’m calling for a national day of hate on Nov. 14, 2014. Formally known as Hate Day, our new holiday will be situated at the midpoint between Halloween (the day that you drank too much while wearing an uncomfortable costume) and Thanksgiving (the day you have to get along with your family for an entire meal). That date was chosen precisely because it presented the optimum blend of blinding hangover along with anxiety brought on by exposure to your family. On that day, your hate level is at its strongest, so you should just go with it.

On Hate Day, you get to tell the ones on your shit list exactly why they are there and what they need to do to get off of it. I know it sounds great, but be prepared to face some hateful talk yourself. Hate Day is a two-way street. In fact, mutual hating is widely encouraged as it is the crux of the holiday. Only through mutual hating will we finally get to hear each other’s complaints and come to some sort of understanding. Hate Day is about constructive hating and it just may change the world.

Take the police, for example; no seriously, please take them before they kill us all. The current relationship between police and the policed is untenable. Right now, cops kill black teens with impunity, leading to protests, which then lead to cops beating and unlawfully arresting the protestors until the Department of Justice steps in and returns everything to the status quo. On Hate Day, cops would have to put down their arms and actually listen to the people they police.

On Hate Day, you get to tell cops that you hate getting tased 20 times, or shot at when you are unarmed. The best part is that the police can’t then tase, beat or kill you in response. You can tell Johnny Lawman that you hate it when he puts you in a chokehold until you die or that your kids hate it when he throws flash grenades into their rooms at night. In return, cops could express to members of the community that they hate it when they have to chase people on foot or when people go into PCP rages during arrests.

By allowing each side to hear why they are hated, each can begin to understand why the other behaves as they do during their interactions. That kind of understanding can be useful in other relationships beyond citizens and cops. You can tell your dentist that you think he was too stupid to become a doctor and that’s why he sticks his hands in people’s mouths all day instead of saving lives. You can tell him that his sandy toothpaste is shit, and he needs to stop being stingy with the rinse water.

In return, your dentist can call you out for lying about flossing all of these years. He can tell you that your breath smells like shit and that he must be smarter than you since you are the one letting him put his hand in your mouth. At the end, you can say, “touché” and shake his hand before parting ways with a newfound understanding of each other.

Of course, to get Hate Day off the ground, we are going to need the help of the most hateful bunch of sons of bitches in the whole world: The United States Congress. Those bastards would smother a newborn baby with a puppy if their hands weren’t already too full of dirty money to hold the dog down. Being the haters they are, they could either embrace Hate Day with lust or deny us our day of hate out of spite. Hopefully they make the right choice, but, if not, you can bet I’ll be the first person hating back. For whether Congress or anyone else approves, the spirit of Hate Day is out there. It is in me and now it’s coming for you. Will you hate back?