In a World of Make Believe 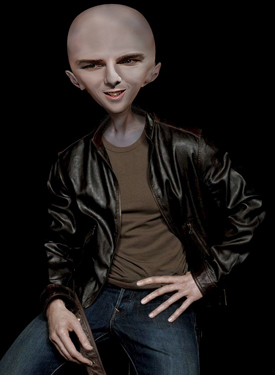 We live in a world of make believe. People can literally make people believe something is true when it isn’t. No longer do we need to back up our stories with cumbersome “facts.” We just make them up as we go. The average American is way too lazy to actually verify the veracity of a piece of information. And eventually, if repeated enough, something make believe becomes true. Talk about manifest destiny! Our politicians and celebrities have shown us that the sky’s the limit when it comes to bullshitting things into existence.

John McCain is the inspiration behind the Six Million Dollar Man. Of course, the story was embellished a bit as McCain wasn’t left with any bionic powers, just a robotic colon and a penchant for rich women. On an unrelated but still shocking note, McCain was born in Mexico and later smuggled across the border of Arizona. What a maverick!

Not to be outdone, President Obama was actually born in Guantanamo Bay to lesbian Islamic terrorists! That explains why he won’t close the Cuban prison and why he hates America so much. And get this: he is racist toward both black and white people! What a hater! Still, he’s no Dick Cheney.

Some of you are already aware that Dick Cheney coined the popular phrase, “Go fuck yourself,” but did you also know that he shot and killed Alexander Hamilton in a duel? Before dying, Hamilton was able to land a shot to Cheney’s chest. While he did survive Hamilton’s blast, the injury has continued to cause him heart problems until only very recently when his heart was replaced with a pig’s anus.

Michael Steele might not be a pig’s anus, but he has been compared to a horse’s ass. Michael Steele is also a double agent for the Democrats charged with wasting the Republicans’ campaign money on S&M clubs, private jets and vacations to U.S. territories that lack the power to vote. If you ask me, the man is doing one helluva job!

Speaking of doing a helluva job, have you noticed that since the last election Sarah Palin is on television all the time? I heard it’s all part of her master plan to retake the mayor’s chair in Wasilla, Alaska. While most view this as a step backward, Palin believes being governor was “just too dang hard.” She’s also under the impression that Obama gets to be president until he dies. But it’s OK; she has bigger fish to fry now. Literally. Sarah Palin caught a 200-pound mud shark off the coast of Alaska. She named it “Glenn Beck” and will have it stuffed and mounted in her already impressive trophy room, right next to the head of our 26th president, Teddy Roosevelt.

These days, everyone is all about Justin Bieber. Most of us have heard of the teen pop phenom, but did you know that Bieber was born a conjoined twin? His twin sister didn’t survive the birth, but her sex organs made the journey. For his sister’s sacrifice, Bieber is now the proud owner of both a penis and a vagina. Fortunately for his singing career, he lacks any balls whatsoever. He also has a hard time with playground slides due to his horizontal ass crack.

While we’re on the subject of crack, let’s talk Mel Gibson. Mel has gotten a bum rap. My sources say he isn’t racist. In fact, his cleaning staff is made up entirely of minorities. He always uses Jewish lawyers and accountants because “they really know how to screw people.” And the rumors about his abusiveness toward women are just misunderstandings. He is not abusing them; he just likes to touch them really hard in the face, repeatedly. Unfortunately, the rumors about his appetite for baby flesh are true. But don’t hate him for that. After all, a man’s got to eat, right?

A man has to do a lot of things, but Tom Cruise is no man. Tom wasn’t born of this planet. Before he came to Earth, he went by the name of Xenu, and he was the ruler of the Galactic Confederacy. In addition to changing his name, Tom also changed the name of this planet from TeeGeeack to Earth. Tom was using the planet to blow up fellow space men so he could collect their “thetans.” He was captured and locked up in an undisclosed mountain for many years, but he recently escaped. Don’t let him jump on your couch!