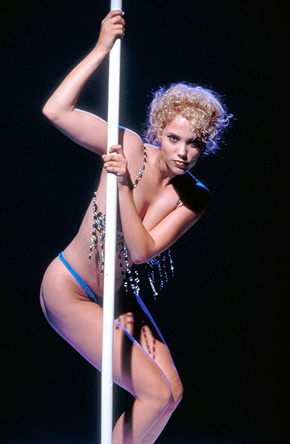 The first step is to drink or smoke more because you can’t do it once you’re there. You are looking for a balance between remembering every tawdry detail and maxing out your credit card from making it rain one too many times. I’ll leave the actual math to you, your liver and your wallet. Speaking of wallets, you should also hit the ATM since the surcharge on the machine at the strip club will slap you harder than that freaky stripper you just got a lap dance from. With money in hand and drank coursing through your veins, it’s time to roll.

All decent titty bars are basically the same. They have a bar that doesn’t sell alcohol, a well-lit stage with a pole and chairs surrounding it and a VIP room for lap dances. A classier place might also have a shower room. The air is filled with the aroma of hormones and pretend sex. The room is dimly lit, which is great because you don’t really want to get a good look at the other patrons unless they are women. Women customers are stripper magnets, which means freebies for anyone with a good viewing angle. But the freaks in the audience are merely a sideshow; after all, you are here to see a pro.

These professionals don slutty Halloween costumes or the more classic bra and panty or maybe nothing at all. Looks-wise, they run the gamut to best serve every weirdo that comes to the club. They don’t all necessarily have big fake tits, but a lot of them do. The ones with the biggest, fakest tits also wear the most body glitter. Stay away from those ones, lest you be smothered to death (unless that’s your thing). If you are smothered, you may notice that, for some reason, the strippers all smell the same. There must be some sort of communal lotion vat in the back room, but I’ve been unable to confirm it. It’s hard to look around with a naked girl in your lap.

When the girls aren’t on stage, they are making the rounds. They cruise the room like dogs, sniffing out money and playing best friend to any man not already dropping dollars on the stage. They sit in your lap in hopes of enticing you into the VIP room.

She asks your name and you ask hers. The stripper is named after a city, a brand of liquor, a type of candy or something that ends in an “a.” She asks what you are doing tonight, which should be quite obvious since you are sitting there with a stripper on your lap. Whatever you say, it’s up to you to keep the gravy train rolling, because once you stop, she is going to ask if you want to hit the champagne room. I usually try to get them to tell me their real names or talk shit about the corny DJ. Once I find the right one, it’s off I go.

Sitting at the stage is great, but the VIP room is where it’s at. You just need to keep an eye on the clock. Semi-enclosed booths make the perfect place for a little quality time with your new stripper girlfriend. She will do whatever it takes to keep you there including promising to meet you after she gets off work at 4:30 a.m. She’ll even say she’s bringing her girlfriend! By this point you’ve blown $300 in what felt like 10 minutes. You feel greasy, you smell like the strippers, you are covered in body glitter and you just spent next month’s car payment on some heavy petting. The night is done, and it’s time to head home. Spent as you are, you had fun and you hope it’s not too long before you are back again.