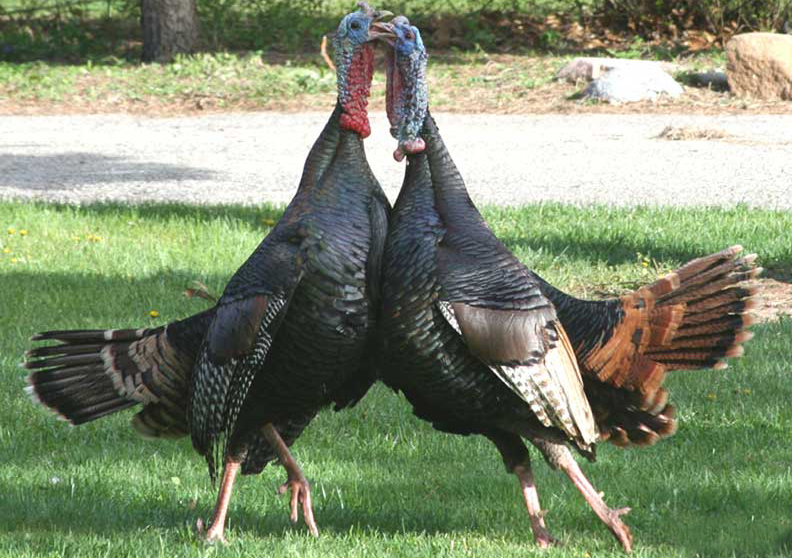 There are dinosaurs amongst us and they are out for blood! I’ve seen them lurking around my hood just waiting for someone to start something. I thought I had chosen a safe place to live, but I’m starting to think that I was wrong. In fact, if you don’t hear from me by the next issue, it will probably be because I am dead. Wild turkeys are trying to kill me.

The internet says that a group of wild turkeys is called a rafter, but I don’t think that’s an accurate description. Back in the day, a rafter meant “a large collection,” and while that does make some sense, it does not capture the essence of how that large collection of turkeys behaves. These wild turkeys aren’t just congregating awkwardly like a bunch of strangers waiting for a bus; they move with purpose and that purpose is to fuck you up. If a group of crows gets to be a murder of crows, then surely a group of wild turkeys should be called a gang of turkeys.

Calling them a gang just makes more sense. You never see one wild turkey by itself, and if you do, turn around quick because there are probably 10 more sneaking up from behind to peck you to death. These gangs of turkeys post up on the corner or on some porch and dare you to walk past them, just like a gang. And if you must cross their path, be ready; these turkeys are mad as hell and they’re taking none of your shit.

It’s no wonder wild turkeys are dangerous; these things really are living dinosaurs. Turkeys are the not-too-distant relatives of the velociraptors made famous in Jurassic Park, and we all know how vicious they were. A wild turkey is basically a mini version of a raptor—their beaks are sharp, and they also have spurs on their legs that can rip you open. Like a dinosaur, they are not to be trifled with unless your name is Fred Flintstone.

Did you know that wild turkeys are crazy? According to MentalFloss.com, “Male turkeys will attack anything that looks remotely like a threat, including their own reflections in windows and car doors.” Are you starting to get a sense of what I’m talking about? These turkeys are a menace to society! Go ahead and Google, “wild turkeys terrorize town.” The results are 10 pages long and almost every link is about a different incident. This is not a joke!

I’ve read that when people feed wild turkeys they get overly comfortable and start to challenge perceived threats like you and me. They will chase after people that get too close and if they catch you, they will try to jump on you and slash you with their sharp spurs like a bunch of assholes. When they aren’t actively trying to murder us, they spend the rest of their time doing “cool” shit like jumping on our cars, fences, roofs and trees, scratching, denting, shitting on and breaking everything along the way.

These maniacal turkeys also love to block traffic on busy streets just for shits and gobbles. You read that right: They block traffic just to take shits in the street and gobble at vehicles passing by. They like being bullies. One time, a gang of wild turkeys trapped me in my car and prevented me from opening my garage. I was coming home from work and saw a gang of wild turkeys hanging out in my yard. As I slowly approached the driveway, the gang turned and headed right for me. They ended up between me and the garage, trapping me in my car. I had to honk the horn and rev the engine a bunch of times before they decided to fuck with my neighbors’ house instead. It was a real standoff there for a minute.

Clearly these gangs of turkeys need to be dealt with. This is an issue that affects us all. Wild turkeys are taking over our streets and neighborhoods around the country, and only we can stop it. That’s why I am proposing a new federal holiday called Wild Thanksgiving. On Wild Thanksgiving, we will all sit down to a wild turkey dinner with our loved ones and crazy family members that had to be invited. It will be a celebration of the day we told those turkeys to back the fuck off! We are higher on the food chain and don’t have to take this anymore. If that doesn’t work, I guess we could also stop feeding these jive turkeys. Just a thought.